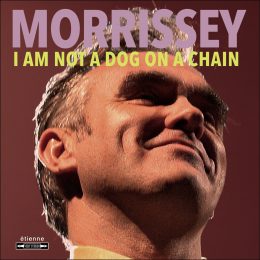 How many times do we have to teach you this lesson [1], old man?

Morrissey, our favorite gay (postulated) racist (dismissed) vegan (confirmed), released his 13th solo album today, March 20th, 2020. It is called I Am Not a Dog on a Chain, which is a fantastic example of just how kneecapped the self-awareness of the rich and famous can be. While Chain is a marked improvement over California Son, the album preceding this one, both records would be suitable material for playing over hell’s loudspeakers. Chain would simply be a few levels up.

Chain can be — rather neatly — criticized on three grounds. For one, the record addresses themes that Moz explored with greater nuance, passion, and kairos on previous albums, with Low in High School being the most appropriate example. Two, the album fails to live up to its sonic ambitions, likely due to Morrissey’s inexperience with the genres he was influenced by for this endeavor and on account of these same genres’ datedness. Three, much of the album sounds indistinct across its tracks, with the same timbre and cadence of its drums, the same generic synthesizer, and the same cliched “alt-rock” guitar tones. As a bonus point, Chain is his second-worst album cover. (The honor of first-worst goes to Years of Refusal [2].)

Lyrically, Chain dwells on the same topics that Morrissey has been yammering away about for years. We are all well aware of how Moz perceives himself: under attack, a vanguard of dissent, uninfluenced by the doings and opinions of his enemies. This was well and good when he sang about spending the day in bed; he was convincingly unbothered then. But to loudly proclaim that you are unperturbed for three straight years suggests that the opposite may be true, especially when you begin making grade-school level metaphors about your dissimilarity to leashed pooches. Aside from coping, Chain features washed-up political messaging, bemusing elitism, an uninspired love song, and a dash of vegan supremacy. This recipe for Moz Stew is very quickly getting stale.

Those who generally only listen to Morrissey and others who make similar music may find Chain to be something extreme, but this is simply due to a lack of exposure. On the electronic side, much of Chain sounds like abandoned Crystal Castles acid demo tapes, or what was considered “dance music” in England in say, 2002. Chain’s guitar-oriented compositions trend in a similar direction, half-heartedly hearkening back to some ghastly form of what rock radio was like two decades ago. It’s clear he didn’t take the time to familiarize himself with what an alt-tronica stomper or indie revelry should sound like. Glancing at the album’s credits, one notes that a certain Joe Chiccarelli is the record’s producer. Chiccarelli is known mostly for his work with indie bands popular in the late 2000s to mid-2010s — Minus the Bear, Cage the Elephant, The Strokes — and Chain looks like it may be an acute case of a producer-and-singer duo reliving their glory days on tape. In Joe’s case, that’s in half-baked alt-pop songs, and in Moz’s case, that’s in grandstanding about resilience. Chiccarelli has produced for Morrissey since 2014’s World Peace is None of Your Business.

Chain is consistent, however, in the sense that it all sounds mostly alike. A near-identical drumline is used on about 1/3rd of the album, the remainder being split between trap-influenced syncopated kicks, unnervingly quick house-like 4:4s, and whatever the pseudo-martial snares of the title track are supposed to be. The album’s electronic forays never drift too far from that of an electric organ or a squared-off, buzzy imitation of what Morrissey must imagine a nightclub sounds like. Much of this album could be classified as “filler,” as there are about three tracks that can be clearly distinguished from what surrounds them. Genericism seems to be Morrissey’s strong suit these days, though. It is easy to publicly flirt with controversy, make no committal statements about it, and then milk outrage/curiosity/admiration for an album cycle (or three.) Such a feat requires a load of tolerable blandness to market and fill the void with.

The end result is simply a snooze. I first listened to it while doing dishes, cooking breakfast, and replying to emails, and found it to be appropriate background noise for its lack of vigor. Closer inspection functionally confirmed that initial take, though I doubt I’d ever consciously put this album on for that purpose. The world has much better backdrop soundtracks to offer, like Cisco CallManager hold music [4].

Chain begins with “Jim Jim Falls.” It opens with the aforementioned “is-this-what-dance-music-sounds-like” arp and a high school band drum pattern. This quickly devolves into the sweaty sheen of the chorus, in which Morrissey advises some unknown crybaby that if they’re going to kill themself, they’d better get on with it to save face. Morrissey as a taunting provocateur is a rather obnoxious look. This track is clearly directed at his detractors, in a sort of watered-down “You’ve Got Everything Now” fashion, though this go-around Moz is behaving more like a MAGApede asking people if they’re triggered on Twitter.

“Love is on Its Way Out” is not much of a reprieve. It also has a cheap electronic backing track, a stilted hook, and Morrissey’s incoherent virtue-signaling political messaging — a contrast to the previous track, but not one that will convince or appease anybody. Apparently too lazy to write more than one verse, Moz asks if we’ve seen crying, nerve-gassed children once and rich people going on trophy hunts twice. Morrissey theorizes that the cause of all this, one can infer, is the fact that there is no more love to be had in the world. He ends the track by asking some unknown object of desire if they can show him what love is like.

“Bobby, Don’t You Think They Know?” is supported by Thelma Houston’s luscious voice. “Bobby” suffers from the same affliction of many songs on this album, in that it is composed in typical pop music structure, but is so chopped-up and unnecessarily affected in its delivery that it comes across as pretentious art-rock without the art. “Bobby” deals with the eponymous character’s “secret” drug addiction, and includes a bridge half-rationalizing the matter with the fact that everyone loves Bobby’s singing. Morrissey has always been fond of using music to tell short stories, and “Bobby” is in line with that tradition. Unlike his better work, however, it suffers both from its own lyrical sparseness and instrumental weight.

Title track “I Am Not a Dog on a Chain” is as corny as it is self-important. Rife with some of the worst metaphors ever recorded and bite-size aphorisms about what the “truth” is (hint: it’s not what’s in the newspapers!) over the top of what could be Photoshop tutorial muzak, “Chain” succeeds in accomplishing absolutely nothing. The track’s attempts at dramatic refrains do nothing more than point out that Morrissey is either losing his vocal range or his ability to be compelling.

“What Kind of People Live in These Houses?” is particularly ill-fitting. Instrumentally, nothing of note is going on; the same chords are played ad nauseam and session drummer Matt Walker pounds on the drumkit the same way he’s done several songs before. “Houses” is notable only for Morrissey’s decrying of the average normie as a waste of space. He’s not so much of a jumped-up pantry boy anymore, evidently. The title’s question is pondered for 3 minutes: t-shirts or blouses? Executives or laborers? But in the end, Morrissey decides they’re a miserable lot who vote the way their parents vote and watch too much television. He resolves the question himself: “Who cares what people live in these houses?”

“Knockabout World” is Morrissey welcoming some other malcontent to life under the crosshairs of the media. Tracks like this — and other art in their genre, like the endless parade of “edgy” comedians on Netflix — are patently ridiculous when viewed from our side. What has Morrissey lost, exactly, from being mildly politically incorrect? Absolutely nothing. One could even argue that he has gained from it; here he is, gleefully singing about the whole affair, and probably booking venues for a tour. He does not have the slightest idea what deplatforming is like, nor is it likely that he’s sympathetic to our causes, given his brand of English civnattery isn’t known for tolerance to our stated aims. To hear Morrissey gripe about the press must be what it’s like for a rough sleeper to hear someone gripe about poor service in a Michelin star.

“Darling, I Hug a Pillow” features a horn section and Morrissey missing the physical touch of a lover. It’s not particularly poignant lyrically, or compelling musically; overall, “Pillow” sounds like Morrissey and a bunch of session musicians writing half-complete pop tracks and drowning the white space in instrumentation.

“Once I Saw the River Clean” is not sure what it wants to be. Is it a dance track? Is it synthpop? Is Morrissey’s grandmother a remnant of the past? Are the “fathead youth” troubling depictions of the future? Whatever “River” is, two things are certain. It simply gets noisier as the track goes on, and Morrissey gives up on the pretense of making his lines rhyme about halfway through.

“The Truth About Ruth” could be interpreted as being about Morrissey’s discovery of a transgender person’s secret. The titular character, Ruth, is revealed to be John. Morrissey apparently couldn’t help but find out, as he’s a “sleuth” who “digs up the truth.” It is a “somber” track, built atop a meandering piano. Much like “Chain,” “Ruth” grasps desperately at crescendos and wall-of-sound operatics in an attempt to create drama, but succeeds mostly in creating a cacophony. Sooner or later, according to Moz, “we all calm down.”

“The Secret of Music” is nearly 8 minutes long. It is one of the album’s most distinctive tracks because it sounds like deconstructed jungle-industrial after coming out of a spin cycle in the washing machine. “Music” isn’t transgressive, interesting, or innovative; it’s just off. “Music” must have been what Morrissey rushed into the studio to record after skimming the Wikipedia page for “avant-garde,” given that he simply incoherently rambles on over the top of the instrumental. “Music” is a condensation of everything wrong with Chain. Its influences are pilfered, misunderstood, and misapplied. It contains several long minutes of aimless noise on what is supposed to be a solo artist’s record — and other musicians have done similar things and to better results a long time ago. It is the sort of stuff that insufferable women in their 20s will provide to an unimpressed date as an example of the “weird” things they listen to. The only excuse for a track like this, given its 8-minute runtime, is to simply fluff up a record’s length.

Chain comes to an end with “My Hurling Days Are Done,” an admission to growing old. Morrissey declares time to be no friend of his, joined by an instrumental that wouldn’t be out of place at some wedding afterparty in the 1980s. This track is also an addition to Morrissey’s large back catalog of songs that dwell on being alone. In his eyes, there is nobody to lament to, nobody to hold, and nobody who understands him. Morrissey is an enigma, a man who speaks the truth and is attacked for it. Morrissey, the undefinable.

I think I have a definition, though. It’s one appropriate for an aging person who lacks self-awareness — and prides himself upon it.

Morrissey is a Boomer.