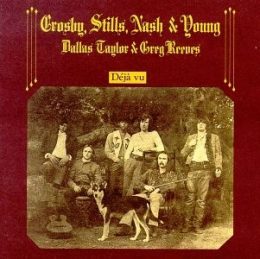 Déjà Vu, Crosby, Stills, Nash, and Young’s first recording as a quartet, was released on this day, March 11th, in 1970. It was greeted with a mixed reception by critics at the time of its release, but has since come to be included in innumerable “best of” lists and is frequently cited as the best work of the group. Taken as a whole, Déjà Vu displays impressive attention to detail and warm, friendly tone, but similarly lacks much of the impact, relevance, and innovation missing from “jam band” releases during the time period. Déjà Vu, is, however, markedly better than several contemporaries; this may be due to the influence of personal misfortune on the album’s songwriting. While other albums in similar style at the time had no real reason to exist, Déjà Vu followed a series of heartbreak and loss in the band, and this pain is reflected in their lyricism and oft-somber melodies.

The band is a supergroup, famously composed of David Crosby of the Byrds, Stephen Stills of Buffalo Springfield, and Graham Nash of The Hollies. They were joined by Neil Young for this record — their only studio record, as their following release was a live album — and thus released the album under the name Crosby, Stills, Nash, and Young. Also credited are drummer Dallas Taylor and bassist Greg Reeves. Jerry Garcia of the Walking Dead makes an appearance on “Teach Your Children,” playing pedal guitar.

It’s worth noting that the band came as a result of each member leaving their previous musical projects; “CSNY,” as it is occasionally known, helped cement the concept of a pop supergroup that fuses well-known talent together when their synergy runs out with a band composed of lesser-known artists. CSNY was also famous for the ego of each of its members; Young left the band following the recording of their tour album, and the other members of the band frequently fought, broke up, reconciled their differences, and repeated the process. It’s a good example of too many cooks in the kitchen — though none of these men were particularly talented cooks, to begin with.

“Carry On” is the album’s opener; it’s also one of the album’s best tracks for its focus on the band’s remarkable capability to harmonize. Musically, it stays simple without boring; electric flourishes add texture to a track that touches nearly every corner of the frequency spectrum. “Carry On” has an optimistic message, albeit one that comes across as somewhat cliched in 2020. We’ve heard enough about “love coming to save us all.” “Carry On” is also notable for its two distinct phases and back-to-basics soloing at its conclusion.

“Teach Your Children” is one of the album’s most unfortunate tracks, a sharp transition from the first song. It’s built around an unimaginative, bluegrass-inspired melody and is devoid of the same near-angelic harmonization that was present on “Carry On.” Nothing changes significantly during “Teach Your Children,” making the song’s 2 minutes and 53 seconds a bit of a snooze.

“Almost Cut My Hair” oozes the lamenting attitude of the 1970s. It’s downtempo, ballad-like, and made complete with organ whistling and Crosby’s declaration of bourgeoise rebellion in the form of not cutting his hair. “Hair” might have been a bold declaration at the time, but it certainly hasn’t aged well. It’s difficult to empathize with a raggly-headed hippie and his fear of the police, especially in our circles, where we get arrested for things of much greater consequence and importance than smoking weed in public.

“Helpless” is another one of the album’s jam-session takes, and this fact is plainly apparent in its uninspired style and vaguely mystical lyrical soup. Young’s high-pitched vocals border on obnoxious for most of the track’s length. The insistence on handsily seizing Americana and its offshoots among pretentious, egotistic California jam bands is a blight on music history that may, unfortunately, never be recovered from so long as people continue to view music of this sort as appropriate to get high to. “Helpless” falls into a pattern typical of this album’s more somber tracks; while it displays maturity in subject matter and clean production, none of the band’s members have the vocal chops themselves to pull off a convincing display of their sorrows.

“Woodstock” is a cover of the Joni Mitchell song with a few rearrangements made. Both versions are classic rock radio staples, which is indicative of the track’s quality. Jimi Hendrix assisted in production on this track, which lent it a degree of spaciness and well-tuned EQ that undeniably works well for the track, but such advantages do not rescue its trite lyricism and uninvigorating structure.

Title track “Deja Vu” is more experimental than most of the album, opening with a scatted introduction and a beautiful guitar riff that serves as a solid backbone for the band’s harmonization. “Deja Vu” and “Carry On” are reminders of what this album could have been. After the high-energy introduction, “Deja Vu” breaks into a more contemplative tone, sounding more like the work of the era’s progressive rock pioneers than tired jam-band plucking. Lyrically, Crosby manages to convey his message without painfully dating himself. “Deja Vu” moves between its phases with a life that the listener can discern quite easily, and could easily be considered the record’s finest work.

“Our House” is a sweet, albeit somewhat bland ode to a significant other and their constant presence; Nash sings softly of mundanities, like lighting fires on the hearth, decorating the house, or tending to the cats, made remarkable because they are shared with someone that you love. Nash sings with a tenderness that breathes new magic into his verses and makes “Our House” into pleasant easy listening. It is musically unchallenging, but that is likely for the best.

“4 + 20” is a wistful and quiet track by Stills about his previous struggles of poverty, likening them to the emotional poverty of heartbreak. It is a strange metaphor to make, and one that perhaps comes across as insensitive or misguided, given that there is a substantial difference between loneliness and hunger. For this reason, and because of its uninteresting instrumental, “4 + 20” seems more like a whine by an out-of-touch celebrity than a song easily related to.

“Country Girl” is a track composed of three sections, named “Whiskey Boot Hill,” “Down Down Down,” and “Country Girl (I Think You’re Pretty). The first section has clear influences of psychedelia and even orchestral music, with dramatic crescendos and beautiful cooperation between the group’s members. “Down Down Down” is a rejected Buffalo Springfield piece that was functionally shoehorned into the track. The final section, “Country Girl,” places the band’s harmonization on full display once more, and flourishes of harmonica and insistent drumming make for a satisfying conclusion despite the track’s slump in the middle. “Country Girl” is a microcosm of what CSNY manage to get right and wrong with their productions: quartet-style arrangements and an emphasis on the group’s harmonization yield remarkable results. Single-member forays or tracks with instrumentals pilfered from Middle America are exercises in pointlessness.

The final track, “Everybody I Love You,” is a 2 minute 22 second-long song that does feature the band’s great harmonization work but is unfortunately overshadowed by its tacky, plodding bassline, incessant guitar licks, and the cringe-inducing hook: “Everybody, I love you!”

Far from being awful, though nowhere near impeccable, Crosby, Stills, Nash, and Young produced a record that had a few good tracks. While the record itself isn’t necessarily jaw-dropping, it’s also easier to forgive, as Déjà Vu never took the American public by the same stranglehold as other works equally, or even more so, unimaginative. Some consider the resignation of an album to the category of “background noise” an insult — but this is exactly what Déjà Vu is, and that is not a terrible thing. One can leave the record on in just about any circumstance, carry on with daily activity unperturbed, and occasionally stop to take in a beautiful moment sprinkled here or there. Listen a few times, and you might recognize a verse; call it déjà vu.

« The Ugly Truth Behind Beauty