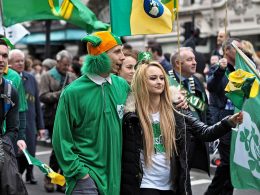 Richard Spencer says he hates St. Patrick’s Day. He seems to view it as a negation of white American identity, which he says is WASP identity. We’ll address that in a bit, but let’s first look at just who WASPs are and whether they are an elite or not.

Among those earning over $100,000 in household income, we see 44% of Jews, 29.5% of WASPs, and 19% of Catholics. Among those earning a household income of $50,000 or more, are 68% of Jews, 61% of WASPs, and 45% of Catholics. WASPs are not an elite. They cluster more toward the upper-middle class. Jews are an elite. They are 15 times more likely to be on the Forbes billionaires list than the average American, and WASPs are probably not more than twice as likely.

The white Catholic figure is different from the overall Catholic figure because Hispanics are 38% of Catholics in the US and earn 71% of what whites do in terms of median income. Probably 23% of white Catholics are in the $100,000 group as compared with 29.5% of WASPs and 50% of them are in the over $50,000 group as compared with 61% of WASPs. Lutherans, who are a proxy for most people having German or Scandinavian ancestry, fall in between white Catholics and WASPs. There is a spectrum of wealth among white Americans, and some of this may be due to WASPs getting to America first, but the difference is not stark. WASPs are slightly more likely to be among the elite, but not by much. Jews being twice as likely to earn $100k+ and a third of American billionaires despite being 2% of the population is a stark difference.

If St. Patrick’s Day is anti-WASP, then it doesn’t mean that much, because WASPs don’t dominate Catholics or Irish-descended people like Jews dominate both groups. While the melting pot hasn’t entirely melded Catholics and Protestants together in terms of privilege, it has brought them close or at least much closer than they were a century ago.

In reality, most white Americans go to a St. Patrick’s Day parade because it is what their friends are doing. It isn’t about rebelling against WASPs. Okay, maybe a few people like to LARP as IRA operatives and listen to Irish rebel music (not that I would know) but they are a rare type.

Spencer has a point about St. Patrick’s Day being confusing, though. It doesn’t scream authenticity. The green beer and green river are gimmicky. The modern Irish-themed Dropkick Murphys and Flogging Molly are better than the average pop band, but that isn’t saying much. The Facebook photos of people wearing green are trite. The green t-shirts with cheeky slogans are okay, but only for the second you read them. The plastic leprechaun hats are party store throwaways. On the surface, it looks like a lot of hullabaloo.

But you have to be there. There’s a certain something in the air. The whole town is different. What used to be one thing is now another. Crowds reconfigure the landscape. The terrain is now partially human. An ordinary set of steps is now a forest of green-clad bodies. What used to be an ordinary street corner has a maze of green around it.

People do dangerous things. Someone nearly dies falling down steps drunk. Someone plummets to their death after falling off a balcony. Extroverts are playing a lottery to see who can win a Darwin Award, a designation given to people who die doing stupid things.

No one is themselves. They’re all going around to different frat houses, apartments, and of course, bars. Everyone talks to strangers more. People visit from faraway places. They’re all on a mission to do. . . I don’t know what, but it’s something. The key is that on that day things are not normal, and that’s a relief for everyone. It frees people up socially.

It is not really about the beer, the inebriation, the green, or even the Irishness per se, although that is a nice theme. It’s the open-air mission, the journey, to transform an ordinary town and otherwise ordinary day into an otherworldly scene. An observer of white behavior, Frank Raymond, said that whites love to dress up and they love the idea of traveling to an otherworldly place. There’s some of that in St. Patrick’s Day. It’s all about the vibes, which can only be felt intuitively and up close.

Where do those vibes come from? White people. While whites are 60% of Americans, they are probably 90% of St. Patrick’s Day celebrators. The few non-whites who celebrate it are often high white admixture Hispanics. Asians and especially blacks stay away.

Maybe the high percentage of white people creates a more natural feeling among strangers, enabling people to talk to each other who normally wouldn’t. It seems everyone is your friend. (Except that guy in that pub who elbowed you and started a shouting match with you. What was that guy’s problem anyway?)

I can understand why WASPs wouldn’t like St. Patrick’s Day — especially Scotch-Irish, given the conflict between their Orangeman cousins and the Catholic Irish in Ireland. However, they, along with whites who LARP as Irish on St. Patrick’s Day, are underdogs — not to WASPs or the British Empire but to multiracial globalization. The difference is that the British Empire never changed the Irish people racially, but globalization threatens to flood white nations with non-whites who will absorb them and change their racial identity forever.

Put it this way: whites at a St. Patrick’s Day celebration will go home, vote Republican, and be your friend at work or school sooner than non-whites who don’t attend. Old feuds are fun to bring up, and a proud descendant of WASPs or Scotch-Irish people need not celebrate St. Patrick’s Day, but it’s important to keep it in context. A St. Patrick’s Day parade is better than Islamic Ramadan and Mexican Cinco de Mayo. Green-clad white normies are better than Puerto Ricans blasting Reggaeton from speeding cars, blacks playing loud rap music at odd hours, and quiet Asian students who aren’t much to talk to.

The sad thing is that St. Patrick’s Day celebrations may one day cease to exist. The people who organize them are white, and whites are rapidly declining due to capitalism discouraging procreation and non-whites being on pace to absorb them into a brown, multiracial mass. One shouldn’t, however, go to St. Patrick’s Day celebrations with the fatalist view that it is worth relishing while it lasts. That would be against the spirit of the holiday. One should go with the spirit of a people who take their own side — to use Michael Polignano’s phrase — and kicks out invaders. This seems to be best embodied in the Irish nationalist song Óró ‘Sé do bheatha ‘bhaile. You can hear the bubbling up of a strength which is sorely needed by whites in the West.

May the white spirit that inspires this day never die.