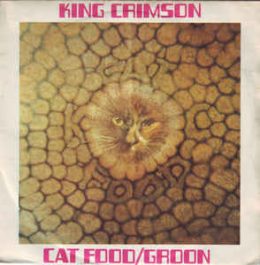 King Crimson’s “Cat Food” was originally released in 1970. It’s a chaotic, piano-centric slice of pop fun that helped cement King Crimson’s image in the eyes of the public as being capable of more than dreary ruminations on dying or losing your mind, as their highly-acclaimed 1969 album In the Court of the Crimson King mostly focused on. “Cat Food” broke King Crimson’s own rules in 1970; it was short, at 2 minutes 47 seconds, and it was released as a standalone single with the track “Groon” on the B-side. “Cat Food” was eventually included on the band’s album The Wake of Poseidon, but in an extended and somewhat altered version from the single release.

Lyrically, “Cat Food” is befitting of King Crimson to the extent that one could even call it the typical King Crimson song. On first listen, it’s almost nonsensical; Lake is babbling about grocery stores, women, poison, and cat food, all while Tippett and Fripp work up a jazzy storm on the piano and Mellotron, respectively. A closer inspection is warranted, however; the tale of a grocery store and its ever-so-slightly deranged patrons smacks of the band’s oft-discussed disillusionment with modernity. The song is critical of supermarket culture, describing various convenience food products like canned “hurry-curry” and “miracle sauce” as being nothing more than glorified cat food sold to people too dumb to know any better. Their breakthrough release was characterized by heavy use of melodies and songwriting techniques that date to antiquity, and “Cat Food” only bucks this trend through its self-aware adaptation of new recording technology and more specific metaphors. Court was an apocalyptic drama; “Cat Food” is just the general feeling of malaise someone relatively self-aware feels while waiting in a checkout line.

It’s also worth noting that “Cat Food” likely exists in the form it does out of simple convenience. It was recorded at a tumultuous time for the band; Ian McDonald, Michael Giles, and Greg Lake all departed the band after their North American tour, shortly after this track was written. Fripp, seeking both to experiment and maintain the band as a creative force after losing much of its membership, took up synthesizers, which would feature in later Crimson output and is readily apparent on “Cat Food.” Fripp was able to bring Lake back for vocals, so the final tapestry is one that fuses most of the century’s influences up until the point of recording into a digestible bit of pop fun.

Despite this, “Cat Food” was not destined for commercial success. It briefly charted in Europe, but nowhere else, despite a reunified-for-the-night band putting on a mildly unsettling mimed performance of the track for Top of the Pops:

The 50th-anniversary release of “Cat Food” that was made public today, March 6th, 2020, contains the original track in impeccable quality, a recording of the track from a live performance in Toronto, and the even more experimental “2019” mix of the track, recovered from initial recording sessions in 1969. The original B-Side, “Groon,” is the final track on the extended play. The alternate mix of “Cat Food” features a hotter cut, forays into noise, and a dash more chaos in Tippett’s piano work. Every version of “Cat Food” makes for excellent, smoky listening — it’s the sort of stuff one might expect in the basement clubs of yesteryear when one didn’t have to put on a public face and deal with some kind of ebonics to enjoy a night out.

Nonetheless, there is a sliver of disappointment that tinges this release. Yes, the 50th anniversary of such a unique piece of music is cause celebre. But are we really not writing anything worthy of the same praise in the current year? I would argue that’s not the case, though a large portion of those on the Right would disagree with me, and I certainly understand where they’re coming from. Part of this disillusionment is due to the machine that brings us pop music these days; it’s far more lucrative to devote the industry’s efforts into making mulatto jams for the broadest audience possible.

For the rest of us, re-releases can be trotted out, year after year, until the horse carcass becomes unrecognizable as a horse.