Squarepusher’s Be Up a Hello 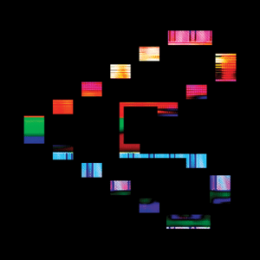 Tom Jenkinson, the Warp Records mainstay better known as Squarepusher, released his 15th studio album on January 30th. It’s called Be Up a Hello, likely a reference to the old days of game controller cheat code combinations, and it marks a return to Jenkinson’s old production methods. The sounds of Be Up a Hello were produced by a combination of the analog synthesizers prominently featured in his early work and modern audio processing techniques that he’s honed over his 27-year-long career, and to great effect; Be Up A Hello is a thoroughly intriguing, sometimes challenging, and simply amusing slice of buzzy breakcore and bombastic beats that would send a house party full of hipsters into spastic fits.

Despite its enjoyability, Hello also shows some signs of age; while Jenkinson has further refined his sound from his last album, his music is beginning to sound somewhat dated in the new decade. This is a double-edged sword: On the one hand, one gets to relish in the feelings of both nostalgia and novelty by hearing new music reminiscent of a bygone, better era. On the other hand, such music can grow stale relatively quickly, being consigned to the history books as an album of little significance owing to its lack of evolution. Hello walks a very tight rope in this regard. It’s impossible for the epileptic electronica crowd not to rejoice — new Squarepusher! — but whether this album remains a Friday night mainstay or is forgotten about in favor of older works remains to be seen.

Squarepusher’s sound is influenced by a variety of different sources. Some are obvious, like the frenetic breakbeats, beeps, and pulses of Aphex Twin — others less recognizable, albeit more fascinating, like the organ music Jenkinson was exposed to at Chelmsford Cathedral as a boy. It’s not strictly dance music, as much of his output plays at a speed the human body simply couldn’t keep up with, but it’s far from arhythmic, either. The music of Squarepusher is therefore very stereotypically white and very stereotypically urban. You’d be hard-pressed to find another circumstance in which about one hundred people in their teens to twenties furiously thrash to what sounds like a malfunctioning dishwasher other than in some basement in a city.

Hello begins with “Oberlove,” a song that could fit perfectly inside the soundtrack to some colorful, retrofuturistic, 2010s arcade game. It’s got a simple, but satisfying bassline consisting of some 808-inspired kicks treated with varying degrees of compression or overdrive. Also present is a melody reliant on glissando synths, glitchy modulation, and airy, reverbed horns that fill every corner of the ears. The percussion is akin to a typical Squarepusher track; it is rhythmic and precise, but overflowing with hyperactivity in the form of violent breaks that vary in length, pitch-shift, and aggressiveness. Instrumentals that sound like MDMA and percussion that sounds like a gunfight have been a winning, albeit unexpected, combination since the mid-90s. “Oberlove” is a good example of the age-old wisdom: “If it ain’t broke, don’t fix it.”

“Hitsonu” follows. It’s more influenced by chiptune, and features a voicebox-like synthesizer squelching and scurrying throughout several octaves atop a sub-bassline and fluttery touches of oscillation. “Hitsonu” is an example of where formulaic production can lead to weak outcomes; the beginning of “Hitsonu” doesn’t sound dramatically different from “Oberlove.” In many ways, it’s simply a brighter, lower-resolution version of “Oberlove.” Fortunately, about one minute and twenty seconds into the track, much of the percussion is dropped and the melodies float aimlessly about for several seconds. When the drums return, it is with a vengeance, furiously tapping out 64ths and 128ths before splitting apart into laser-like conflagrations of the glitchy synthesizer.

“Hitsonu” is a good reference for much of this record. Occasionally, one feels like they’ve heard this song before, and is less enthused. However, unexpected bouts of experimentation or diversion create tension and excitement; they’re the album’s little surprises, which make listening worthwhile.

“Nervelevers” is the album’s third track, and it’s appropriately named. Square stabs of synthesizer and an ominous bassline prod in unison with an incessant, merciless breakbeat. The sprinklings of glitch present in this track are made out of the trail-ends of each synth note, creating the impression that the relatively simple — albeit energetic — facade of the song is crumbling in the listener’s ears in real-time. Halfway through, a syncopated drum breakdown interrupts the proceedings for a wash of oscillator anarchy and a reprieve from percussion. “Nervelevers” ends much like it started, albeit with even greater portions of discord and noise.

“Nervelevers” was also the album’s second single, which was certainly a wise choice; it’s got exuberant, danceable energy, making it an accessible bit of rave material, but its atonal elements and aggressive spine give it enough experimental oomph to keep it from being mainstream.

“Speedcrank” is also aptly named — the two words are both slang for amphetamine — as its introduction is composed of impossibly quick tin-can rattling and snarling licks of rubbery, tenor synth. “Speedcrank” bounces between various rhythms with ease; its instrumental has a particularly gristly, gnarly sound reminiscent of the drum-n-bass works of other artists like Venetian Snares. There is also an element of jazz incorporated into the seemingly unpredictable undulations of the track’s saw-wave melody. Towards the end of the song, diversions into ambient, noise, and trap music add addicting variety.

“Detroit People Mover” begins with significantly less fanfare than everything preceding it. Chiptune waves treated with wah-wah, warm pads, and textured strings float gently about, creating an atmosphere not unlike the comedown of a 90s trance track. A lightly overdriven sub-bass kick joins the track midway through, accompanied by new-age slides and uplifting melodies. “People Mover” is a shining example of an easygoing interlude track that doesn’t bore the listener. Rather, it’s a pleasant detour from the brutality of the rest of the album; a reminder from Jenkinson that catharsis and calmness often follow each other.

“Vortrack” slices through the clouds of “People Mover” with a hardstyle kick drum and a hissing hi-hat line. Musically, it maintains the ambient style of the previous track but in a minor key and with dripping reverb. Futuristic rolls of bass occasionally skirt about the top of the track, as do orphaned hits of string. “Vortrack” does drag on a bit. It’s a bit too sinister to be danced to, and it ends in a similar fashion to “Nervelevers.” One of Hello’s biggest weaknesses is that when a gimmick is used more than once, it’s plainly obvious to the listener, and “Vortrack” is no exception. “Vortrack” is one of those songs that would probably be better suited to a different album, with a different focus. On Hello, it simply feels like a hammered misstep.

“Terminal Slam” is an acidic glob of club napalm. It’s got a discernible, though characteristically rapid-fire, 4:4 rhythm, pounding kick drums, repetitive synth sections, and enough energy to burn a dancefloor down. The track’s breakbeat influences are mostly left in the hands of a ratchet-like sound effect and smatterings of snare throughout the track, as well as a well-timed interlude at the song’s halfway mark. Following this, “Terminal Slam” gets a heaping portion of panic-inducing drones and crash cymbals that give way to a heavily distorted, syncopated bassline. Saws are traded for pads towards the end, giving the track a sense of gestalt similar to what one might feel at the end of a particularly enervating rave. “Terminal Slam” contains some of Hello’s most enthralling material, simply because it differs from the rest of the album without sacrificing any of its electricity.

“Mekrev Bass” is the record’s longest track. It begins with a foreboding slice of ambient antics but quickly shifts into high gear with a groovy breakcore beat and staircase-like synthesizer leitmotifs. “Mekrev” does, however, sound a lot like other tracks on the record. Hello may be a victim of its format; as an album consisting of separate “songs,” each considered independent entities, similar material can bore a listener expecting significant diversion. However, if Hello were to be played as a continuous set in some dingy nightclub, it’s unlikely that anyone would even notice such a degree of similarity. In fact, such touchstones would probably be welcome familiarities to help listeners digest otherwise difficult music. “Mekrev” ends on a more original note, with the ratchet sound explored in “Slam” being given a sharper edge and placed atop four-on-the-floor kick drums before culminating in a drop into silence.

“80 Ondula,” the final meditation, has no beats. Instead, it’s a metallic ambient track built around a stretched chord and distant sirens. A pulsating, two-note bassline joins later on, as does a menacing and seemingly random synthesizer. “80 Ondula” is functionally the evil twin of “Detroit People Mover.” It is the musical hangover that comes after the exhausting exertions of Squarepusher’s genre — a reminder that what comes up must also come back down. One could even see it as Jenkinson acknowledging both his own age and the age of his music; and perhaps letting his fans know that one day, they will grow old and tired, too.

Be Up a Hello comes at a time when popular music is increasingly pandering towards non-whites. Over half the tracks in the Billboard Hot 100‘s top 40 are by blacks or Hispanics, and virtually all of them are either hip-hop tracks or hip-hop adjacent. The typically non-white stars of the top 40 also frequently posture as if they’re representatives of the counter-culture, despite being massively successful. Latin pop music, black exclamations of racial pride, and other cultural poisons dominate the airwaves to great fanfare.

Meanwhile, the frenetic, Faustian music that the few remaining urban white folk enjoy remains consistently in the underground — another example of who the true underdog is in this fight.