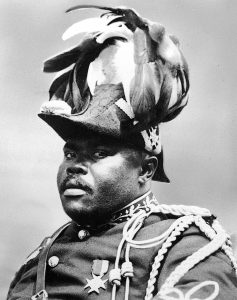 In 1923, when Marcus Garvey, the first significant black separatist leader of the 20th century, invoked the parable of the Good Samaritan (Luke 10: 30-37), he didn’t mean to say that he had been rescued by an altruistic stranger. No, he had just been convicted on federal charges of mail fraud in soliciting investments in his ambitious Black Star shipping line and was facing heavy penalties.

Garvey was using the language of the New Testament to skewer those he held most responsible for his conviction. As he put it more explicitly:

[The] peculiar and outstanding feature of the whole case is that I am being punished for the crime of the Jew Silverstone. . . I was prosecuted in this by Maxwell Mattuck, another Jew, and I am to be sentenced by Judge Julius Mack, the eminent Jewish jurist. — Negro Times, June 20, 1923

Last month, this column examined the primacy of Jews in organizing, leading and financing the 20th-century black “civil rights” movement from the 1900s to the late 1960s, by which time its legislative goals had been achieved. During the past 30 years, however, a noisy public contention between blacks and Jews has seemed to be the rule. Was the combination Garvey saw behind his fall in 1923 an exception to the tenuous black-Jewish collaboration of the earlier era? Or was it evidence of a deeper pattern, one more difficult to discern but which better explains Jewish policy in the past century’s involvement in black affairs?

The fact is that from at least 1920 to the present day the overwhelming brunt of Jewish influence has been thrown against men and movements that championed or augured black separatism, under whatever name: pan-Africanism, the Nation of Islam, black nationalism and black power.

First to fall was Marcus Garvey, the most popular black leader of his day. His United Negro Improvement Association massively promoted pan-Africanism and separate Negro development. Contrary to a popular impression, Garvey didn’t espouse imminent black return to Africa, though his organizations and enterprises pointed that way. Surprisingly, Garvey was not averse to cooperating with the white separatists of the Ku Klux Klan. His most tenacious opponents were the integrationist organizations, above all the Jewish-led National Association for the Advancement of Colored People, which Garvey called a “white” organization.

Following WWI, U.S. government authorities, including a misguided young J. Edgar Hoover, subjected Garvey’s business dealings to the kind of scrutiny that today, as in the past, meant ruin for the targets. Indicted for mail fraud, Garvey attempted to have the Jewish Judge Mack disqualified when it emerged before his trial that the jurist was a contributor to the NAACP. The judge refused to recuse himself and ended up sentencing Garvey to several years in prison and imposing heavy fines. On his release from the federal penitentiary in Atlanta, Garvey was deported to Jamaica. His movement never recovered.

After the fall of Garvey and the temporary eclipse of black separatism, American Jews active in “civil rights” devoted their attentions to rooting out any nationalist and separatist tendencies among blacks who directly or indirectly were serving the Jewish cause. NAACP president Joel Spingarn was so fanatical an integrationist that in the 1930s he tried to forbid NAACP meetings at all-black schools or churches.

Meanwhile, as black writer Harold Cruse informs us in his 1967 blast at Jewish domination of black movements, The Crisis of the Negro Intellectual, Jews in the American Communist movement suppressed the least tendency towards black nationalism among their Negro “comrades.” Indeed, when blacks and Jews clashed, the language of the Jewish “proles” foreshadowed the latter-day jeremiads of Norman Podhoretz and Irving Kristo!. (After a few Jewish shops were damaged in a riot in Harlem in 1935, Communist writer and editor Mike Gold pronounced the event a “pogrom.”)

The emergence of the next substantial separatist group, the Nation of Islam, provoked similar Jewish hostility. The organization was taxed with “racism” against whites, of course, but usually in the context that influential Jewish newsman Mike Wallace resorted to in his 1959 television special, The Hate That Hate Produced, which warned if whites didn’t speed up integrating with blacks, Armageddon would be at hand. As had Garvey before them, black Muslim leader Elijah Muhammad and his lieutenant Malcolm X met with white separatists, including George L. Rockwell and the Ku Klux Klan.

Needless to say, the Nation of Islam and its various offshoots continue to be snooped on and smeared by the Anti-Defamation League. (The “militant” aspect of the black Muslims was not what alienated Jews, as can be inferred from the reaction of influential Jews to the Black Panthers. Read Tom Wolfe’s brilliant Radical Chic. Jews were quite willing to contribute as long as the Panthers limited their other activities to blasting white “pigs.” The Jewish mood, however, switched to revulsion and rejection when it turned out the Panthers claimed sympathy for the Palestinians.)

Black separatism looms as large in black-Jewish strife as any other factor. The purge of white officials from SNCC and other black groups; the demand for black-run public school districts in Brooklyn; the call for all-black dorms in many colleges: these and many other spats between the two minorities are, if anything, evidence of a Jewish desire to amalgamate black and white that far outstrips the integrationist dreams of Negroes.

To be sure, Jews advance their own group aims and demand satisfaction for their own group grievances (one place in law or medical school lost, one rabbinical student stabbed). No doubt the jabs and jibes over Judaism as a “gutter religion” or the asseverations of solidarity with the PLO from this or that black spokesman or agitator has helped keep the pot boiling. But the thread of continuity seems evident: The aim of Jewish striving vis-a-vis the blacks has been to inflict them on the whites or, to put it more bluntly, on the white Gentiles, for Jews seem, surprisingly or not, to figure decreasingly in the various indices for integration with blacks since the 1960s.

One cannot help but be astonished by the doughty seriousness of purpose with which Jews, individually and as a group, have promoted the integration and amalgamation of blacks with what remains of America’s dispossessed majority. A century’s work of organizing, leading, financing, and — where necessary — policing the blacks; a century’s work of proselytizing, misleading, dividing, soothing, outsmarting, crushing — whatever has been necessary — the whites. The contrast between Jewish policy on integration in America and in Israel/Palestine couldn’t be greater.

This article originally appeared in Volume 23, Issue 1 of Instauration, December 1997.