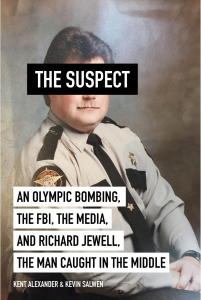 Kent Alexander & Kevin Salwen
The Suspect: An Olympic Bombing, the FBI, the Media, and Richard Jewell, the Man Caught in the Middle

Richard Jewell was an obese Georgia homeboy who wanted to be a hero and serve in law enforcement. He got his wish: His short life was crowded with heroism.

In 1984, when he worked for the US Government’s Small Business Association in a department responsible for handling natural disasters, he drove a supply truck through high water to a flood-ravaged zone in eastern Kentucky, helping 1,000 people.

As a sheriff’s deputy in North Georgia, he outsmarted a known drug dealer by feeding the dealer’s pitbull puppies every day. The dogs grew to such a size from overeating that when he and his fellow cops inevitably had to arrest the dealer, they posed no danger.

He also rescued several accident victims while carrying out his ordinary duties.

However, none of his heroism compared to what he did on the night of July 27, 1996, when he discovered a bomb in Atlanta’s Olympic Centennial Park, a community square for the 1996 Summer Games, and moved as many people away from it as possible prior to the blast.

As the ancient Greeks could have told you, heroism comes with a cost. Richard Jewell was accused by the FBI of planting the bomb himself. The FBI developed a criminal profile to match the characteristics of Jewell, leaked their suspicions to an adventuring virago reporter at the Atlanta Journal-Constitution, or AJC, made Jewell’s life hell for about 3 months, and then thoroughly bungled the investigation.

Alexander and Salwen’s The Suspect is what the 2019 Clint Eastwood movie, Richard Jewell, is based on. The book contains more info, as usual. Richard Jewell’s story is important: The events of the 1990s, including the Jewell case, left an enormous impact on the development of the New Right as it exists today. The entire Richard Jewell story lays bare the problems and contradictions within Georgia, the Union’s most politically and racially unstable state. It also exposes the logic of the 1964 Civil Rights Act and the costs on society of implementing “civil rights.”

“Civil Rights” Built “The City Too Busy to Hate”

The bombing and framing of Richard Jewell came out of the interplay of social forces resident in Atlanta and the FBI’s dealings in the city, which included institutional guilt for bugging the Reverend Doctor Martin Luther King Jr. and successfully using criminal profiling techniques to find Wayne Williams, the Atlanta child murderer. Unlike many other American cities, Atlanta had a less traumatic experience with “civil rights” rioting in the late 1960s. The city’s political elite came to believe that Atlanta’s economic performance caused the “civil rights” riots to simply pass them over, and they developed the moniker that Atlanta was “the city too busy to hate.”

However, having a moniker with “hate” in it means there is plenty of hate to go around. Atlanta, and the rest of Georgia, is not socially stable along racial lines. The moniker also implies that one must be ever “busy” to avoid being overwhelmed by “hate.” Mayor Andrew Young made a bid for Atlanta to host the Olympic Games in 1990. Mayor Young claimed that he lived within 50 yards of the local Nazi Party headquarters as a child, [1] [2] and was thus motivated for anti-racist reasons to host the games. Competition was stiff as Athens, Greece was also making a bid.

The book inadvertently highlights the unseen logic of the 1964 Civil Rights Act. Christopher Caldwell has called it “a second constitution,” meaning that just as the US Constitution allows for 30 round magazines although the Founders only knew of flintlock rifles, the things implied by the Civil Rights Act but not explicitly specified have a legal force all their own. This is different from other laws, where lawyers and judges find all sorts of loopholes or the various bodies of law that aren’t enforced at all.

In the case of Richard Jewell, the implications of the Civil Rights Act fall into two categories: The first is the criminalization of voluntary civic virtue in things like security or neighborhood watches by whites. When working-class whites are free to act to defend their community, the problems of crime are easily controllable, but “civil rights” is a system that cannot tolerate this. Ordinary citizens suppressing crime means ordinary whites can suppress blacks and other non-whites.

The second implication of the Civil Rights Act is that all whites, especially working-class white men, must be the threat. It’s the same principle at work in NATO — “the Russians” must be the threat no matter what the circumstances.

In the early 1960s, the FBI became the enforcement arm of the “civil rights” movement as well as the corresponding Civil Rights Act. As a result, the entire institution was arranged to see Southern, white, working-class men as the enemy, no matter what the circumstances.

Indeed, “civil rights” and affirmative action policies helped the real bomber carry out his attack. He called in a warning to Atlanta’s 911 from a payphone. However, Atlanta’s 911 center was not staffed with the sharpest folks. One can see from the transcript below that black dysfunction was a factor in the attack’s success:

The Costs of “Civil Rights”

“Civil rights” has two consistent problems. The first is that believers in “civil rights” always misread data. The second is that white institutions integrated with blacks always break in some way. Each break is different but can be directly attributed to integration.

In the first part, it is clear that the FBI, an institution that enforces “civil rights,” misread data in the Centennial Bombing Case. The FBI didn’t seriously consider how Jewell could have been on duty and dialed in a bomb threat from a payphone at the same time. They didn’t consider the logistics of getting a bomb in a backpack to Centennial Park. There are many other missed clues: The FBI itself encouraged Olympic security guards to be on the lookout for bombs, and there were a number of genuine terror events in 1996, both domestic and Islamic. [3] [4]

The lead investigator leaked the FBI’s suspicions regarding Jewell, and the FBI’s Public Affairs Officer (PAO) didn’t provide any wisdom or words of caution regarding the media to his team. When the editor of the Atlanta Journal-Constitution called the PAO to verify the leak, he confirmed it despite the paucity of actual evidence. Additionally, the press was strikingly credulous. Nobody at the AJC thought to independently back-engineer the actions of the bomber, or question the veracity of the profile. The book shows how the media, especially the AJC, shaped the bombing’s narrative in depth. Even after Jewell’s name was cleared, FBI agents that still thought Jewell was the bomber remained.

The actual bomber, a man named Eric Rudolph, is an example of things that break when Africans are integrated into a white institution. Rudolph grew up in desegregated schools and thus got a redpilling in his childhood. When he went into the Army he was assigned to the elite 101st Airborne Division, where he earned the Air Assault Badge. Rudolph was further redpilled as a soldier. For all the slick marketing campaigns the Pentagon puts out regarding race relations, the US military remains an institution with plenty of racial tension and problems. Blacks, in particular, commit a great many crimes. Black leadership is often poor and tyrannical, and this is especially damaging in the line units in which Rudolph was assigned.

Tired of the ghettoized military, Rudolph deliberately smoked marijuana to get kicked out of the service and started his life as a revolutionary. Rudolph was familiar with the pro-white Christian Identity Movement, but chose to wage his terror campaign as a militant pro-life anti-abortionist. While abortion itself is not necessarily anti-white, there is a logic to Rudolph’s choice of targets. The pro-life movement is misdirected white identity politics. Additionally, the advances of sexual deviance more generally, of which abortion is just a part, is an outgrowth of the Civil Rights Act’s implied legalisms.

Had Rudolph served in a segregated military, he would have been a great Special Forces Operator and quite useful after 2001. There would have been no bombing, and Richard Jewell would have gone on to have an ordinary career in law enforcement. In the end, the 1996 Centennial Park Bombing should serve as a terrible warning.

The city “too busy to hate” is in fact filled with hate and busy with dysfunction. The FBI’s focus on “civil rights” puts a terrible burden on the outlook of its agents, and takes away from institutional clarity more generally.

And most importantly, as Richard Jewell’s virtues were used against him by the pro-“civil rights” establishment, so too are white America’s virtues used against all of us.

[1] [5] I am unable to confirm that there was a Nazi Party headquarters in New Orleans between 1932 and 1941 and that it was “50 Yards” from Mayor Young’s childhood home. I suspect the story is a false memory.
[2] [6] Alexander, Kent and Salwen, Kevin. The Suspect: An Olympic Bombing, the FBI, the Media, and Richard Jewell, the Man Caught in the Middle. Harry N. Abrams, 2019. Kindle edition. Loc. 1729
[3] [7] There was a great deal of white frustration in 1996. NAFTA’s negative impacts were clearly felt by 1996 while at the same time, ominously, the FDA approved OxyContin.