If You Build It, They Will Come: On the Importance of Political Infrastructure 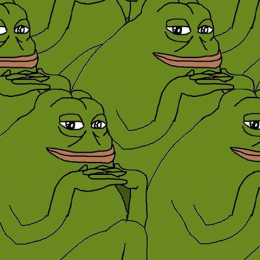 Well, I was as euphoric as anyone when the famed takeover of UCLA sent shockwaves through the internet, but this past month has seen me dragged kicking and screaming to dreary, depressing reality. Witness here, the state of the world:

50.6K likes, 10.7K retweets as of February 12th. Nothing but butt-kissing MAGApedes and frothing-at-the-mouth Leftoids in the responses, with the exception of a single voice in the wilderness doubting whether Chuckie Boy is really America First.

Did the naysayers not warn me and other groypers that they’d achieved nothing, that the donor class is still with Charlie Kirk, that Donald Trump was still with Charlie Kirk, that TPUSA was fundraising with (heavily edited) clips of themselves apparently BTFO’ing the groypers. Didn’t Nick Fuentes flush his credibility down the toilet with his laughably bad take on the Soleimani assassination? Could the groypers have actually lost by winning, as I described in my article linked above?

I made a mental note of writing up a retrospective on the Groyper War at some point in the future. Truth be told, my instinct was to start writing immediately, but I decided to at least wait and see the outcome of the America First Political Action Conference organized by Fuentes and others in order to build on what was accomplished in the Groyper War. Wait and see is a good heuristic for these things.

But then I saw Fenek Solère’s excellent reportage on the position of Matteo Salvini in Italy. Of note is the mention of the The Brothers of Italy, led by Giorgia Meloni, as potential allies for Salvini who could guide him to a more sophisticated nationalist position. What is very interesting to me as an outside observer of Italian politics is that there is very little mention of Lega (or Lega Nord as it was known back in the day), but that national populism in Italy is all Salvini all the time. One wonders if there is a party infrastructure in place behind the man.

Indeed, in the comments, I drew an analogy to the bus factor, a measure ostensibly of risk (but actually of fragility) initially employed in software development which calculates how many people have to be hit by a bus before a project is stalled out or completely ruined. Modern corporate projects usually have ridiculously low bus factors due to their focus on efficiency. Efficiency is the elimination of redundancies, which means that usually no more than one person knows how to perform a specific step in the process. Most corporations are one second of inattention away from pandemonium.

If Italian populism is Salvini and nothing but Salvini, then the elite is one assassination, character assassination or kangaroo trial away from victory. Indeed, option 3 is in full swing as the Italian Senate has stripped Salvini of his immunity, opening him up to prosecution on trumped-up charges of kidnapping for “illegally detaining migrants at sea” during his tenure as Minister for Internal Affairs of Italy. There’s a big ole bus barreling towards Don Matteo and organized Italian populism currently has a bus factor of one. That’s bad.

But even if Salvini were to get hit by a bus, Lega would go on. Lega will probably not be as great a force without Salvini and from what I can tell, the party’s secessionist wing is currently holding its peace only due to Salvini’s charisma and the direness of the situation. Without Don Matteo, I expect Lega to retreat to the north — to their beloved Padania, as they’re fond of calling it — and function as a strong regional party, thumbing its nose at Rome.

Let’s turn our attention to America. Much like in Italy, American national populism is very much Donald Trump, and precious little outside of Donald Trump. Unlike in Italy, there’s not even a Lega to fall back on — only the GOP (hawk ptooey). No reliable second-in-command, no institutions backing the national populist agenda, just the man himself, embattled and unable to push through even the smallest of agenda items, a prisoner in the White House, reduced to #winning on buttsex in Botswana and dishwasher deregulation. But as long as he’s in the Oval Office, there is a vector and an avatar for the national populist movement in Washington, shining a beacon of light in the beady eyes of globohomo.

If Trump were hit by a bus, it’d be the end of the organized National Populist movement in America and in all probability, a start of an age of genuine darkness on the North American continent. Like Salvini, he’s been put through the wringer of impeachment and a Senate trial on trumped-up charges, acquitted on partisan lines by the Republican-controlled Senate (I shudder to think what he gave to Mitch McConnel in exchange). His victory in 2020 is not a foregone conclusion, as the demographic situation strongly favors the Democrats. And even with all that being said, he’s a 74-year-old overweight man under unthinkable amounts of stress. So, who steps up after Trump? Who steps up after Salvini?

In my comment on Fenek’s article, I complained that Trump isn’t building any infrastructure that will sustain him and his government. He’s not even taking the most rudimentary of action to stop his supporters, disorganized that they are, from getting banned on social media. Later in the day, it came to me that Trump is, in all probability, too busy with the actual business of government in order to build institutions. This task is usually left to political allies of the President. The ideal man for such activities in the USA would have been Roger Stone, but we know what became of him, and all Trump can do is tweet about it. The guy with the actual infrastructure is Charlie Kirk — so Trump retweets, endorses, and sends Donald Jr. to shore up Charlie Kirk. This support of Charlie Kirk, who serves masters with an agenda inimical to national populism feels like betrayal to nationalists and genuine populists.

And here we come to the groypers and Nick Fuentes and the America First Political Action Conference.

Nick Fuentes, of course, soiled his pants something fierce in the aftermath of the Soleimani assassination, criticizing people who opposed the proposition to bomb Iranian cultural sites in a Telegram rant. Having listened to Fuentes for a longer time than most, I can confirm that it is entirely on-brand for him to do so. Indeed, I do not necessarily disagree with him that destroying the cultural sites of an enemy nation is a bad thing in wartime. I was going to write a piece for Counter-Currents in his defense, but I was talked out of it by a friend who suggested that Fuentes would be better served by learning to live with the consequences of his words.

All that being said, AFPAC is the right thing to do. It is the kind of organization that serves as an incubator for cadre. For too long, our side has been neglecting the importance of cultivating political personnel. The Z Man of the Z blog in particular has paid attention to the reasons why the Buckley right and later Conservative Inc. have failed to develop cadre — they relied on the (correct) assumption that a majority of Americans already quietly support them and all they need to do is rally them for political clout.

Indeed that was the case, but the majority of Americans found themselves unable to think, strategize or create a framework for developing and promoting ideas — this required the cultivation of political cadre which the right simply did not do, preferring instead to drum out conservative intellectuals like Pat Buchanan and Sam Francis who dared question the orthodoxy.

This means that there is no talent pool from which a Rightist, national populist President, or even senator, congressman, or governor can draw staff; and so he is forced to rely on swamp creatures. Furthermore, if there’s nobody to act as staffers for National Populist politicians, there’s no apprenticeship and no next generation of National Populist politicians, which means dangerously low bus factors.

This is not helped by the neurotype that is likely to become a National Populist politician, which seems to include some measure of egomania. At this late stage, I wonder if Donald Trump endorsed Carter Strange in the 2017 Alabama GOP primaries for the US senate out of a fear that a victorious Roy Moore would present a serious challenge from the Right. Judge Moore’s nationalist credentials are definitely stronger, especially in light of the Trump administration’s lackluster successes. The comparable dynamic would be that between FDR and Huey Long — who I believe was the only man who could realistically challenge the FDR machine. A pity for America and pure serendipity for FDR that Long was assassinated.

Insofar as this problem can be solved, infrastructure for organizing, directing, and above all cultivating political talent must be developed. It cannot follow the patterns of the conservative movement, as they’re all wrong and they’re built to appeal to and amplify the normie conservative neurotype (vastly different from Dissident Rightists). If old hands like Michelle Malkin are willing to help, then by all means, they’re welcome, insofar as they realize that their time has come and gone and they are now merely greybeards guiding, but not directing, the young guns. And Nick Fuentes seems poised to build something of worth.

Tellingly, his conference has a higher bus factor than you’d expect. If Nick Fuentes were hit by a bus, or liquidated by the deep state, or mauled by a catboy, the AFPAC would just keep trucking along under the guidance of Patrick Casey and other groyper generals. It’s supposed to be a meeting of the minds for groypers, but also a strategy session, a networking opportunity, and a way of sharing know-how in political organization. Recall that during the Groyper Wars, the entire leadership of TPUSA’s University of Kansas chapter defected to the groypers. Kansas was the biggest TPUSA chapter and the leadership had built it from scratch — that’s skill that’s now transferable to the groypers.

If National Populist politicians want to not only survive, but also push through their agenda, they will need cadre to do it. In the absence of National Populists and dissidents to staff their administrations and generate ideas for them, they will default to cuckservatives, libertarians, and other slave-morality Rightists in order to do so. This will make their already precarious positions weaker. Next time we complain about Trump having forgotten his base, it’s important to understand that he needs a National Populist political infrastructure in order to govern effectively. No such thing exists right now in the US. But if you build it, they will come.