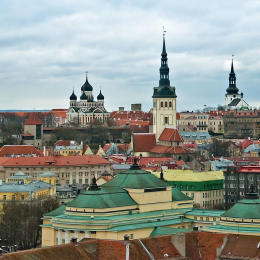 When I think about Estonia, I think about Kalevipoeg, Estonia’s national epic by Friedrich Reinhold Kreutzwald. To me, this poem best represents the Estonian people, whose history, language, and mythology are distinct compared to the rest of Europe. The Estonian Declaration of Independence, created on February 24th, 1918, even quotes an excerpt from the last chapter of Kalevipoeg. As I was attending the fourth annual Etnofutur conference and independence march, I kept thinking about how the main character and themes of this epic poem have influenced Estonian nationalists and Estonian identity.

Sinine Äratus (Blue Awakening) is the nationalist youth group of Eesti Konservatiivne Rahvaerakond (EKRE), the conservative and national populist party of Estonia. Since 2014, Sinine Äratus has organized a torchlight march every February 24th in Tallinn to celebrate their Independence Day while also paying tribute to all those who lost their lives fighting for independence.

Since 2017, Sinine Äratus has also held the annual Etnofutur, a conference dedicated to Estonian and European nationalists. I first attended the conference and independence rally last year and had a great time meeting fellow nationalists from Estonia and throughout Europe. This year, I was able to see many of the people I met last year, including nationalists from Estonia, Finland, Latvia, Lithuania, Germany, Hungary, and Belgium. This year’s conference included seven speakers, some of which returned for their second or third appearance at Etnofutur.

Ruuben Kaalep was the first speaker. Winning his election into parliament last year, his speech gave a quick review of his eventful first year in parliament. Kaalep was proud that his party, and his campaign in particular, was the first in Estonian history to use “memetic warfare” in an overt manner during an election. Naturally, this made him a target, as both local and international media tried to use lies and smear tactics against him. Kaalep emphasized that his best strategy against these attacks was to never apologize, never back down, and to laugh it off. When he was accused of anti-white slurs for giving the “OK” sign in parliament, he refused to apologize and had his fellow EKRE members also give the same gesture. Along with his personal electoral success, his party came in third place and currently holds 19 out of 101 seats in parliament.

The next speaker was Toni Jalonen, the Vice-chairman of Finns Party Youth, the youth group of the True Finns Party, the Conservative party of Finland. Jalonen introduced himself and described his red-pill journey from a liberal artist to a nationalist. His awakening occurred, like many others, during the 2015 migrant crisis, which saw over 30,000 immigrants entering Finland and changing Finnish culture, society, and demographics practically overnight. His speech focused on his notorious posts on Twitter, where in so many words, he stated that Finland should be for the Finnish people. Still, these posts created a media outrage and national controversy. Facing social pressure, he quickly apologized. However, he decided to retract his apology and double down on his tweets and his opinions, which he still expresses today on various social media platforms. Through clever humor and sincere honesty, Jalonen’s speech drew lots of laughs and insights on how to stand up for what we think and what we want.

Fróði Midjord was the third speaker. His speech contrasted Estonia’s racially homogenous society to the demographic displacement of white people throughout Western Europe and its settlements. He explained that liberalism requires us to naively consider everyone both a blank slate and also an interchangeable part in a globalist machine. Midjord countered that view by explaining Heidegger’s concept of “geworfenheit,” where we should accept and stick up for the ethnic and racial identities we were born and thrown into.  He also noted that since we cannot turn back the time on demographics, we need to have our own organizations like the ADL that fight for our own ethnic and racial interests as white Europeans.

After a nice lunch break of food and socializing, the next speaker was Martin Helme, EKRE’s Minister of Finance. Having been involved with EKRE since 2015 and being appointed to his new position last year, Helme gave a sobering and pragmatic talk on the challenges that nationalist politics have against liberalism and globalism within a parliamentary framework. He noted that while nationalism has always been the result of failed empires throughout history, the path towards nationalism is often unclear and murky. Moreover, he explained that many people and lands end up being stuck on the wrong side of “agreed-upon” borders. He gave pragmatic advice from his experience, recommending our people to never lie, stand up for what we truly believe in and to try to build organizations to help politicians and activists sympathetic to our nationalist causes.

Tomas Skorupskis gave the next speech. Skorupskis is a veteran of the Etnofutur conferences, having started the Kryptis youth movement in his native Lithuania. He talked about his experiences entering nationalist politics years ago at a time where Lithuanian heritage symbols and even the word “nationalism” were still considered taboo. Skorupskis also shared his experience campaigning for a previous nationalist party. Despite all his hard work and effort for the party, the first election only drew one percent of the vote, whereas the next election drew three percent. Nevertheless, he learned a lot and explained that looking back, the small increase in votes was still a substantial improvement. Skorupskis then talked about ways that each person in our community can get involved, from content creation, activism, and financial support. Finally, he reminded us of the cycle where people influence culture, culture influences politics, and politics impact people.

Gemma Kits is a young Estonian woman who gave a talk on the mysticism of Estonian music and national identity. She started her speech by introducing herself and her journey towards being a nationalist and joining Sinine Äratus. She eventually was given a mouth harp as a gift from one of her friends from the youth group. She gave a background history of the instrument and the role it has played in both Estonian music and her connection to her ethnic identity. Kits also described how many young Estonian nationalists from the youth group also share many similar artistic and creative talents.

The last speaker was Laszlo Toroczkai. He is the mayor of Asotthalom, Hungary, a small city near the Serbian border. Near the beginning of the 2015 migrant crisis, when thousands of migrants were being led into Europe by NGO groups, Toroczkai decided to use his power as mayor to organize a small armed squad of Hungarian authorities to protect the border. He quickly started to get media attention as he made a five-minute video telling migrants to avoid his city, and if possible, all of Hungary. Naturally, the video went viral and the media used many anti-white slurs against him. He also suggested that Fidesz, Hungary’s center-right party, create a fortified border with razor wire. Fidesz took Toroczkai’s advice and implemented the razor wire, an idea that turned out to be very effective and popular. After cheers from the crowd, Toroczkai’s speech focused on the concept that there has been too much talk and complaining these last few years. Simply put, he explained that now is the time to act. He kept this advice broad, but said that each person needs to get out of their comfort zone to do their part. Finally, he described how he created a new Hungarian political party, Mi Hazank Mozgalom (Our Homeland Movement) and will continue to stick up for his people, his land, and his borders.

The main character of Estonia’s national epic is simply named Kalevipoeg (Kalev’s son). He is a large giant that constantly throws stones to attack his enemies. He travels the earth for adventure and revenge, but eventually returns to Estonia to protect his land and his people. Through a mix of successes and failures, adventures and heartbreaks, Kalevipoeg tragically dies. Yet he is brought back to life with his fist connected to the rocks at the gates of hell, waiting for the day he is needed to rise and protect Estonia.

During the conference, all of the Estonian and European nationalists reminded me of the great Kalevipoeg. When we engage in memetic warfare online, we combat our enemies and their propaganda by revealing the basic human truths that question their legitimacy. Like the brave giant, these nationalists also travel the world to spread their message of ethnic nationalism and racial solidarity. Yet when the time comes to stand up for their homelands, I have personally seen many of these nationalists and speakers risk their privacy, livelihood, and safety to stand up for what they believe in. And just as the reincarnated giant waits at the gates of hell to rise, so too are all these Estonian and European nationalists ready to rise and march through the streets. It is my great honor to have marched with them two years in a row and I plan to continue marching with them for years to come. I hope to see you marching with us next year. For our people. For Europe. For Estonia. Eesti eest!

» What Will Liberals Do When Trump is Re-Elected?