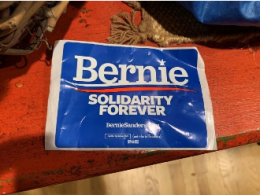 The ideal 2020 election scenario is for Bernie Sanders to lose the Democratic primary race, and for it to be black people’s fault.

Say it comes down to Bernie versus the establishment’s chosen Not Bernie™ candidate. Blacks rally around Not Bernie™ — just to be unpleasant — and tilt the nomination in Not Bernie™’s favor. This causes all the Bernie Bros to blackpill on forming a multi-racial communist coalition and so they all decide to become racist Nazis instead. That would be ideal!

But if Bernie’s momentum continues, we might very well be looking at a Trump vs. Sanders general election. That would be interesting because we would have a contest between two candidates who are both hated by the establishment.

Doug Huntington wrote an article for Counter-Currents about the Dirtbag Left called I Listened to Chapo Trap House So You Don’t Have To. It’s a good article. However, I would somewhat disagree with his conclusion. He says the DSA/Dirtbag Left scene and the materialist Left is de-facto controlled opposition, evidenced by the fact that the establishment is not trying to silence them. How revolutionary could Chapo possibly be when they have their book on display at Barnes and Noble?

Here’s the thing. For the time being, the DSA scene is useful to the establishment because it draws kids away from white nationalism. For the time being. As long as Democratic Socialism stays a niche, semi-underground, bougie white thing, it is no threat. However, if class-based material Leftism got too big, or if it threatened to go mainstream, or if socialists started racking up too many upset election wins, I could see the establishment moving in to shut down the DSA-types, or at least the ones that couldn’t be bought off.

In fact, this is already happening. In the last few weeks, Twitter banned Nick Mullen, one of the most popular Dirtbag Left personalities. Also banned was Aimee Terese of the What’s Left podcast. Apparently, she was banned for saying that Elizabeth Warren needed to be beaten — as in beaten in the primary. 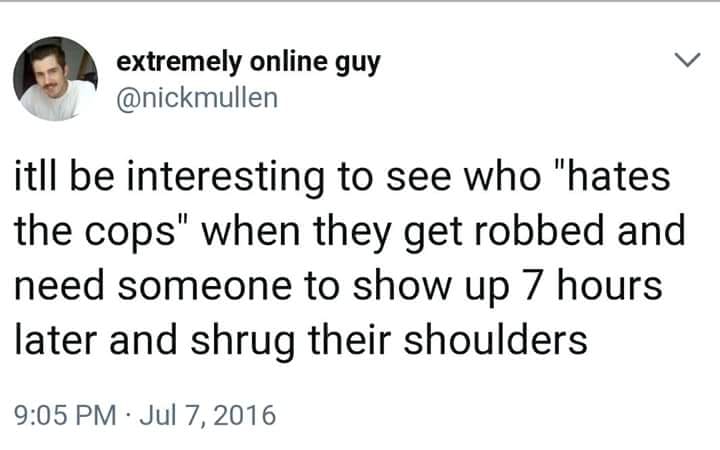 Remember that Alex Jones was useful to the establishment until he got too big. He made people suspicious of state power look silly, and he was a useful meme for our elites. Politicians could respond to legitimate concerns with “What is that? Some kind of Alex Jones conspiracy theory?” and then everyone would laugh. But then Alex Jones got too big. He started beating several MSM outlets in viewership and making everyone look bad. People weren’t laughing anymore, so Alex Jones had to go.

It’s one thing to be annoying on Twitter. But the materialist Left isn’t just becoming a thorn in the establishment’s side culturally. They’re also threatening to split from Democratic politics, period.

A few days after Tim Wise’s previously-mentioned meltdown, he had another hissy fit over an Emerson poll that found that only 53% of Bernie supporters said they would “definitely support” the Democratic nominee should Sanders lose. 16% said “definitely not,” and 31% said it would depend on who the eventual nominee was. Only Yang supporters, a large portion of whom are ironic right-wingers, showed less loyalty to the DNC establishment.

Not sure if these numbers are legit Bc I’ve seen others that bounce around and are different. But if they’re true, this is sickening and purely evil. Anyone who takes this stance is nihilistic not a revolutionary… https://t.co/zJDN5RPXgA

There is some speculation within the Dissident Right as to where the next big wave of converts is going to come from. At this point, all the intelligent Proud Boys, YouTube skeptics, Tommytards, and Jordan Peterson fans have defected or are in the process of defecting to the Dissident Right.

Some people, like Nick Fuentes, believe the focus should remain on the Alt-Lite and normie MAGA types. But there is a faction of the Dissident Right who believe that Bernie Bros should be the next frontier. Richard Spencer — whose new wife is a DSA socialist — recently endorsed Bernie Sanders for president, and TRS’s Fash the Nation has been giving Bernie glowing — no pun intended — coverage lately.

To be honest, I understand why people might think that. These people occasionally say some really interesting things — sometimes ironically, sometimes semi-ironically, and sometimes, in dead seriousness. (Both Menaker and Khachyiyan’s Tweets have since been deleted.)

And some in the Bernie Left have begun to push back against political correctness and visceral anti-whiteness which they see as undermining working-class solidarity:

So, I get it. I get why people wanna go easy on these guys. There is a lot of common ground between the populist Right and the populist Left. We’ve identified a lot of the same problems, and have a lot of the same enemies. Bernie’s supporters tend to be reliably anti-Zionist, and some are even semi-woke on Jews. There’s some high IQ talent in their ranks, and they are big picture thinkers. They use right-wing slang and repurpose right-wing memes. They’ve managed to shake off some of the neoliberal programming, so you would think that shaking off the other half should be a breeze. But I think our people are underestimating just how big that other half is.

You have to wonder if being friendly and hospitable to the Bernie Bros is really the best way to win them over. The Dissident Right won over Proud Boys and Tommytards by exposing how full of shit Gavin McInnes and Tommy Robinson are. We made videos deconstructing Jordan Peterson’s worldview. We won over YouTube skeptics by putting our best minds against theirs. We didn’t just play footsie with them on social media. We went out and started slapping them around.

Here’s the thing. While there may be a lot of overlap between Left and Right populism, the socialists may just as well just say: “Well, if we’re so similar, then why don’t you nationalists come over to our side?”

Likewise, while many in the Bernie crowd have rejected some of the neoliberals’ insane bullshit, they still believe different insane bullshit. They’re still race-deniers, they still believe culture is purely a product of economic and material conditions, and they still believe that problems of biology and nature can be solved through wealth redistribution. Hardcore Bernie Bros believe a lot of unbelievably dumb stuff. And when they are right, it’s often for the wrong reasons. Sure, they tend to be anti-Zionists, but only because they oppose all forms of nationalism; not because they know anything about the Talmud. They may be harder to redpill than normies because their heads are so full of ideological gobbledygook and require more deprogramming.

If you want to win over Bernie Bros, then you have to start deconstructing their narratives. You have to go out and put our ideas next to theirs. Unfortunately, a Dissident Right meme war with the DSA/Dirtbag Left is unlikely. Unlike TPUSA and the YouTube Skeptics, the socialist Left is smart enough not to engage with us. They’re never gonna agree to go on the Killstream for some Internet Bloodsports.

You could publicly respond to Leftist public figures. It will most likely get shared on Leftist message boards. If it hits hard or goes viral, said figurehead might be forced to respond. Perhaps they can be provoked into a meme war. Who knows? But joining hands and saying “we think capitalism sucks too!” is not going to be enough to win over committed ideologues.

You might also wonder if Bernie Bros are not better off where they are. Perhaps it’s to the advantage of whites to do as the Jews do: divide our camp and colonize both parties. Perhaps it’s better to have some whites over in the enemy camp sowing discord among their ranks.

A taste of their own medicine, if you will.