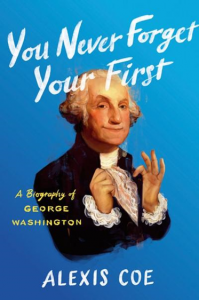 For a lightweight, mildly scurrilous biography of George Washington, this has received an awful lot of advance publicity in recent weeks. You’ve probably seen some of its snarkier bits on news sites [2] and social media: how Washington was guilty of starting the Seven Years’ War (“World War 0,” as Steve Sailer put it), and how he had dentures made from his slaves’ teeth.

Unfortunately these teasers are like comedy-movie trailers where all the good bits are crowded into the preview, while the film itself is mostly a tepid bore.

There is, alas, a shortage of new, spicy scandals here. What we mainly get is old half-truths and legends, the kind of stuff familiar to longtime fans of American Heritage magazine, or even the Jeopardy! game show. One of author Alexis Coe’s shining revelations is that young George didn’t really chop down that cherry tree. No, indeed; fan-fiction biographer Parson Weems made it up out of whole cloth. (Thanks, Alexis.)

And then the business of the “wooden” false teeth, which were not made of wood at all, but rather of bone and ivory and, well—teeth. Just fancy that. The author rehashes this old Ripley’s Believe It Or Not tidbit because she has some race-grievance agenda to push, viz., that the Father of His Country purchased denture materials from his very own negro slaves. (Whom Coe strangely refers to as “enslaved people,” suggesting Washington himself captured them in the wild, perhaps with a butterfly net.)

Tooth-buying was commonplace in the 18th century. Emma Hamilton, Lord Nelson’s future paramour, supposedly was about to sell her chompers one day when she ran into a friend who suggested a more sustainable source of income. As for Washington and his slaves, he seems to have paid them well enough. But Coe wants us to be aghast because in the newspaper ads of the time, the going price for human molars was more than Washington paid his slaves. I hazard to guess that Coe is overlooking some crucial fact, such as that the newspapers were advertising white-people teeth.

Another factoid Coe offers us with a wink and a snicker is that Washington wasn’t a great military leader, because he “lost” more battles than he “won.” Well, up to a point, maybe; this is sort of like saying the Allies in World War Two lost most of their battles 1940-42. Washington won the battle he needed to win, in 1781. The ones he “lost” were mainly skirmishes and routs around New York, early in the Revolution.

Perhaps the most far-fetched half-truth is the claim that young George Washington, age 21, started the French and Indian War (which became the Seven Years’ War in Europe). This was when he led an ambush against some Frenchmen in present-day western Pennsylvania, back in 1754. This point is arguable only in the same way that obscurantist amateur historians will say that the Second World War really began when the Japanese invaded Manchuria in 1931. Washington’s skirmish was not the first border conflict involving British, French, and Indians. The notion that this encounter lit the fuse for the Seven Years’ War may make for a cool story, but to my mind it’s a bridge too far. (Try an internet search for “George Washington” and “Half-King” if you want the particulars.)

Author Coe is described in some reviews [3] as a “Jewish feminist historian.” While I don’t see much feminism in evidence, she certainly strives hard to do a Howard Zinn-style retelling of the George Washington saga. However, most of her material (factual and otherwise) is well worn, and her ideological stance isn’t surprising or novel. Most of the hard facts in her book are lifted from 200-odd-years’ worth of other histories (and derivative sources), while her political spin is little more than hip-Lefty point-and-splutter innuendo. Gratuitously she throws in the old tale about Thomas Jefferson siring mixed-race bastards with the quadroon Sally Hemings—“whom he enslaved,” as Coe suggestively puts it. The claim is unprovable from any angle, yet Coe passes all this off as settled history. And, not to beat the dead horse again, Jefferson certainly did not enslave Sally; she was born a slave like her mother, and Jefferson inherited both from his father-in-law.

This isn’t the first time someone’s written a snarky takedown on George Washington. Back in 1970, one Marvin Kitman wrote something called George Washington’s Expense Account. Ostensibly an exposé of travel-and-expense fiddling, it was really a mocking misrepresentation of Washington and Early Americans in general. That book was lambasted at the time by historians who pointed out that during the Revolution the unsalaried Washington often covered expenses out of pocket. The Continental Congress, never known for its prompt payment, was far in arrears in its debts to the General by War’s end.

Most of the narrative portion of Coe’s book is straightforward but jejune, like a crib-note guide for high-schoolers. But the opening sections are a fun read and have creative graphics. There’s list of Washington’s diseases (malaria; smallpox, carbuncle . . .); his likes and dislikes; and a cute chart of all the types of animals he owned.

Nice trivia point: he began the American mule-breeding industry, starting with a single donkey imported from Spain. (Thomas Jefferson, then in France, had to do some wire-pulling before the Spaniards would permit exportation of donkeys.)

This playful, crib-note aspect is similar to the treatment of history topics in the Politically Incorrect Guides (“PIGs”) of ten or fifteen years ago. They of course were trad-conservative and this is something else again. History Lite, this time with trite, Lefty snark.