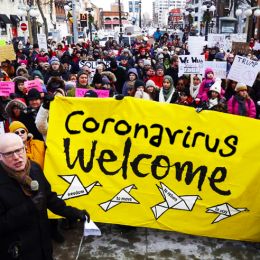 Consider the human immune system — not from an academic or scientific standpoint, but from a very practical and goal-oriented point of view; the goal in question being the continued health of the human. The body seals itself off from the outside world with a strong wall, known as the skin, and only communicates with it through highly specialized ports — the bodily orifices. These ports are often veritable gauntlets of obstacles to any would-be intruders, to make sure that nothing but air passes through the windpipe and nothing but food goes through the esophagus. And in the event that hostile outsiders do break in, the human immune system will dispatch armed killers, known as leukocytes, or white blood cells, to isolate, destroy and completely scrub the invaders. The body will also raise its temperature in order to mobilize the leukocytes and sweat out the invaders (literally boil them alive) — in effect, declaring a state of emergency.

Now, consider that most of what makes a human happens not at the individual level, or at the level of the body, but is the result of processes in the human brain. Not even one brain, but the synergistic processes of many brains which are bound together in a coherent group, and which act together with a similar purpose. Consider that humans do not need to have a dog’s sense of smell in order to orient themselves osmotically when the need calls for it, because we have evolved brains capable of taming dogs and taking advantage of their powerful sense of smell. Much of what we need as beings is externalized to the brain, and often not to our brain, but to the brain-trust which is the group.

In this sense, I do not believe that leukocytes, antibodies, bone marrow, skin, and other organs form the entirety of the human immune system. Rather, the individual’s immune system is merely the last line of defense against pathogens, when all else fails. Before my white blood cells explode a bacterium in dramatic fashion, it has to enter my body. And before it enters my body, it has to find itself in my vicinity — which often means surmounting the walls which divide my house from the outside world, and in a healthy society, the walls which would divide my country from the outside world.

One of the many reasons humans put up walls, lock their doors, train guard dogs, hire armed men, and draw lines in the sand is to protect ourselves from foreign pathogens, especially pathogens our individual immune systems have not developed a resistance to. Societies do not completely wall themselves off from the world but communicate with it through border crossings, and each one is guarded to ensure that all passage is beneficial to society.

The extended human immune system consists of borders, border guards, walls, locked doors, controls, prohibitions, and barriers to entry. Internally, healthy human societies respond to epidemics by first dispatching specialized humans — initially, doctors to treat the ill, later, armed police and soldiers to enforce a quarantine. Societies will impose states of emergency and move to expel pathogens from their midst — regardless of whether it’s an actual pathogen of epidemic proportions, or a social pathogen, such as a criminal gang, a terrorist group, or hostile invaders.

Contrast that to an AIDS patient. This is a person who is immunocompromised, whose immune system cannot defend his body from the onslaught of hostile foreign entities. This person is at the mercy of such petty infections as the common cold. In our corporate society (which maps organizationally onto the human body) this would constitute a society where the methods of removing antisocial elements are not cracking down on gangsters, terrorists, or invaders. We call this state anarchy. Indeed, the immune system might be in fact attacking healthy tissue, as is the case with men suffering from autoimmune diseases. We call this state tyranny. The combination of both is called anarcho-tyranny. This does not happen in nature — the immunocompromised have no immune system to destroy healthy tissue with, even if they had autoimmune diseases before. Anarcho-tyranny is a special kind of evil, unique to the corporate body of a decadent society.

Carrying our metaphor forward, the bodily analog of a society with open borders is a man who has been entirely or partially flayed. Without our skin to guard against the outside world, we are very easy pickings for pathogens and the elements. The center-conservative scoffs at this state and proposes that the flayed man receive skin grafts, but that exclusion of pathogens is unfair insofar as they use the proper ports of entry (mouth, nose, eyes) to enter. “As long as they come here legally. . .” Certainly, raising the alarm of fever and mobilizing the socio-leukocytes is an affront to conservative principles.

It is rather terrible, but our instincts of self-preservation are pathologized. Foreigners often bring foreign pathogens, for which we have no resistance. Therefore, a part of our innate “racism” is the avoidance of these unknown stressors. I recall I crossed paths with an Asian man about two days ago — I could not tell from the distance from which I saw him whether he was Chinese, Japanese, or maybe Korean, although I can usually tell if I get a good look at the man. I didn’t get close enough to see. Knowing is not worth the risk of contracting the new coronavirus.

Now, I’m not a medical professional of any kind, but here’s some sound medical advice anyway. If you want to drastically reduce your chances of contracting this new illness, shut your nation’s ports of entry to travel from China and other afflicted nations. Insofar as there are infected in your country, use the societal repressive apparatus, i. e. the police, to quarantine them until such a time they can no longer spread the disease. And if you find yourself powerless to do that, avoid contact with persons who come from China, which in practical terms means giving all Asians a wide berth, since I doubt people can tell at a distance the difference between the Japanese and the Chinese.

Hopefully, you’ll not be attacked by the societal immune system for practicing these rudimentary acts of self-preservation. Be advised, however, that in many countries of the West, sequestering yourself from Asians in the manner I described is illegal. Until such a time we win this thing and restore sanity, we will have to keep our practical immunology secret.

Hopefully, our nations are not wiped out by pathogens because we were too scared of being called racist.

« The Many Faces of the Jewish Elite: Part 3