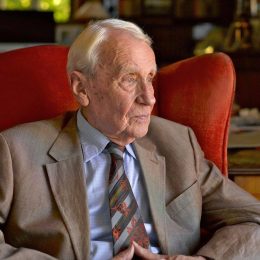 J. R. R. Tolkien’s youngest son, Christopher, died on January 15 at the age of 95. Even in old age, Christopher cut a striking scholarly figure, sitting as he did in a green cardigan before a log fire. His reedy voice, occasionally crackling like the dry wood in the stone hearth at his feet, carrying with it subtle wisps of academic gravitas, as smoky shadows curled like grey-blue snakes around a towering bookcase filled with leather-bound tomes looming like Orthanc over his shoulder. Shelves stacked with studies of ancient texts like the Ancrene Wisse and the Ormulum. The whole scene — a sequence from a documentary entitled J.R.R.T: A Film Portrait of J.R.R. Tolkien (1996) — is somewhat reminiscent of the ominous expository chapter “The Shadow of The Past” from Tolkien’s magnum opus. A prescient image, given Christopher’s filial crusade to preserve the integrity of his father’s work and bring unpublished manuscripts like The Silmarillion (1977) and Unfinished Tales (1980) to light.

Christopher, born in Leeds while his father tutored at University there and later educated at Oxford’s famous Dragon School, joined the Royal Air Force and served in South Africa before lecturing at New College Oxford from 1964 to 1975 and publishing his own translation of The Saga of King Heidrek the Wise (1960). Described by his father as his “chief critic and collaborator,” he was warmly welcomed by such intellectual giants as C. S. Lewis, Charles Williams, Owen Barfield, Warren Lewis, and Nevill Coghill, as a junior member of the famed Inklings group that met at the Eagle and Child Inn on St Giles, Oxford.

Christopher only left his role at the thirteenth-century cloistered college to work on his recently deceased father’s papers in the mid-1970s. It was a decades-long and painstakingly laborious task that he maintained, with great stamina and energy right up until the end of his life. Christopher diligently edited the 12 volume History of Middle Earth, The Children of Hurin (2007), The Legend of Sigurd and Gudrun (2009), The Fall of Arthur (2013), Beowulf: A Translation and Commentary (2014), Beren and Luthien (2017), and The Fall of Gondolin (2018).

Sadly, Christopher’s was unable to ensure the fidelity of Peter Jackson film versions of both The Lord of the Rings and The Hobbit. Speaking to Le Monde from his villa in the South of France in 2012, Christopher accused Jackson of having “eviscerated the book by making it an action movie for young people aged 15 to 25.” He continued:

Tolkien has become a monster, devoured by his own popularity and absorbed by the absurdity of our time . . . the chasm between the beauty and seriousness of the work, and what it has become, has gone too far for me. Such commercialization has reduced the aesthetic and philosophical impact of this creation to nothing. There is only one solution for me: turning my head away.

And indeed, that is exactly what he did by also refuting the recent and rather underwhelming Tolkien biopic starring Nicholas Hoult and Lilly Collins — a lead I shall follow when the Amazon serialization of the prequel to The Lord of the Rings hits the screens, a televisual spectacular allegedly focusing on the Second Age of Middle Earth and starring the Iranian Nazanin Boniadi and Puerto Rican Ismael Cruz Cordova, a somewhat incongruous piece of casting which will no doubt be supplemented by various south-east Asians and Africans over the course of the plot. Perhaps it is best that Christopher did not live to see his efforts sullied by such Hollywood virtue signaling.

So as per Bilbo’s Last Song, I say adieu to a great man who fulfilled the wishes of all Tolkien purists and hope that he may rest in the knowledge that his endeavors were not in vain.

Day is ended, dim my eyes,
but journey long before me lies.
Farewell, friends! I hear the call.
The ship’s beside the stony wall.
Foam is white and waves are grey;
beyond the sunset leads my way.
Foam is salt, the wind is free;
I hear the rising of the Sea.

Farewell, friends! The sails are set,
the wind is east, the moorings fret.
Shadows long before me lie,
beneath the ever-bending sky,
but islands lie behind the Sun
that I shall raise ere all is done;
lands there are to west of West,
where night is quiet and sleep is rest.

Guided by the Lonely Star,
beyond the utmost harbour-bar,
I’ll find the heavens fair and free,
and beaches of the Starlit Sea.
Ship, my ship! I seek the West,
and fields and mountains ever blest.
Farewell to Middle-earth at last.
I see the Star above my mast!