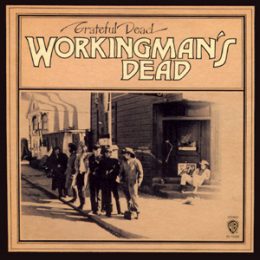 The Grateful Dead is the ideology of laissez-faire boomers condensed into a few strums of the guitar. They had a solid business model: Pilfer from your talented contemporaries, remove everything of real merit or sentiment, and then repackage this cultural detritus in a brand you can sell to your drug-addled peers. Unfortunately, they didn’t have much else.

On the topic of drugs, the Grateful Dead’s most unforgivable sin may have been the damage done to the psychedelic subculture that had begun to spread its wings in the 1960s. A far cry from the spiritual-intellectual studies of enigmatic minds like Huxley, the Dead succeeded in marketing drugs like LSD to the masses, leading to its complete cultural irrelevance as an entheogen, and turning public favor against hallucinogens in general on account of their association with gross, smelly hippies. One of the most remarkable substances on Earth was now simply a rite of passage on the road to being an insufferable, braindead normie. Let me tell you, dear reader, every time I see that ridiculous bear on a blotter of acid, I am filled with murderous rage.

Most popular music groups end up contributing something to the artistic corpus of the society they were famed in. Sometimes, they even do this unintentionally. The Grateful Dead, however, merely consumed artistic capital. They devoured jazz, psychedelia, folk, country, and blues, birthing nothing but a pointlessly long discography and a massive fanbase of generally useless people. A Deadhead sticker on the back of a vehicle nowadays is a surefire sign that the individual in question is either unemployed or in possession of obscene amounts of cannabis. Likely both.

Put simply, the music of the Grateful Dead has no exigence. There is no reason that it should exist, and yet it does, almost as if they merely intended to spite God. It is the spontaneous assemblage of the rapidly deteriorating culture of the 1960s if it were to be thrown inside a washing machine and run on the rinse-spin cycle. Ask a zoomer if they listen to the Grateful Dead, and they’ll emphatically respond in the negative. Ask some old man who reeks of body odor at a Bernie Sanders rally the same question, and you’ll be blessed with hours of him blustering about how much better things were when he was tweaked out of his gourd in San Francisco during the Vietnam War.

Eschewing their previous electrified, hallucinogenic sound, much like a criminal fleeing the scene of the crime, the Grateful Dead recorded and released the lackluster Workingman’s Dead in 1970. It’s a strong contender for the most forgettable album of the decade.

Workingman’s Dead begins with “Uncle John’s Band.” Like every song on this album, it contains absolutely nothing interesting. Both instrumentally and lyrically, it comes across as some kind of Walmart-brand Simon & Garfunkel. Major chords on an acoustic guitar with periodic licks in between have rightfully been resigned to the dorm rooms of college students unsuccessfully attempting to impress the girls they have over. The reason that the same lack of creativity has been given eternal life on this record remains a complete mystery to everyone with a taste in music more refined than that of a stoner.

“High Time” helps to define the album. The definition in question, however, is a competition in mediocrity. Where “Uncle John’s Band” was uninspired, “High Time” is downright lazy. Torn directly from the pages of somber country, but entirely devoid of any substance, “High Time” slides along at a painfully slow rhythm. Also of note is the presence of the word “baby” in reference to one’s lover; correct me if I am wrong, but the presence or absence of “baby” in a track’s lyrics seem to be a highly reliable test for quality. Jerry Garcia whining over the top of the most sanitized twang in the world is no recipe for good music.

“Dire Wolf” follows the exact same formula as the previous two tracks. It seems that the Grateful Dead were comfortable in referring to a grand total of two palettes for their compositions, varying only tempo and the lyrical content of the song. The same vague bluegrass influence meanders about “Dire Wolf” like a lost child looking for his parents. Garcia repeatedly pleads some folkish beast to refrain from murdering him on this track. It’s a shame that his cries were heard.

Perhaps the most insulting of the songs on this record is “New Speedway Boogie,” a lifeless attempt at a honky-tonk standard by a bunch of floozy Californians. The Grateful Dead are seemingly content to plop a generic instrumental down and begin waxing lethargic about anti-heroes. There’s nothing wrong with being influenced — in fact, all popular music can cite influence in its production style — but to appropriate the style guide of a particular genre and then change nothing makes you a cannibal of culture. “New Speedway Boogie” is unrelenting in its mediocrity. Were it not for Garcia’s fan-favorite whining over the top, this track could easily be mistaken for thousands of others.

“Cumberland Blues” again rips off the blueprint for jazz-influenced redneck music. It is slightly quicker than the last track, though! Perhaps the reason why the Grateful Dead’s rendition of this music comes across as so trite is on account of the band’s inauthenticity: They posed as counter-culture but made handsome profits by selling oblivious San Franciscans the music originally produced by working men in the nation’s heartlands. The Grateful Dead were the Elvis Presley of their times, peddling an unhealthy lifestyle coupled with music that was never their own.

“Black Peter” is constructed around the same five chords, with no changes in rhythm or melody between the chorus and the song’s verses. The only texturing present on this cut is the faint whistling of an organ. One curiosity of the Grateful Dead is their track lengths: “Black Peter,” for instance, rambles on for five minutes and forty-three seconds without so much as a discernable change in pattern, absent the smattering of additional or absent sounds to guide the listener. Much of this album is like that; it’s one thing to write simple music, but to gleefully repeat the same bar over and over again is tantamount to the autistic behavior of a sound engineer. Conversely, it does also make it easier for normies to recognize a tune. The Grateful Dead certainly have nostalgic sticking power; probably because their music was simple enough for a drugged-out boomer to comprehend, and therefore remember.

“Easy Wind” is another toxic tune about a folk character of ambiguous morality. He drinks too much, chases women, and ostensibly lives nearby a “bayou” of some kind. The track is a tortured imitation of the work put in by other American bands prior to the Grateful Dead, such as the modernized interpretations of The Animals, and the traditional music that this band cheaply copied their themes from. Old folk music had some amount of soul to it, in the sense that its oft-autobiographical plights could spark some sympathy. The Grateful Dead, eager to discard meaning at every turn, instead chose to write songs about nonexistent, abstract notions like speaking rivers and other nonsensical babble that would only be of groundbreaking significance to an average-IQ man on some mind-altering substance. We can at least thank the Grateful Dead for encouraging hordes of boomers to obliterate their critical thinking capacities, thereby preventing them from doing any real damage requiring forethought.

Finally, after about 30 minutes of flagellation, we arrive at the final track. “Casey Jones” is, again, another song about a folk anti-hero over bluesy riffs. Casey Jones, driving a train while high on cocaine, is one more entry in a long, long book of pointless parables. “Casey Jones” contains multiple instrumental breaks, where short plucks on guitar strings are placed on a pedestal as if they were some sort of spectacle worthy of beholding. The guitar solos on Grateful Dead songs are a superb reflection of the band’s output as a whole: They are typically unremarkable, easily identified by their influences, and unworthy of the space they occupy.

The work of the Grateful Dead is often classified as “psychedelic,” which may be partially true of the instrumental soundscapes on their other work. However, to call the output of a band “psychedelic” simply because of its nonsensical lyricism and endless references to drug use is shallow at best, and dishonest at worst. The Dead’s philosophy, if one could even call it that, was informed exclusively by illusory and transient pleasures that a softened mind would experience in the midst of an acid trip, or an acid-washed society. Nothing on this album implies the existence of a spiritual sublime, a higher-order, or even a sense of interconnectedness with the machinations of the universe — all hallmarks of “psychedelic” music. Rather, they churn out fake Southern standards and sing twisted versions of nursery rhyme tales.

There is little to be said about the Grateful Dead other than listing their sins. Whether it was the hollow theft of their musical style, their commercialization and subsequent ruination of psychedelics in the West, or simple blandness, the Grateful Dead do not make a strong case for themselves. Their music is seldom heard outside of establishments pandering to washed-up Boomers, or as the background noise to a period piece of some sort. The bands that cite the Grateful Dead as an influence are also, as a general rule, insufferable themselves. They are the index case of how truly mainstream the “counter-culture” of their era was; an easily marketed, easily digested piece of pop bunk, with a boatload of merchandise to accompany it.

It’s not an accident that Ben & Jerry’s, the favorite ice cream of suburban Democrats, has a flavor called “Cherry Garcia.”