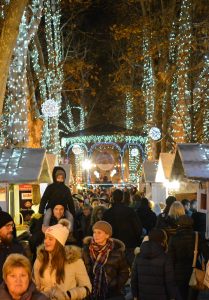 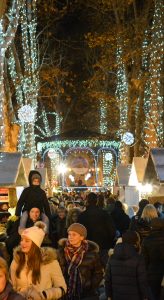 As I write this, a baby is staring up at me from a stroller, tightly packed with blankets to protect her from the chilly air. A bonnet fringed with pink lace covers her small head, and tiny blonde curls peek out from the edges. She is parked beside her parents and a third person, who seems to be a family friend. They are next to me at a café, where I am trying to concentrate on reading a newish translation of Being and Time. Now and then, the baby breaks my concentration by making little chirping, birdlike noises. Uncharacteristically, I am not annoyed by this. Why?

The parents and their friend are hardly more intelligible than the baby, for they are all speaking in a tongue quite foreign to me. You see, I am spending my winter holiday in Eastern Europe. I dread the long, disorienting transatlantic flights and the consequent jetlag, which usually hits me pretty hard. But I keep returning. It’s not because coming here makes me feel good; it’s because it makes me feel normal.

The strange thing about being here is that it feels like home. This is despite the fact that the place is, well, rather strange. In particular, the language is utterly baffling. I’ve tried to learn a bit of it, and have managed to absorb (from an audio course) helpful phrases such as “What is the electrical current in Bolivia?” and “The boy will close the door now.” I seldom have occasion to use what I’ve learned, since most of the people I encounter speak at least a little English. But I feel it’s the thought that counts; I don’t want to be one of those Americans who makes no attempt at all. 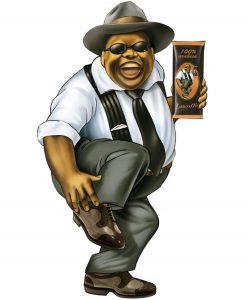 [2]Oddly, the spoken language seems to have little relation (so far as I can discern) to the written language. Consonants abound; one yearns for a vowel or two. There are few loan words from other European languages. The proper names are also strange to me. I know little of the history of the place, so the names on the statues don’t ring any bells. Coffee is sold with caricatures of black people [3] on the bags – images so “offensive” (by American standards) they would set off a nationwide scandal back home.

And yet I feel more at home here than I do in my own country. The reason is simple, and you may already have guessed it: this place is filled with almost nothing but white people. The exceptions are so notable they cause me to do a doubletake.

If you’re like me, you may sometimes not realize you’ve been experiencing stress until it suddenly goes away, and you almost melt to the floor in a kind of exhausted bliss. That’s how it is for me here. Leaving the house feels like walking into the kitchen in my socks. Walking the streets at one o’clock in the morning feels as safe as a roll in the hay in a padded room. If I collapsed on the sidewalk, I have no doubt that people would rush to my aid. Back home, if the same thing happened, I think I could count on being ignored or having my wallet liberated.

Working out in my local gym here in this Eastern European whitopia feels curiously comfortable, like it’s my own private facility. It wasn’t until the end of my first workout that the reason dawned on me. Back home, my gym is about fifty percent white, the other half being made up of blacks, Hispanics, and Arabs. Now, none of these people is openly hostile – in fact some are quite friendly. Yet there is a tension I feel. Whenever I push open the locker room door and find a black face staring back at me, I feel a little jolt in my gut, a jolt that seems to say “danger!” Now, liberals, of course, will say this makes me a racist. Actually, it just makes me a normal human being. As F. Roger Devlin notes in his essay “The Intelligent Person’s Guide to Race and Racial Differences [4]”:

When white and black people are shown pictures of strangers, the amygdala region in their brains displays heightened activity, indicating vigilance or wariness toward unfamiliar faces. But when the pictures are shown a second time only the other-race faces provoke high amygdala activity: the brain perceives the same-race faces as “familiar” after only one viewing.

And, by the way, it’s been found that conservative brains have bigger amygdalas [5] than liberals (and bigger everything else, I would imagine). The spin that liberals put on this is that we are “ruled by fear” and imagine threats where none exist. Actually, no: we perceive real threats to which brain-damaged liberals are oblivious. We are the normal and the healthy, with all brain parts firing on all cylinders.

In that same locker room, I am reluctant to sit down on anything. Visiting the toilet is an uncomfortable experience (even though the paper is soft and the visit free). I have no desire to use the sauna, and I go home to shower. This is another conservative brain thing, and a good deal of attention has recently been devoted to the research surrounding it. Social psychologist Jonathan Haidt and colleagues have found that conservatives tend to experience stronger feelings of disgust, and stronger fears of contamination. (See here [6], here [7], and read Collin Cleary’s important review of Haidt’s The Righteous Mind here [8].) Please understand, it’s not that I dislike Pedro. He’s quite friendly, and I’ve been happy to spot him on the bench press a few times. But some deep, reptilian part of me just really doesn’t want to sit where he’s sat. In Eastern Europe I feel quite, quite differently. It’s like sitting where my cousin or best friend sat. And unlike Pedro, these people are really easy on the eyes.

My US gym anxiety both precedes and follows my visits. You see, going to and from the gym is one of the few occasions on which I actually have to use my car. And each time I feel like I am taking my life into my hands, because a lot of these people just don’t seem to know how to drive. My little area of Gotham, I should mention, is among the most “diverse.” Here in my Eastern European retreat, I have not had occasion to drive (I use the tram instead), but from what I have been able to observe the people here know what a red light means. At home, I am hesitant to cross the road at a stop sign, for I can’t be sure that the cars are actually going to stop. And there’s a part of me that suspects that for some of my neighbors, my pale face would be too tempting a target.

Over here, people seem only too happy to stop for me. When I cross at the crosswalk and glance at the driver, I see a face like mine. And he sees a face like his (though I am slightly paranoid, and am sometimes convinced everyone can tell I’m an American). If I drop something on my way across the street, someone will let me know (I can’t understand what they are saying, but pointing is the universal language). Back home, they will just take what I dropped. Here, if my shoes are untied people will tell me. Back home, if had a massive cardiac arrest on the subway platform, people would pretend they don’t see me, or step over my still-twitching body and pack themselves into the train.

Back home, I have to watch what I say. Certain conversations have to be conducted in hushed tones – especially in restaurants. My friends insist; they don’t want to wind up on the evening news as a result of my loose tongue. If I call those same friends while riding in an Uber to discuss, say, crime statistics or immigration I must do so in code: I don’t want to be banned from Uber. Having to watch our mouths is one of the blessings of diversity. You see, diversity is such a rock-solid STRENGTH we must walk on eggshells around each other lest it should all suddenly come tumbling down because somebody uttered a discouraging word. Here in Osteuropa, I can talk exactly as I please; no one cares.

As soon as I got here about a week ago, I headed straight for the Christmas market. Stand after stand of sausages and meat-stuffed pancakes, hot chocolate, mulled wine, candies and pastries, Christmas ornaments, and funny hats. I didn’t spend a cent; I merely looked and soaked up the spirit. “Think what it must be like in Vienna,” I said to a friend – then instantly felt lucky not to be there. You see, elsewhere in Europe going to the Christmas market is akin to riding on the outside of the subway, or playing Russian Roulette, or eating sushi in Nebraska. It’s an extreme sport; something for thrill-seekers. At any moment, Goddess Diversity could bless everyone with a stabbing, a bombing, or a homicide by truck.

There was a strange absence of menorahs at the Christmas market. Back home, every display of Christmas, in every office, store, restaurant, gym, etc., must be matched by some gaudy display of blue and white Hanukkah kitsch. Here there is no such “inclusiveness.” Outside public buildings there are Christmas trees and creches. No menorahs. Syrupy Christmas music is heard everywhere, most of it American (which annoys me, I have to admit). But it does not alternate with tunes like “Oy Hanukkah! [9]” (yes, that’s a real song). No one here says “Happy Holidays.” They say “Merry Christmas,” albeit in their strange, inscrutable tongue. Speaking of music, somehow I do not miss the neighbors back home playing salsa music with their windows open. Nor do I miss the rap music blasted by the passing cars of Democrats, which causes my windows to rattle violently.

In short, I do not miss diversity at all. God, I wish I didn’t have to go back! I know I don’t belong here, and I am genuinely grateful they let me visit. Their language and culture are quite different from mine, but the diversity crisis that now afflicts the US and Western Europe has shrunk, for me at least, the feeling of “foreignness” that the people and the place might normally have. Though I’d never be so presumptuous as to say it to them, I’ve come to feel like these are “my people.” It’s not a conscious decision, just a gut reaction. And that’s why that baby in the café doesn’t annoy me. That baby is our baby. We’re all in this together, cousins.

What I’m experiencing over here used to be the norm; it used to be what everybody experienced in their own nations. Everybody, in short, used to feel at home in their homelands. And everybody still has a right to that. We need to give it back to them; we need a “new world order,” a world in which “diversity” refers only to a diversity of ethnically and culturally homogeneous nation-states. Experiencing normal life, in a normal society for a few weeks, is an exquisite pleasure, like the sudden cessation of chronic pain. I feel at peace here, and so does my reptile brain. Follow my example: visit Eastern Europe, and give your amygdala a vacation. Get a glimpse of what we’ve lost – and are working to win back again.