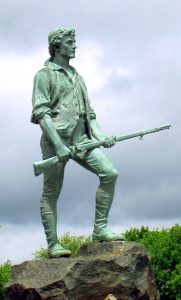 This rally was one of the largest right-wing demonstrations in recent memory and effectively communicated citizen dissent against gun control. Nothing violent happened, bad optics were at a minimum (but goofy optics were aplenty), and conservative media lionized the demonstrators. Liberal journalists embarrassed themselves with their desire to portray the protests as a neo-Nazi revolt. The protests were a clear win for the Second Amendment crowd and follow the rise of gun sanctuaries in Virginia. Dozens of towns and counties in the Old Dominion vow to not enforce the state’s new gun laws.

Virginia’s gun fight is a happening that points in a positive direction for future resistance against dispossession. Many doomers have said Americans would hand over their guns without so much as a complaint. Virginia proves them wrong.

While the resistance toward gun laws is good, there are issues with the gun crowd from an identitarian perspective. Many ardent gun nuts are just as “anti-racist” as the worst cucks of the conservative movement. They want to keep the issue to just the guns themselves—a material object—and uphold hyper-individualism. The gun issue is implicitly racial, and only whites support gun rights. But the ones who make the biggest fuss about it are trying their hardest to keep the issue from becoming an identitarian cause.

This does not mean the issue is not worth fighting for and that their efforts are bad. It just means we need to push the issue in the right direction.

Guns are one of the few issues that Middle Americans will rise up over. That does not mean they will start the second American revolution—it just means they will find ways to resist a gun grab. Many right-wingers fantasize about a mass violent uprising if the government passed gun control. It wouldn’t be like that, but an oppositional force would arise that would effectively nullify the law. Take the example of gun sanctuaries.

At least 90 percent of Virginia’s counties have declared themselves gun sanctuaries, meaning they won’t enforce the state’s proposed new laws. The state legislature passed three laws last week that would expand background checks on firearm purchases and restrict where a person could take a firearm. The state is considering a red flag law that would allow judges to revoke the gun rights of any individual he deems a threat. Red flag laws could be used to bar dissidents from owning a gun. Other states have used red flag laws to disarm shitposters who joked about the Joker premiere.

Fortunately, rural Virginia does not want to enforce any gun law the legislature passes, putting the state in an uncomfortable position. The new gun laws have sparked a backlash that defies expectations about boomers and Middle Americans. Rather than complaining about the issue on the internet, they’ve taken to the streets, taken over town halls, and forced their local officials to support their gun rights. This speech from one local sheriff demonstrates how serious the gun boomers are.

We are behind you all the way #Virginia #NRA #Trump #VirginiaRally #America pic.twitter.com/O33qh0shTw

Gov. Ralph Northam is not going to send in the National Guard to enforce expanded background checks; Northam can just hope the courts take his side and force rural counties to comply.

The gun sanctuaries possibly foreshadow what would happen if there was a national gun confiscation program. A few rural sheriffs would say they would not participate in such an “unconstitutional” practice. Then a red state governor would say he’s ordered all state officials to not follow the law. Then a few more governors would defy the law. Eventually, half the country would say it wouldn’t enforce the law, and the national government would likely back down. It can’t send the Marines to every part of rural America. Libs don’t have the guts to commit to the kind of violence and militarization that gun confiscation would require—at this moment at least. That’s why they’ve moved on to red flag laws, which would allow left-wing judges and bureaucrats to take guns away from political enemies incrementally.

Gun rights are implicitly a racial issue. The Second Amendment was enacted so the founding stock could defend themselves against Indian raiders and slave uprisings. The founders wanted its citizens to be capable of self-defense. The right to bear arms is a core part of being a citizen; to not have the right makes one a mere subject. Americans still need this right to protect their homes and families. Liberals support gun control because it strips white Americans of their self-defense. They want all Americans dependent on our corrupt nanny state, and the elites see armed whites as the real threat to their power. Armed non-whites, on the other hand, are just part and parcel of life in modern America. Liberals will gleefully share photos of rifle-toting Black Panthers but get triggered by white guys in tactical gear.

Many conservatives prefer to say we need guns to defeat tyranny and insist the Jews could’ve overthrown Hitler if they had guns. (The historical illiteracy required to believe the last point is too much to bear.) It’s far more reasonable to say Americans need guns for self-defense and self-defense is a cornerstone of citizenship, just like the right to vote. But nope, gun advocates believe their home arsenal will topple the federal government when it refuses to sufficiently respect Israel.

Gun nuts’ extreme individualism precludes them from presenting a threat to the federal government. They’re not united by their love for their community or people; they just really care about this one object. Many revolts have occurred over things more minor than gun confiscation, but gun nuts insist that their cause is separated from anything bigger than the guns themselves. This mentality isolates them and makes their “boogaloo” fantasies the stuff of mid-life crises. They imagine the resistance can begin in their suburban cul-de-sac, and all it takes is for the brave soul to walk out of his garage decked out in discount marine attire.

Many of the militia groups that indulge in fedposting are just as opposed to “racists” as the federal government. Oath Keepers assaulted racial nationalists who attended their events in 2017 and publicly condemned anyone who may think America has a racial basis.

Supporters of the Richmond Rally were thrilled to find a few black attendees and made sure to highlight them as the face of the event. Supporters were desperate to prove that gun rights have nothing to do with white identity.

However, gun rights will only be protected by whites. Whites are the only group where the majority (54 percent) believe it’s more important to protect gun rights than impose gun control. Seventy-five percent of Hispanics and 66 percent of blacks think the exact opposite. Asians favor stricter gun laws by an astounding seven-to-one margin.

Demographic change will tread on you, Mr. libertarian gun owner.

In spite of the gun nuts’ cringe, gun rights are still a good fight, and demonstrations like the Richmond Rally push Middle America into the right direction. Gun rights are arguably the second most important issue after immigration, and this debate offers the opportunity to awaken whites to their demographic plight. Guns are an integral part to white American culture and to lose the right to bear them signals our dispossession.

If a Democrat wins in 2020, gun control will be a top priority. There will be more happenings like Virginia, and more whites will feel empowered to stand up for their rights. They just need to realize that these rights will depend on a majority white America. Globalists, effeminate white liberals, and non-whites want to take your guns. The libertarians can whine about identity politics all they want and how gun rights transcend this paradigm. But the gun issue is as much about identity politics as immigration.

Only a nice white country can guarantee your right to bear arms.

« In the Shadow of My Father