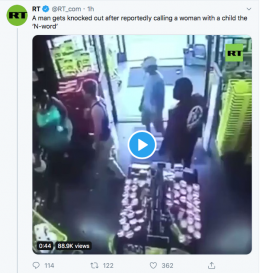 Do white people deserve to die for uttering the word “nigger”? Blacks, prompted by the mainstream media, increasingly say “Yes.”

The intersectional nature—yes, I’m taking intersectionality from the Left; I’m coming for it all—of an anti-white media and the propensity for extreme violence among blacks is creating an increasingly dangerous environment for whites.

We are faced with two groups that are both hostile and adverse to our interests on the whole, with one group attacking whites with a license granted by the other. A video came across my newsfeed with the title “A man gets knocked out after reportedly calling a woman with a child the N-word” (emphasis mine).[1] [2]

The security camera video from the convenience store depicts what appears to be some argument between a young white man and a black woman. The young white man is then sucker-punched by a much larger and older black man. The white man stumbles to his feet and then is hit several more times.

The headline of the same incident from another media outlet reads, Shocking moment ‘white supremacist’ gets knocked out TWICE by a stranger after ‘calling a black woman with a little girl the n-word’ [3]. There is no audio evidence that the word “nigger” was used by the white man who was attacked. The Daily Mail article, however, called the violent attacker a “bystander” who “confronts the white man and gives him one hard punch in the face.” Then, blaming the white man who has been labeled a “white supremacist,” writing, “It appears he had more to say though, prompting the black man to punch him repeatedly at least three more times in the face, sending the man back to the ground.” As if it is the white man who somehow “prompted” the attack on himself.

From a similar story out of Virginia: There was some altercation between a white woman and a black man in a 7-Eleven, ending with the black man punching the white mother, killing her. The black man claims she called him a “nigger,” justifying his attack. [2] [4]

Another white woman, this time at a Popeye’s, was body-slammed in the parking lot by black employees. Fox News also reported on the story with a headline meant to indemnify the violent attacker. It reads: “Popeye’s employee says viral video of body-slammed customer doesn’t tell the full story.” [3] [5] The “full story?” The blacks claim the white woman uttered the magic word. The magic word that has the power to turn what we are told are otherwise productive and cooperative members of society into rampaging feral brutes in fits of uncontrollable rage.

Video from downtown Minneapolis shows a white man being attacked, beaten, stripped, robbed, and stomped on by a dozen or so blacks. The local media reported this as a “staffing issue.” [4] [6] The gang-attack was not the first to happen in Minneapolis by far. Solutions forwarded all seemed to be about increasing the presence of police in the area, not about the root cause. Commentators on social media speculated that the white man deserved the prison gang-style beating because “maybe he called one of them a nigger.” Others wanted to “wait for more information” before jumping to any conclusions. “More information” meaning, maybe the white man uttered the magic word that can summon violent demons from the depths of the abyss, which of course would mean the gang-attack would somehow have been justified.

I’m a frequent viewer of World Star Hip Hop. I have been for years. It’s probably one of the best sites out there if you want to get a good look at urban vibrancy and to see how teens, Democrats, and rappers—real and aspiring—feel about whites. With no exception that I know, when a video is posted of a black person violently attacking a white person, the headlines on the videos always allege the white used the “n-word.” Interestingly, the videos rarely capture anything leading up to the attacks, and when they do, the word “nigger” is not heard. Most who comment never seem to catch this, however. They simply take the headline at face value.

Here are a few examples: 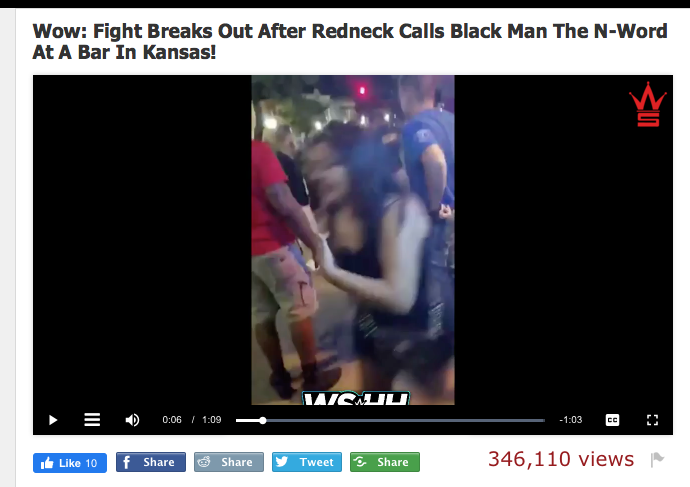 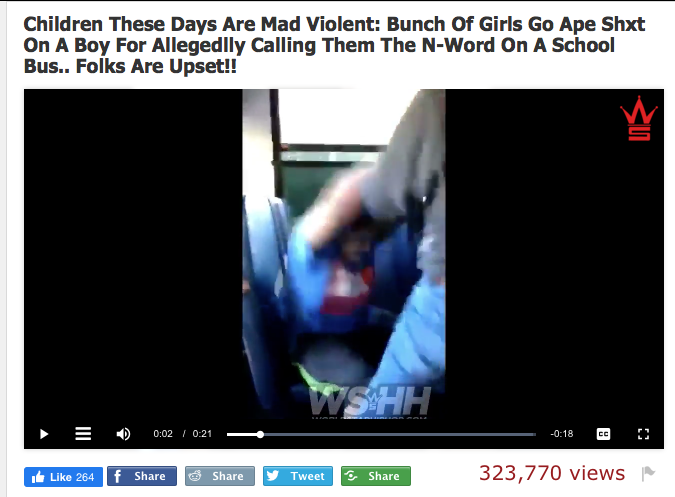 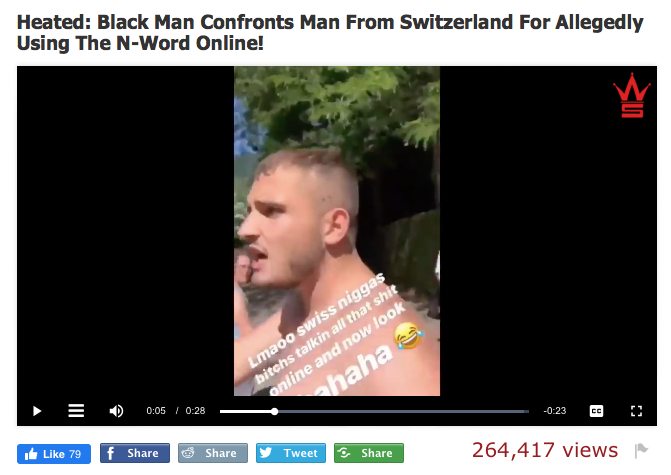 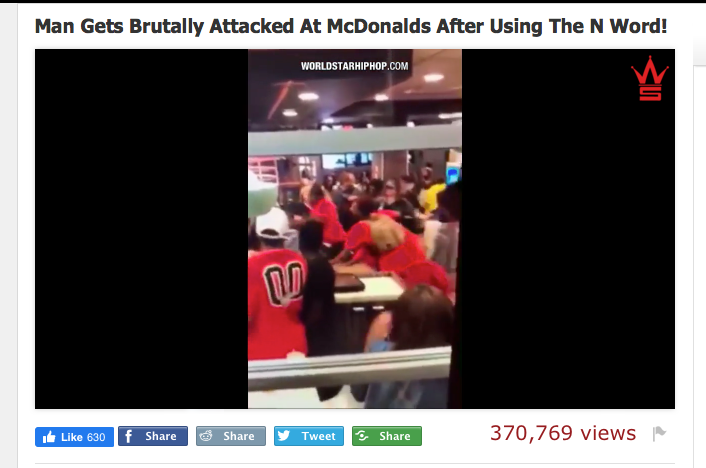 Time and time again we see this same framing, from World Star Hip Hop to Fox News, and all outlets in-between.

What does the law say about this?

Fighting words are not an affirmative legal defense in the US.

You cannot attack a person and escape legal punishment by claiming that your victim uttered so-called fighting words.

This is of course known by the media, yet they are writing these stories and framing the headlines in such a way that gives attackers of white people some sort of pseudo-moral and legal authority to lash out. Or, after attacking a white person, they can simply say they were called a “nigger.”

The paradox here is that if any of the claims were true — that a white person called a black person a “nigger,” and that prompted the black to violently attack the white person — doesn’t that simply prove we are dealing with the genuine article? What else would you call a black person who is impulsive and violent, who is unable to delay gratification or think ahead? Call them what you like, these are brutish traits that have led to massively disproportionate black-on-white crime.

Martin Luther King Jr. said he dreamed of a society in which blacks were judged not by the color of their skin, but by the content of their character. But for the most part, white people have always done that. It is in the character department that blacks are found wanting.

The media apparatus, by running headlines and articles that seek to excuse random attacks on white people, is abetting in criminal behavior. They are nearly coconspirators with street criminals, giving them the impression that claiming to hear the word “nigger” is an affirmative defense, allowing them to attack a white person for any reason with impunity.

A survey of interracial violent crime tells us this narrative is entirely fictitious and is used to create a more hostile society towards whites, one where the younger and older members of our society are faring the worst.

Looking at broader data we find a clear trend. The absolute majority of violent interracial crimes between whites and blacks involve whites being attacked by blacks. Whites being attacked violently by blacks account for 90% of the violent felonies between the two races.[11] [17] Looking at the National Crime Victimization Survey published by the Bureau of Justice Statistics, we see how troubling this 90% figure is and to what magnitude the problem exists. 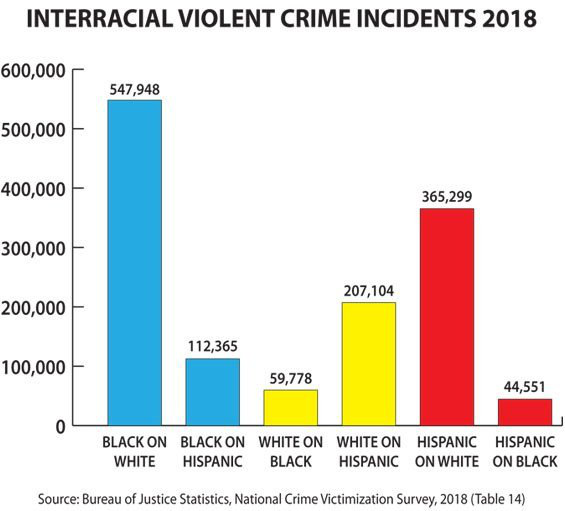 The figures are astonishing. Whites are violently attacked every year by non-whites to the figure of over 1,200,000. Blacks make up over 500,000 of those, Hispanics add over 300,000, with Asians and “other” making up the remainder.[12] [19] The non-white races attack whites at a massively disproportionate rate compared to them being attacked by whites, something over twenty-to-one.

Over one million white people and their families have their lives turned upside down each year through non-white home invasions, carjacking, muggings, assaults, and rapes. One million this year, last year, the year before, and so on. Ten million or so over the past decade since Counter-Currents was launched.

The numbers are clear. Non-whites are abusing our people on a tremendous scale, particularly the most vulnerable of us — women, children, the elderly — while the media hides most of it, excuses what is seen, and promotes still further violence by highlighting rare white-on-black crimes and promoting the “n-word” defense.

As horrible as it may be for white people to utter the word “nigger,” living with these people is far worse.