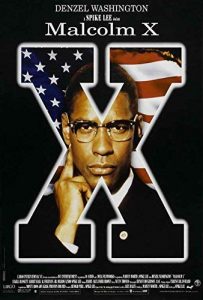 In the early 1990s, the pre-release hype and merchandising regarding Spike Lee’s Malcolm X movie was a sight to behold. Every black teen in my Midwestern home city (a major portion of which had been destroyed by the so-called Great Migration of blacks from the Deep South) had a Malcolm X hat. This hat was normally all of one color with a prominent “X” on the crown. In the winter of 1991/92, blacks also wore a parka-style coat with a massive “X” across the back. The ubiquitous of this fad was such that I recall the following joke:

“Yo’ mamma so fat when she wears one of those Malcolm X jackets, helicopters be tryin’ land on her.”

The hype surrounding this movie was enormous. I recall reading all sorts of lightweight but still overanalyzed intellectual takes on quotes by Malcolm X in US News & World Report at the time – looking back on it, the mainstream intellectual narrative was really both constrained and shallow prior to the internet. The movie didn’t live up to the hype, though. I recall two blacks in one of my easy-peasy elective classes in high school saw the movie and didn’t know what to make of it. After the release of the film, the Malcolm X hats, jackets, and t-shirts vanished. Recently, I re-watched the film and realized that the movie very much rises to the level of a flawed masterpiece, and the ideas presented therein deserve discussion from a white advocate’s perspective.

The movie is a glamorized and fictionalized[1] telling of the life of Malcolm X (1925–1965), who was born Malcolm Little. He changed his name to X because that letter expressed his unknown African name, and Little was a “slave name.” We discover that Malcolm grew up in a family with a Marcus Garvey “Back-to-Africa” supporting father and a “High Yellow” mother; Malcolm X’s mother, was the product of a white on black rape. Malcolm’s father must deal with the Klan and the Black Legion (a Klan-like organization with a considerable following in Michigan in the 1930s). Malcolm’s father is eventually killed by these racists, but his death is ruled a suicide so his family is not able to get the life insurance payout. This causes his mother to go mad and be put in an asylum. The family is broken up and the children put into Foster Care. Malcolm becomes a Zoot Suit[2] wearing “playa” and he travels around the areas that had large black populations that had not yet been destroyed in the 1940s, including Houston, Detroit, Boston, and Harlem.

Malcolm makes a decent living as a thief and sleeps with attractive blonde white women. He also runs numbers for a gambling bookie. Eventually, he is caught and sentenced to a long stretch in prison. Once in jail, Malcolm meets Baines, an incarcerated Nation of Islam preacher. Baines gets Malcolm clean and sober and teaches him about the philosophy of the Nation of Islam. This is when Malcolm Little becomes Malcolm X, and he becomes a dedicated follower of the Nation of Islam and its leader the Honorable Elijah Muhammad.

In America, black religious movements often have a warlord culture, rather than a monarchical culture with an orderly transfer of power. Sons often cannot duplicate the charisma of their fathers, or become apostates,[3] so new leaders emerge. These movements are also often sexually charged environments, with religious leaders having free access to multiple women.

Eventually, Malcolm X broke with the Honorable Elijah Muhammad over the latter’s sexual indiscretions and jealousy among other Nation of Islam ministers. Malcolm X then made the Haj to Mecca and Medina, became a Sunni Muslim, started a new Mosque along Black Nationalist lines (although it is heavily implied in the film he is moving towards universalism and integration), and was killed by Nation of Islam gunmen.

The film’s major flaw is its length. For example, the poignant lead up to Malcolm X’s assassination occurs to the score of Sam Cooke’s 1964 classic song “A Change is Gonna Come” –not a motif from that song, but to every note. Nonetheless, Spike Lee captures the color, evolving fashions, and rhythm of the black community in the decades after the “Great Migration.” Denzel Washington also ably captures the brilliant oratory and dynamism of Malcolm X.

Looking back on it, my black schoolmates didn’t know what to make of the movie because the ideas presented are not wrong, but out-of-focus.

In the early 20th century, white advocates passionately supported the Back-to-Africa movement. White supporters for this idea included Madison Grant and Ernest S. Cox. It was Jewish activists that ferociously worked against Garvey.[4] It is obvious that white advocates, even including those involved in illegal groups like the Black Legion, would logically support a Back-to-Africa social movement.

Additionally, the scenes of white “Johns” seeking black female prostitutes, as well as the rape backstory of Malcolm X’s mom, are likewise out-of-focus. White men don’t have much interest in black women. White-on-black rape is rare, and black female prostitutes are seldom patronized by whites. This was as well known in 1992 as it is now.

The message of the Nation of Islam and Malcolm X is also out of focus. The term “white devils” is used enough in the movie to be salacious and controversial, but in my own readings of the Nation of Islam’s literature, I’ve found that their ideas are highly nuanced. They “spew” less hatred for whites than the mainstream media. Instead, they often focus on the Jewish Question. Indeed Malcolm X himself focused a great deal on the JQ in his ministry, but Alex Haley downplayed this in his Autobiography of Malcolm X, and the film only gives a cursory statement on the subject. There’s no serious study of why Malcolm X, who genuinely supported the uplift of his people, would be critical of Jews for no apparent reason.

In short, the Nation of Islam is a genuine social movement that seeks to elevate its people. More an offshoot of Low Church Protestantism than Islam proper, it arose when blacks moved from the simple Southern countryside to complex, problem-filled, urban environments with many temptations. The Nation of Islam is thus a legitimate response to such circumstances. The NOI also preaches racial separation. Thus they should support a North American White Ethnostate, as long as they get their own nation as well.

Malcolm X’s career as a dead martyr is clearly stage-managed by integrationists. In the film, the character Malcolm X goes from talking about racial separation, crackers, and white devils to a universalist globalism after he goes on a pilgrimage to Mecca and sees white Muslims. The shooting of Malcolm X can thus be portrayed symbolically in the film as angry black separatists killing a budding integrationist rather than the personal feud and religious schism that it was.

The real Malcolm X did not change from a nationalist to an integrationist after converting to Sunni Islam, because he put race and politics before religion. He focused on Black Nationalism first:

Islam is my religion, but I believe my religion is my personal business. It governs my personal life, my personal morals. And my religious philosophy is personal between me and the God in whom I believe; just as the religious philosophy of these others is between them and the God in whom they believe. And this is best this way. Were we to come out here discussing religion, we’d have too many differences from the outstart and we could never get together. So today, though Islam is my religious philosophy, my political, economic, and social philosophy is Black Nationalism. You and I — as I say, if we bring up religion we’ll have differences; we’ll have arguments; and we’ll never be able to get together. But if we keep our religion at home, keep our religion in the closet, keep our religion between ourselves and our God, but when we come out here, we have a fight that’s common to all of us against an enemy who is common to all of us.[5]

The real Malcolm X, not the character, is on to something here. A nation based on blood and race can tolerate a wide range of differing philosophical and religious views as long as those views are subordinated for the good of the race.

[1] It is likely that much of what was written about Malcolm X is not entirely true. The Autobiography of Malcolm X was coauthored with Alex Haley, who had a less than stellar reputation for truth. For more info: https://www.amren.com/features/2012/10/malcolm-x-a-model-for-white-advocates/

[2] The Zoot Suit itself was a conscious act of racial rebellion. The suit deliberately used more fabric than was necessary at a time when fabric was rationed to provide uniforms for the war effort. It was worn by blacks and Mexicans in Southern California. Zoot Suit wearers gained a reputation for criminality, and in Los Angles, white soldiers and sailors spontaneously rioted against Zoot Suiters. Gangs of white G.I.s would beat up a Zoot Suiter, strip off his suit, and burn it in the street.

[3] See Derek Black and Frank Schaeffer for two examples of sons going their own way.

[4] The trial of Marcus Garvey featured Jewish prosecutors, Jewish defense lawyers, and a Jewish Judge. Garvey didn’t have a chance.