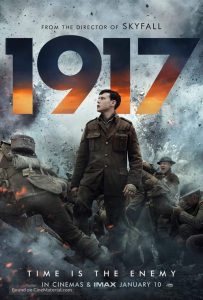 Set on the battlefields of northern France during the First World War, Sam Mendes’ 1917 follows two lance corporals racing against the clock to deliver a message to a certain colonel ordering him to call off an attack that would result in British defeat. Like Peter Jackson’s 2018 documentary They Shall Not Grow Old, which features colorized footage of the war and audio interviews of former soldiers, it seeks to capture the human side of the war and the everyday realities of a soldier’s life. The result is both technically astounding and emotionally powerful. 1917 is one of the best war movies of the past decade.

The most notable aspect of 1917 is Roger Deakins’ masterful cinematography. The film is comprised of long cuts seamlessly stitched together to create the appearance of being one continuous take. It feels as though the journey is unfolding in real time. The camera is immersed in the action, as if from the perspective of a third soldier, which makes it even more visceral and real.

The one-shot approach meant that everything had to be meticulously choreographed so that the set and script would be in sync. The level of craftsmanship on display is hugely impressive. But the film’s technical virtuosity is understated and never ostentatious. It is not a mere gimmick, as any other approach would have been less effective.

1917 opens with soldiers Blake (Dean-Charles Chapman) and Schofield (George MacKay) resting under a tree when Blake is told to “pick a man and bring your kit.” A general informs him and Schofield that aerial photo reconnaissance has revealed that the Germans have relocated to the Hindenburg Line, where their defenses are stronger. Unaware that they are being lured into a trap, one British battalion comprised of 1600 men—Blake’s brother among them—plans to advance. Communications have been cut off, and Blake and Schofield are tasked with delivering the message by foot.

The following sequence trails the two as they weave their way through the mass of bodies packed in the trenches. The portrayal of life in the trenches is very thorough and accurate. The soldiers in the film were played by a total of 800 young Englishmen (much of the film was shot in southern England) who went through a six-month-long training camp in which they were schooled on trench warfare and assigned tasks that were part of soldiers’ routines. They were also made to endure twelve-hour-long filming sessions so that boredom and numbness would come through in their acting.

After emerging from the trenches, Blake and Schofield proceed to trek across the bleak wasteland that is No Man’s Land. It is truly harrowing. At one point, Schofield slips and finds himself beside a human face—deathly pale, eyes gouged out, mouth frozen in terror.

Blake is unexpectedly stabbed in the gut off-camera by a German airman whose life he saved after his plane crash-landed. It is a commentary on the senselessness of the war. Schofield holds the dying Blake in his arms and assures him that he will complete the mission.

The most stunning set piece in the film is a bombed-out town lit by mortar explosions. The flares are perfectly timed and create a phantasmagorical interplay of light and shadow that has a nightmarish quality. The whole thing reminded me of Mordor. Of course, this is not a coincidence, as Tolkien’s experience in the war had a great impact on him.

In the town, Schofield dodges a pursuer by hiding in a shelter, where he meets a young woman nursing an orphaned infant. He gives her milk and supplies. The three of them are like a family. Schofield tears himself away from them before long, remembering the urgency of his mission. It is tragic, but it is also a testament to his stoic heroism.

Schofield arrives just as the attack is about to begin. He does not make it in time to prevent the advance of the first wave of soldiers, but the commander halts the attack and prevents further advances. Blake’s brother went in the first wave but survived anyway. The inconclusive ending is perhaps a nod to the moral confusion and uncertainty that arose in the aftermath of the war.

Aesthetically and stylistically, 1917 owes a lot to Christopher Nolan’s Dunkirk. And as in Dunkirk, the Germans don’t play much of a role in the film. They are rarely referred to by name. Above all, the film is about two ordinary Englishmen and the hardships they endure in their mission to save the lives of their countrymen.

There is only one concession to political correctness. Schofield encounters another battalion soon after the incident, and a kindly Sikh soldier wishes him well on his journey. But this is a minor point.

Movies about the First World War are made much less frequently than movies about the Second World War because they don’t allow for sanctimonious moralizing about the Holocaust and narratives about evil Nazis. The average person does not have strong feelings about the First World War. Moral righteousness is not popularly ascribed to either belligerent, in the same way that men like Napoleon and Alexander the Great are simply seen as military commanders as opposed to men who were either “good” or “evil.”

This is risky for Hollywood, because the absence of a good vs. evil narrative reveals the similarities between the parties involved. People might start to realize that the Allied soldiers who thought they were fighting for a good cause were actually betrayed by their respective governments and were made to slaughter their racial kinsmen.

But the lack of such a narrative makes for a richer drama. Instead of a one-dimensional moral crusade, we see ordinary men engaged in a struggle for survival. This has the potential to be much more moving. 1917 succeeds on this front. Its emotional impact matches the level of its staggering technical feats.

The Paranoid Style in Michiko Kakutani »