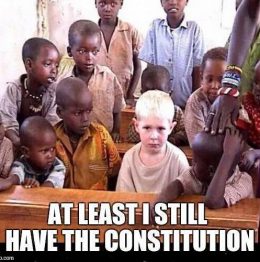 Do you think guns are more dangerous than they are protective? Do you think 20 percent is a passing grade in mathematics? Do you think free speech is merely a tool whites use to spew racist propaganda? Do you think it’s good when smart whites don’t get admitted to good schools because room needs to be made for Pakistani immigrants? Do you love fetuses being removed, limb by limb from a mother’s womb? Then you’ll love our impending multi-racial utopia, coming now!

The commonest age of whites in America is 58 years old. America needs fresh blood; we’re just not getting this reproduction thing right. Moreover, this will not budge substantially as 8 in 10 of the 74 million Baby Boomers die over the next 30 years, which is about one-fifth of the current population, because 65 million Gen Xers and 76 million aging Millennials will soon replace the geriatrics. The good news is that we’re accepting about three million immigrants per year to offset the old whites who didn’t have enough kids. So, not only will the US population continue to grow, but the raw number of whites in the United States will begin to shrink in 2026, accelerating the rate at which whites become a minority. 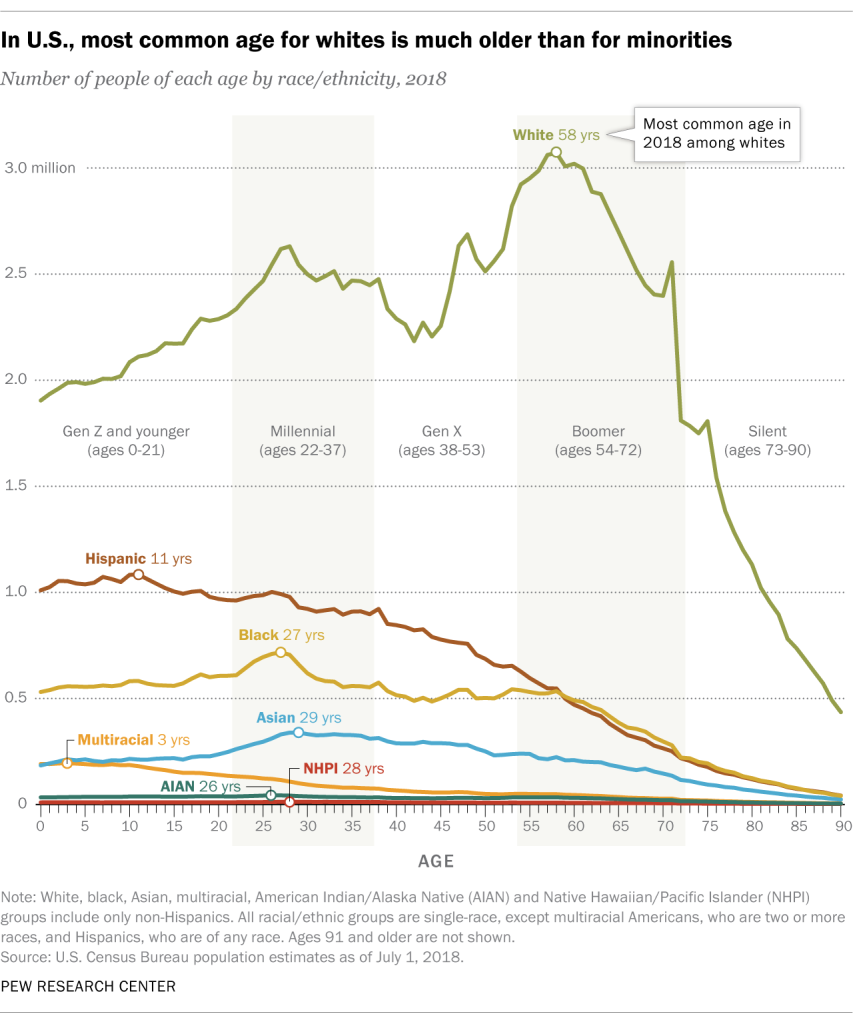 One can see in the picture above that the commonest age of minorities is significantly younger than for whites. For Asians it is 29, 27 for blacks, 11 for Hispanics, and only 3 for multi-race people. One wonders if the abundance of marketing campaigns for interracial couples and mixed-race children are working.

But this is fine because a lot of Christians are filling the void of this dying demographic. The country is only going to improve, economically and morally.

Good news, conservative reader, America is becoming increasingly Christian! Hispanics and sub-Saharan Africans are streaming in at record rates. This is a cause for celebration, as countries only improve as they become more Christian. Enough of these white, liberal atheists, we need some more Liberian Protestants and Salvadoran Catholics, am I right?

Followers of Christ are compelled to seek truth in all matters, for the rest of their days, until they reach Heaven. People who consider themselves conservative in America are overwhelmingly religious and most of the religiosity in America is Christian, so there is much overlap between the two groups. One could say, then, that most conservatives feel compelled to seek the truth.

In 2016, about six out of every ten Protestants, Catholics, and other Christians voted for Trump. That seems quite low, doesn’t it? The Media leads us to believe Christians vote in droves for Republicans. Moreover, conservatives don’t want to vote for the party that pushes fourth-trimester abortions, strict gun control, and hate speech laws, so who’s voting for Democrats?

Well, peeking into the Pew data, we see that a particular religious group does not vote for historically conservative parties, i.e. the politicians who strongly support the second amendment, free speech, pro-life, etc. That’s a brain-buster, to whom does this refer? It seems as if blacks, even the Christian conservative ones, refuse to vote for the Republican Party.

The Church of God in Christ, with more than six million members, votes 75 percent for Democrats. The National Baptist Convention, with 7.5 million members, votes 87 percent for Dems and the African Methodist Episcopal Church, which has 3.5 million members, votes a resounding 92 percent in favor of Democrats. That’s roughly 14.2 million votes for the Democratic Party, which is more than one-fifth of Clinton’s votes in 2016. Take note, too, that a Tennessee-based Church has African in its title with no mention of America. Forget election tampering or illegal voting procedures, Christians are keeping Republicans out of offices across the country.

What is the result of these rapid demographic changes? Well, Donald Trump is called a racist even as he continually repeats the statistic of the lowest black unemployment in American (world?) history. He is called an anti-Semite, even after his cabinet and family has been filled with Jews, he’s recognized the Golan Heights establishment and Jerusalem as the capital of Israel, he signed a bill to combat campus anti-Semitism, and Mark Levin called him the first Jewish President. He is slandered because he is an outsider of the political establishment and he is disliked by millions of black and Hispanic voters for the sole reason that he is white.

Because of this, the impeachment process is well underway. The House of Representatives voted to impeach (229 for, 198 against) and the Speaker of the House, Nancy Pelosi, fully intends to hold on to this for as long as possible since the Republican-majority Senate will likely not impeach. This is strictly a power game amongst a tiny group of elites who are completely unaware of the 350 million people who surround the borders of the country’s capital. The Democrats will do anything, regardless of law or norm, to delay or deny Trump his ability to do what his campaign promised. It’s just as clear that Republicans aren’t much help, either by the American system of checks and balances or the fact that many of them despise his outsider status as much as the Democrats.

What do the demographic changes mean for the little people? Well, if one considers themselves a proponent of the Constitution and its amendments, chew on the fact that half of blacks don’t see guns as protective, but instead believe guns put people’s safety at risk. Additionally, three out of four blacks believe hate speech is an act of violence. What exactly is hate speech? How does one draw the line between a sentence being hateful or not? Is it the emotion that flows through a sentence? Blacks believe speech, the saying of words, is an act, the doing of a thing, and a violent one.

One would presume that blacks understand true violence since they commit murder at more than five times the rate of whites. Moreover, free speech, the avenue by which political dissidents and minorities are allowed to express themselves without fear of legal suppression, is seen by minorities as harmful to minorities. This circle of anti-logic is the future of multi-racial America.

Fanning the flame, legal immigration, which we’re told is a boon to the economy and a blessing to American citizens, currently lends a true unemployment rate of 21 percent, which is double the rate prior to the recent Great Recession. Our people, the heart of the country, have not recovered from the 2008 crisis and it’s only getting worse.

It’s fitting that the newest generation is called Gen Z, as they represent the ultimate of Americanism and will live to hear her death rattle. Although, it won’t be strange for the majority of Gen Z kids since they are 48 percent non-white and will be right at home in the future Haitian/Honduran Christian utopia.

Think of that terrible movie Gravity wherein George Clooney selflessly sacrifices his life for Sandra Bullock, drifting into space until he dies of thirst or cold, whichever comes first. America’s death will be similar, whites sacrificing themselves for non-whites across the planet, although the film’s drama and beauty will be replaced with a dingy Netflix Original Series that’s thirty years long with dozens of films of whites nodding off on heroin or not waking up after ingesting a handful of oxycodone.

It is time to reject the I-don’t-see-race tomfoolery; race sees you. A high-minded individual being mobbed by a gang of minorities is not living by his principles, he is merely a bruised and bloodied chump. That non-whites and the uni-party establishment want us dead and gone is now openly admitted, just imagine how things will go when we too are a minority. 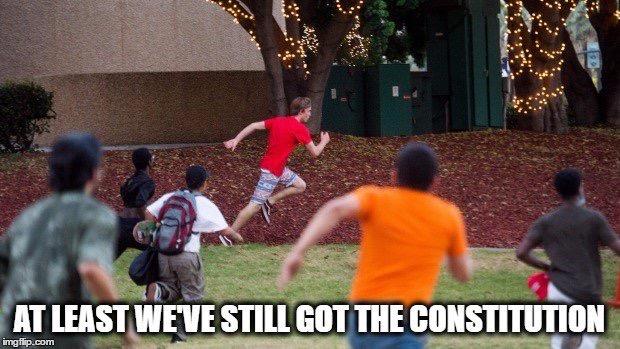