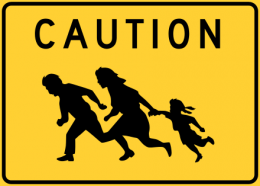 While having lunch with one of my friends, our conversation turned towards his comically absurd experiences of working a blue-collar job in the Glorious Democratic People’s Republic of California. I will call him Dan, to protect him from the ire of soft-handed cat ladies who have never done a day of manual labor in their lives. Inspired in part by Tucker’s recent segment exploring how a greedy Jewish hedge fund investor destroyed Sydney, Nebraska through outsourcing, we decided that his experiences are illustrative of how greedy employers have destroyed blue-collar jobs in the Worker’s Paradise through mass immigration. Although anecdotes are overused by vapid politicians as in the last State of the Union address, it is not inappropriate for us on the Right to make use of an occasional case study if doing so is informative instead of cringe.

To start, immigration has ruined some of the most basic and simple perks of working in general, and particularly for blue-collar fields. After completing our education, work is where we build a lot, if not most, of our friendships. Some people still talk to their neighbors, but in the suburbs and apartment complexes of California, neighborly interactions are about as common as rain. It used to be easier to bond with other whites and decent minorities at work (albeit you better not say anything nice about Trump), but employers preferring to hire immigrants has effectively destroyed that opportunity. Dan’s job is overflowing with invaders from the south.

The most obvious obstacle this causes is the language barrier. Most of them speak only basic English, enough to pass simple information like work schedules and tasks. However, it is impossible to have any meaningful conversation with them in English, not that they are capable of such a thing in Spanish anyways. His tales made me grateful for soyboys droning on about Rick and Morty. The invaders who are born on American soil are no better, because instead of speaking either English or Spanish well, they would rather equally defile both languages. This is not surprising, given what Dan had to report about their culture, especially their laziness.

Pretend for a moment that you are happy to only go to work to earn a paycheck. Even this becomes exasperating in an immigrant saturated workplace because no one else wants to work. The immigrant ‘‘worker’’ comes from and perpetuates a culture in which the line between work and play is entirely blurred, and which ridicules the concept of individual accountability instead of celebrating it. Part of why they are willing to work long hours (thus lowering the labor market for Americans) is because they are experts at goofing off while on the clock. Dan frequently catches them chatting or playing with their phones. If I had dared whip out a Gameboy when I worked my first job, my ass would have been fired on the spot, even if there wasn’t a single task to do or customer in sight! Instead of tackling the next task or asking for guidance, they must be micromanaged like mindless NPCs in a vintage PC game. Even organizing the tools which have been strewn about the shop with wild abandon requires Dan to left click and assign a unit, despite how it is neither physically or mentally demanding. Most white workers naturally organize their tools without being told. However, it should be unsurprising that Third Worlders are content to work in a job site that they trashed, given that they are happy to trash our parks and neighborhoods as if they were still in the Third World.

Whenever Dan tries to instill basic discipline on his vibrant co-workers, they invariably enrich him by talking back. ‘‘Whiteys mad again!’’ is a common phrase, which if the races were reversed would be a lawsuit instead of a joke. A passive-aggressive attitude is the norm, and even more so when they show up to work hung over. Friendships simply cannot grow in a work environment that is as toxic as the Tijuana River. Long gone is the comradeship of white men laboring together for an honest wage in exchange for an honest day’s work, an experience that an increasing number of white youths yearn for, but are denied. On the days that Dan has time for lunch, he eats it alone instead of with chad buddies atop a skyscraper.

Dan’s experiences also serve to thoroughly shatter the ivory tower perspective that liberals have of immigration and its effects on society. Dan does not know of a single immigrant co-worker who is not sending money back home through remissions. That money is leaving the American economy and our local communities to prop up dysfunctional nations. Many of them seem to be anchor babies, and one of their mothers has been deported. She is already trying to get back in, making use of one of the many treasonous pro bono attorneys who are happy to burden our legal system with fake and frivolous claims in pursuit of their far-left activism which they misconstrue as charity work. Pro bono is short for ‘‘pro bono publico’’ which means ‘‘for the public good.’’ I don’t know what ‘‘public’’ these subversive immigration attorneys are doing ‘‘good’’ for, because it certainly isn’t the American public.

Despite what the professional grifters of Conservatism Inc. may insist, they are as interested in becoming responsible citizens as they are in voting Republican. What little money they have after paying rent (you can also thank them for making the housing market a mess) they waste on frivolity instead of saving, or at least spending wisely. Dan always hears them say ‘‘treat yourself’’ and they certainly take their own advice by buying fancy sportscars and bling bling which they can ill afford. They also waste their money on alcohol, and I say this not as a purity spiraler but as a normal human. Dan and I are not opposed to having fun. In contrast, they drink heavily, even on weekdays, and thus come to work hung over. This also relates to how it is nigh impossible for an American worker to form friendships with immigrant workers, because almost all that they do outside of work is drink. In the halcyon days of Leave it to Beaver, working class dads could run into each other at their kids’ Little League games and the like. For Dan, the only way he could bond with his co-workers outside of work is if he chooses to become as degenerate as they are, which isn’t happening any time soon. American workers who are struggling to raise a family in a global economy thrust upon them by treasonous cosmopolitans are worthy of our help and respect. However, after lunch with Dan it became undeniable that these invaders live paycheck to paycheck entirely from their choice of a decadent lifestyle rather than from necessity, and as such are only deserving of our scorn when their poor life decisions lead to them exploiting our generous social services.

WIC (Special Supplemental Nutrition Program for Women, Infants, and Children) is one of their favorite social services to exploit. Every one of Dan’s co-workers with a family is on it. We high-trust Europeans see a program with a name like that as a safety net for those of our number struggling to make ends meet, and those of us who had to use it would do so graciously and responsibly. What white man of good moral character would want to see a hard-working dad not be able to provide his family with broccoli? Shut up and take my tax dollars already! However, Dan described how immigrants see it not as supplementing the family food budget, but as replacing it entirely, as in they would spend WIC dollars on groceries and not a cent more if they could. This doesn’t lead to broccoli for poor Tiny Tim, but empty carbs for Pablito. They view all other income as being meant for their frivolous diversions instead of their familial duties. As an aside, this is a poignant lesson in not allowing politicians to mislead with talk of how money is going to be earmarked for this or that project. Because dollars are interchangeable, spending should be analyzed through the lens of gross revenues and gross expenditures, be it for a family or government budget. Returning to the current matter, in the hands of immigrant workers WIC is abused to such an extent that it ultimately becomes a beer and bling bling stipend. However, American tax payers are ripped off not once, but twice by immigrant abuse of WIC. After the initial misuse, our health care system is then further burdened because immigrant families choose such unhealthy lifestyles which leads to basket cases of self-inflicted health problems, and by globalist edict we can’t turn away los gorditos from our hospitals even if they should have been turned away at our borders. There is no finer example of cucking.

Another delusion that Dan dismisses is that of the vaunted immigrant businessman. According to him, most of them are happy to stay at a low-level position because they manage (albeit with government assistance) to get by, and don’t want any responsibility in their lives, even the minimal amount from being a team lead. The ones who do become managers or businessmen are certainly not an asset to America because of their extreme in group preferences which results in blatant hiring discrimination. They are quick to hire—and slow to fire—workers from their own ethnic group, even if they are atrocious employees. If whites did this, it would result in a lawsuit. Most of us, even the most hardcore nationalists, wouldn’t. As Dan explained ‘‘If I owned my own roofing company, even I would hire on merit alone. I would get killed by the government if I didn’t, and despite being a proud white blue-collar American who is woke on everything, its just not our instinct to treat people unfairly.” That’s right libtards, we even own you on equal opportunity.

Another more subtle, yet profound effect of immigration is the death of the American Dream. According to Dan, ‘‘the American Dream is all about ambition.’. Under the red star, Americans are increasingly sandwiched between cheap immigrant labor and soulless corporations, which makes it almost impossible to pursue ambition, let alone start your own business. Over-crowding has killed it, there is no room to grow, and there seems to be no real entrepreneurship in these dreary days despite the latest GDP stat. Slaving away for a tyrannical corporation in return for a paltry promotion is not true ambition. The invaders Dan has interacted with see America as a place to be comfortable, not to strive for greatness. For Dan, the American Dream is to continue building on the ambitions of his ancestors with those of his own. He has a stake in the future because of his family’s past—the sweat and blood of his ancestors is mixed into our soil. They built America out of a rugged wilderness so their descendants could thrive, and now that hard-won inheritance is being stolen under the guise of redistribution. What they did was for themselves and their posterity. What Juanito does is for beer and bling bling.