(Too Many) Whites On Ice 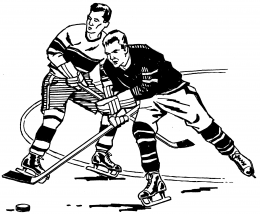 The Wall Street Journal says the National Hockey League must diversify or die.

The NHL is overwhelmingly white. In 2011, it was 93 percent white. It’s roughly the same today. There are 50 black NHL players, which is apparently an outrage. There needs to be much much more diversity, according to supposedly the right-leaning Wall Street Journal.

“Now, more than ever, hockey communities and its leaders must focus on the drastic demographic and cultural change that is coming. It is incumbent upon those currently in the game—for the sake of the game’s future—to ensure that the sport is perceived as welcoming to all,” a league policy brief argues.

The policy brief authoritatively states: “The diversity explosion that the country is now experiencing will alter all aspects of society in ways that can help the nation prosper, make it more inclusive, and increase its global connectivity.” Even the NHL has to say “diversity is our strength.” (The brief was written by a black NHL executive.)

He concluded, “This is something a lot of people don’t really know. This is a very different country than we were even 15 years ago.”

This report would be deemed a “conspiracy theory” if Frey said these changes were negative. However, the demographer only notes these changes to argue for more diversity. Frey’s analysis assumes that NHL team demographics must properly represent their respective cities. If that’s the case, the Detroit Red Wings must have an 80 percent black team to properly represent its city. There’s no way that will ever happen, but the argument requires that if taken to its logical conclusion.

Experts quoted in the Journal article imply the NHL may need to lower its standards and ignore more talented white players to satisfy the diversity cult. Neal Henderson, who founded America’s first minority youth hockey program, said the league should go out to the ghettos to find talent. He said the scouts should give constant encouragement to these non-white athletes so they’ll stick with the sport.

It should be noted that the NHL is diverse when it comes to national origin. The league has players from 19 different countries, and the vast majority of its stars are non-American. This shows the league does include players from a wide variety of backgrounds and cultures; diverse you might say. But diversity complaints are never about the inclusion of people with different backgrounds—it’s all about making an institution less white.

The NHL is unbearably white to its critics. To normal people, it shouldn’t be a surprise that a sport meant for northern climates is predominantly white. Africans and Hispanics aren’t exactly people of the North nor are they fond of the cold. Most American blacks live where hockey is not part of the local culture, and most blacks prefer basketball and football.  The culture around hockey is also incredibly white. For instance, the Winter Classic game features bagpipes and the players marching on to the rink like medieval warriors. Most of the players come from outside of America—it’s unlikely urban blacks will relate to Finnish players with odd names and funny accents. The few black players are very “white.” P.K. Subban, arguably the best black player in the league, sounds and acts like a white guy. He is very different from NFL stars who speak in Ebonics and obnoxiously dance in the endzone.

The NHL can spend a fortune on minority outreach and still not increase its black player count. Major League Baseball has tried to increase its share of American black players for years to no avail. American blacks constitute less than 7 percent of MLB players. This is in spite of the league pouring millions into minority outreach programs. Like the NHL, the MLB is accused of being too white. This complaint popped up famously during the 2013 World Series when both the Boston Red Sox and the St. Louis Cardinals boasted nearly all-white rosters.

However, major league baseball isn’t disproportionately white when compared to America itself. A little over 63 percent of its players are white, which is roughly equivalent to 62 percent of Americans being white. The league makes up for its lack of blacks with a large number of Hispanics. Over 27 percent of players are Hispanic and most of them are non-Americans. Still, the league is not diverse enough to liberal critics.

The two other major American sports leagues never come under fire for its player diversity in spite of being overwhelmingly black. The National Football League and National Basketball Association are 70 percent and 74.4 percent black, respectively. Those figures are grossly out of proportion with the American population and even their own fan bases. (Despite blacks being only 13 percent of the population.) The NFL’s fan base is 77 percent white. The NBA’s fan base is plurality black, but 40 percent of its fans are white. Neither league accurately represents its fans on the field or court. The NHL does reflect its fan base in the rink; 92 percent of its fans are white.

Now the NFL and NBA do receive diversity complaints. It’s not about the number of black players—it’s that there are too many white coaches.

The NHL’s belief it needs to diversify to survive is just not true. Both the MLB and NFL also have overwhelmingly white fan bases and thrive. The NHL doesn’t need to appeal to everyone who lives in a city with an NHL team—it just needs to appeal to white people. Its audience is growing, and TV networks expect the audience to expand during the current season. There’s no evidence that more black players will grow the audience or make ghettos brim with hockey jerseys. Depending on a black fan base also causes problems for revenue. Some NBA franchises privately grumble about how their black fan bases aren’t reliable revenue sources.

The NHL is the superior sports league because it’s the last sport of the white man. Baseball is too slow-paced and indulges conservative fantasies. The world never changes in baseball, and conservatives can pretend it’s still 1950 every summer. Hockey is much more fast-paced and aggressive. It celebrates white machismo in a way that no other sport does. Many of the white football and basketball players would count as “wiggers.” Hockey players rarely exhibit aspects of black culture. NHL arenas are more likely to play thrash metal than rap. The sport’s most famous commentator is Don Cherry, a Canadian who stands up for his nation’s silent majority and opposes mass immigration.

If one must choose a sport to watch, the NHL is the least pozzed choice. That’s why the Left wants to ruin it. Whites are not allowed to have white sports, white music, white institutions, or white spaces. They must be made so diverse that whites can no longer claim it as their own.

Hockey is a particular affront to liberal taste. Not only is it too white, it celebrates a white masculinity firmly rooted in white culture. That’s a big no-no, especially when big corporations sponsor the game. The elites’ ideal hockey league features players straight out of a Key and Peele sketch and exclusively plays rap.

Fortunately, meritocracy still rules sports leagues. Only the best players make it to the pros. For hockey, those players are white.