The Irony of Fate 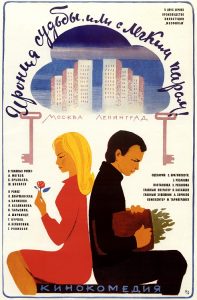 If you did an internet search of movies about or taking place on New Year’s Eve, the majority would most likely fall under the romantic comedy genre. Which makes sense, given that when you think about New Year’s Eve, your first thoughts are probably of drinking parties with friends, and more importantly, waiting for the clock to strike midnight with your significant other.

The Irony of Fate was a Soviet made-for-television romantic comedy that aired throughout the Soviet Union on January 1st, 1976. Despite its length (180 minutes broken into two 90-minute episodes), it became an instant hit and has been played on television every New Year’s Eve in Russia and other former Soviet states for the last 40 years. Moreover, the film gives insight into a period of Soviet culture that remains an object of nostalgia for many people who were old enough to experience it.

In order to fully appreciate the film, it is necessary to understand the history and culture of the Soviet Union in the 1970s, particularly the stagnation and social policies of the later Brezhnev era. To put it simply, the Soviet Union’s economy slowed down in the 1970s, and to counter the apparent signs of economic decline, Brezhnev attempted to improve living standards through housing and social benefits. This led to the construction of large apartment complexes where each small apartment would have the exact same layout, furniture, and features.

This concept is perfectly depicted through the film’s short cartoon, animated by Vitaly Peskov, which shows how these large, identical apartment complexes spread from city to city, country to country, finally engulfing the whole world. While the cartoon has quite a bit of humor, watching it in our current times is eerie, for we face the same issues today, as many scenic countrysides of the past are being replaced by endless apartment complexes and Starbucks.

The plot of the film is rather straightforward. Zhenya (Andrey Myagkov) is planning his future wedding with his fiancée Galya (Olga Naumenko) in Moscow right before New Year’s Eve. During their talk, Zhenya explains that he goes to the local banya (Russian bathhouse) every New Year’s Eve with his friends. While we get the sense that Galya disapproves of both his friends and their yearly ritual, the film follows Zhenya as he meets and gets drunk with his friends at the banya. After a long period of drinking vodka, they realize that one of their friends at the banya with them has a flight to Leningrad (St. Petersburg) that evening. So naturally, they all go to the airport together.

Through a very funny dialogue, they incorrectly assume that it is Zhenya that needs to fly to Leningrad and they help him board the plane, despite Zhenya being borderline unconscious from drinking. He eventually wakes up at the Leningrad airport, thinking it’s still Moscow. Zhenya then gives a taxi driver his address to take him home. Yet due to the Brezhnev-era city architecture, he still doesn’t notice that he’s in Leningrad because all the buildings look the same. Zhenya eventually goes to an apartment complex and gets into an apartment because his Moscow apartment key also works in the Leningrad apartment. Zhenya then passes out in the apartment’s bed, thinking that it’s his bed.

As you probably have guessed, the owner of the apartment, Nadya (Barbara Brylska), is shocked to arrive home to find a strange man in her bed. To make matters worse, before Nadya can kick Zhenya out of the apartment (he still thinks that he’s in his Moscow apartment), Nadya’s boyfriend, Ippolit (Yuri Yakovlev), catches them together, albeit arguing. Naturally, Ippolit finds it hard to believe that a stranger from Moscow could end up in Nadya’s apartment. Ippolit then starts to think that Nadya is romantically involved with Zhenya. To make matters worse, Galya, who is still back in Moscow, starts to become worried because she hasn’t heard from Zhenya since he went to the banya.

This is the main plot and the rest of the film plays out in many ways like a typical romantic comedy. There are some notable exceptions however. Right away, you get the sense that the film feels like a play, as the locations are limited to a few settings, often with heavy dialogue. This is because the director of The Irony of Fate, Elder Ryazanov, based the film on a play he had written in 1971 called Once On New Year’s Eve.

The next thing you notice throughout the film is the music. There are several songs that the characters (Zhenya and Nadya) sing throughout the film. The songs, along with the cinematic score, were written by Mikael Tariverdiev. The songs can best be described as Russian folk songs mixed with some ballads. The songs are very catchy, and the lyrics of each song often relate to the thoughts and emotions that Zhenya and Nadya are experiencing at that moment. The main theme of the film is even worked into one of the most popular songs performed in the film, “If You Don’t Have an Aunt” (если у вас нету тёти). While I greatly enjoy all the songs of the film, this song is definitely my favorite and I’ve been known to sing it (after a few drinks) at New Year’s Eve parties I’ve attended in the past.

So why am I writing a movie review about a romantic comedy made in the Soviet Union in the 1970s? Or better yet, why would I recommend the film to readers of this website? Because this film has historical importance, the music is memorable, and it has become a tradition in my life to watch this film every New Year’s Eve, regardless of my location each year.

I mentioned that many people in older generations have nostalgia for both this film and the period it was from. This is not to say that life was easy or pleasant in the Soviet Union in the mid-1970s. For all the social benefits or living standard improvements that some Soviet citizens experienced, it is well-documented that there were many citizens who found themselves homeless and starving due to the period’s economic decline. Many citizens were also censored and imprisoned through Brezhnev’s crackdown on dissent, led by then-KGB Chairman Yuri Andropov.

Nevertheless, many polls have shown that older Russian citizens have much more favorable opinions and views of the late Brezhnev era than of what has come since. Gorbachev’s Perestroika and Glasnost policies created many economic and social challenges during the 1980s. Moreover, Yeltsin’s policies for transitioning the new Russian nation into a capitalist economy in the 1990s (known fittingly as “Shock Therapy”) would only further increase the social and economic problems for its citizens. So this film can be seen as a historical and cultural relic before the noticeable decline of Soviet life.

In my opinion, the film’s music score could easily have competed with some of the Oscar-winning musical scores of Hollywood during that same period. The songs also have a lot of lyrics that mix humor and wisdom. Having seen it on TV year after year, even younger generations of Russians know most of these songs by heart.

Before US President Reagan met with Gorbachev, Reagan stated that he watched the Soviet film Moscow Does Not Believe in Tears several times in order to understand the “Russian soul.” While that film is an important Soviet film, I think Reagan should have also watched The Irony of Fate for the same reason. It’s a film that always puts me in the holiday spirit, and whether I’m with friends or alone, I always have a great New Year’s Eve watching it, just as many Russian souls have and continue to do so year after year.

» Give Your Amygdala a Vacation