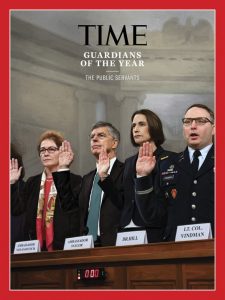 Its person of the year was globalist psy-op Greta Thunberg. The 16-year-old autist’s solutions are comfort food to urban elites who fear climate change, but refuse to acknowledge that the non-western world is now the chief source of environmental devastation.

It was expected that she would win. Time, which exists solely to furnish dentist offices with mediocre reading material, always adheres to conventional liberal wisdom. There’s no better way to comfort wine aunt liberals than to celebrate the brave autistic girl. Liberals love to exploit children for their causes, whether it’s Malala or Greta.

The magazine’s entertainer of the year was Lizzo, a morbidly obese black singer who loves to wear thong dresses and shake her body on state. (For your own mental well-being, I’m not going to link to these videos.) Lizzo embodies the magical black woman that affluent white female liberals worship. She’s fat, she’s sassy, she’s “talented” (her music is written by a legion of songwriters), and she flouts traditional standards of taste. It’s a weird fetish embedded into our culture—and we can’t extirpate it.

The sportsman of the year was actually a team of women—the U.S. Women’s Soccer team. They won the women’s World Cup while demanding equal pay and trying to exhibit machismo. The team was cringe to any male with a testosterone level over 250.

But the worst, most embarrassing pick was Time’s “Guardians of the Year [2]”: Public Servants. That’s right, paper-pushing bureaucrats protected you and I this year. From what terrible menace? Donald Trump, of course!

The celebration of bureaucrats is wine aunt liberalism at its core. To most people, bureaucrats don’t rate high in the heroism index. In fact, most people view them with contempt. But to their fellow affluent white liberals, they are heroes. They’re clocking long hours to defend globalist foreign policy, subvert immigration enforcement, and control personnel decisions. This is heroism to elite liberals. They expect the government to serve their interests and these plucky “public servants” are doing just that.

It doesn’t upset journalists and the elites if these arrogant apparatchiks run our policy rather than elected officials. They prefer it that way. The deep state conjures up images of intimidating men in black suits, but that image is wrong. Imagine these people as the deep state and you see how pathetic it is.

Time’s article about the “Guardians’ is insufferably fawning. In it, you learn these bureaucrats swore an OATH to defend the Constitution—which apparently stipulates that foreign aid can never be withheld. “In shouldering the 241-year principle of speaking truth before the American people, each performed a duty. The first day on the job, every federal employee takes an oath, swearing to the same promise the President-elect pledges on the West Front of the Capitol: to defend the Constitution. The courage they summoned was not to break the law, but to follow it.”

We’re told they’re workaholics (just like you, dear liberal reader!) protecting us from Trump’s desire to implement an America First foreign policy: “With a staff of overworked experts, [Fiona] Hill had been scrambling for two years to manage the chaos of Trump’s diplomacy.”

We’re also warned about the very future of America depends on these bureaucrats kvetching about Trump: “So what are the stakes of the Ukraine affair? Whether America still provides safeguards for lawful dissent, in an era when the President seems to mistake public servants for personal employees, and cozies up to the leaders of countries where dissent itself is illegal.”

Readers are also told about the horrible toll these bureaucrats face for complaining about Trump. Many broke down in tears as they talked to Time about the president’s mean tweets. So much for the stoic men in black…

The majority of the article is a biased recounting of the events that led up to Trump’s impeachment hearings. The impeachment witnesses claim Trump violated the Constitution by temporarily withholding funds for Ukraine to allegedly pressure that government to investigate the dubious behavior of Joe Biden’s son. Most people outraged by this act don’t care whether it was illegal or not. They already hate Trump and these public servants want to unseat him due to his non-interventionist instincts. It’s an impeachable offense to go against the deep state’s foreign policy prerogatives.

The media wants us to believe that Fiona Hill, Marie Yovanovitch, and Lt. Colonel Alexander Vindman (and you must always call him Lt. Colonel [7]) represent the deep state in all its honesty, selflessness, and dedication to the country. They are above reproach, and it’s basically treason to criticize them.

It’s laughable that the media continues to maintain this position in light of recent revelations. The Washington Post published the Afghanistan Papers last week [8] that showed the Pentagon knowingly lied to the American public for years. Americans were told we’re “winning” in Afghanistan and serious progress was being made. In reality, we were making zero progress and the Taliban remained as popular as before. Meanwhile, our supposed allies were corrupt and worthless fighters. These lies were perpetuated by our “Guardians of the Year” and fortified their foreign policy objectives.

Even though dozens of officials lied about Afghanistan, no one will be held accountable and America will still stay in Afghanistan.

A recent Department of Justice report on the FBI’s investigation of Trump laid bare the abuses and bias of public servants. The FBI relied on an easily debunked dossier compiled by a liberal opposition research firm to start the agency’s investigation. One agent falsified documents [9] to gain a probe of the Trump campaign. Many of the agents and officials who worked on the case were Trump haters who intended their investigation to derail the president.

Two of the officials involved in the investigation exemplify the deep state. Peter Strzok and Lisa Page were both middle-aged senior staffers at the FBI. They carried on an affair in spite of both being married. Their texts offer a glimpse into the mind of the deep state bugman. They were literally triggered by the thought of a President Trump and vowed to take him down by any means necessary. In public, Strzok and Page played to form. Strzok’s congressional testimony showed him to be an arrogant weasel with a creepy grin [10]. Page went full affluent white female liberal [11] and claimed to be the real victim in a Daily Beast puff piece. Like the impeachment witnesses, Page thinks it’s unjust for public servants to face criticism.

The two lovebirds resemble the great Coen Brothers’ Burn After Reading, which captures deep state denizens in all their pathetic glory. Americans should not rest easy knowing these are the people at the helm.

The deep state’s interests are antithetical to the historic American nation. It sees immigrants as the real Americans and middle Americans as ungrateful failsons. It believes American power should be used to advance globalism throughout the world, national interests be damned. It believes its earned the right to determine policy and doesn’t suffer criticism—all while claiming to defend democracy.

These are our elites. These are the ones who make policy. These are what our institutions look like.