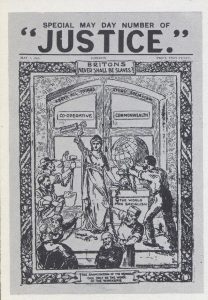 “Their agenda is to obtain the conquest of the gentile world!”—Mariatu Conteh, Labour Party activist

There is a long and healthy tradition of skepticism and suspicion about the true motivations and intentions of the organized Jewish community within Britain’s labor movement. Indeed, during English socialism’s formative years, Jews were often equated with exploitative capitalism.

Justice, the paper of the Social Democratic Federation, on the 5th April 1884, read: “Jew money lenders now control every foreign office in Europe” and the same publication on the 25th June 1898 featured an article that argued “It seems to be an open secret that the government of France is too much in the grip of the Jews to take active measures against them as a body.” Robert Blatchford’s The Clarion reporting on the 24th February 1900: “Modern imperialism is really run by half a dozen finance houses, many of them Jewish, to whom politics is a courtier in the game of buying and selling securities and people are convenient pawns.”

It was also frequently alleged during this period that Britain’s Imperialist Wars, particularly the Boer Wars, favored the Jewish interest. The Independent Labour Party publishing in December 1891 opinions like: “Whenever there is trouble in Europe, whenever rumours of war circulate and men’s minds are distraught with fear of change and calamity, you may be sure that a hook-nosed Rothschild is at his games somewhere near the region of disturbances.” Similar views that H.M. Hyndman, the leader of the Social Democratic Federation warned against in Justice on the 25th April 1896 when he spoke of an “Anglo-Hebraic Empire in Africa.” Justice’s sister publication The Clarion claiming in 1903 that Jewish immigrants were “A poison injected into the national veins.” Other contributors going on to say “They were the unsavoury children of the ghetto” and commenting that “their numbers are appalling.”

At a Trade Union Congress in Cardiff in the early 1900s a range of anti-alien resolutions were passed and an Independent Labour Party article entitled: “The Problem of Alien Immigration” was widely promulgated which featured statements such as: “The rich Jew has done his best to besmirch the fair name of England and to corrupt the sweetness of our national life and character.” Even Beatrice Potter, one of the founders of the Fabians wrote: “The love of profit distinct from other forms of money earning is the strongest impelling nature of the Jewish race.” A piece in the Nineteenth Century, Volume XXIV, proclaiming: “They have neither the desire nor the capacity for labour.” With one Bill Tillet writing in the London Evening News in June 1896: “Our leading statesmen do not care to offend the great banking houses or money kings . . . For heaven’s sake, give us back our own countrymen and take us from your motley multitude!” While a gentleman going by the name of Tranter of The Progress Union of Cabinet Makers at the TUC Conference in 1900, supported by John Ward of the Navvies Union, asserted that: “Practically £100,000 of the tax payers money has been spent in trying to secure the gold fields of South Africa for cosmopolitan Jews, most of whom had no patriotism and no country.”

The litany of concerns running on in an essay entitled “Foreign Pauper Immigration” published in A. White’s The Destitute Alien of Great Britain, where it was stated the Jews sought “to strengthen the spirit of discontent and disorder on which the agitators live and batten and which in time they knew would pollute with violence our continental socialism.” An insight complemented by a “A Mile End Socialist” writing to the Jewish Chronicle on the 21st November 1902, “Jew versus gentile will be my battle cry at every election as long as life is spared . . . The Jew has made himself obnoxious through the incarnate instinct of his race to every nation where he has now emigrated. This is an historical fact and beyond controversy.”

Antipathy that was to manifest itself in anti-Jewish riots across the South Wales valley communities of Monmouthshire and Glamorgan, the very heartland of the Labour movement right up to modern times, in late August 1911. Described by Winston Churchill as a “pogrom,” the disturbances started in Tredegar and spread rapidly to Ebbw Vale and Rhymney. With people who were originally described as of the “hooligan class” but were later found to be respectable working people at a hearing at Tredegar Magistrate’s Court in September 1911, indulging in a week-long attack on small-time Jewish capitalists, shopkeepers, pawnbrokers, and landlords, who they believed to be running price-fixing cartels and imposing usury at exorbitant rates.

The Daily News reporting that, “the cry of the mob was one long denunciation of Jews” and the view of the presiding magistrate at Tredegar was that “the first disturbances were no doubt anti-Jewish.” While the chief Constable of Monmouth, who had required the support of detachments from the Worcester Regiment to calm the situation, claimed in his report to the Home Office that there seemed to be a “determination expressed by the inhabitants of Tredegar to get rid of the Jews.”

A bitter period of inter-ethnic strife that is now represented by schmaltzy films like Solomon and Gaenor (1999). A Yiddish and Welsh language co-production starring Iaonn Gruffudd and Nia Roberts, about a Welsh girl who falls in love with a Jewish boy whose family, the Levinskys, are caught up in the troubles. The movie, like the events themselves, showing the strong under-currents running through much of early socialist thinking, which have now, over a century later under Corbyn, resurfaced with similarly strong sentiments. A situation exacerbated by his own deliberate inclusion of a cadre of fundamentalist Muslims and other ethnic groups at all levels within his hard-Left Momentum movement. Leading to the hue and cry from characters like Margaret Hodge, Luciana Berger, Louise Ellman and Ruth Smeeth, who see the decades-long Jewish fiscal and ideological grip on the party by people like David and Ed Miliband, Peter Mandelson, Gerald Kaufman, Lord Levy, Alexander Bernstein, and Robert Gavron, coming under threat.

A concern that carries a kernel of truth, when Labour Party members and activists like Alan Williams are saying: “Check the names of the banks involved in the 2008 crash. They are not helping themselves”; Mohammed Pappu, a Councillor in Tower Hamlets claiming that Britain attacked Syria to “install a Rothschild Bank”; Catherine Love-Madden, Labour Party member from Rochester, pointing out that “Jews are rich, interested in finance and want to control or exploit others”; ardent Corbynista, David Barron, from Stafford arguing “In terms of stopping being taken over, you are too late. We’re run at the highest levels by Jews”; David Cooper, a party supporter in Eastwood in Nottingham stressing “the Jew is worse than Black Death . . . We need to eliminate this infection”; and David Ray, a veteran party member from Leicester, who hits the nail on the head when he writes “Zionists are basically psychopaths and should be treated as such.” Adding in an e-mail “that Britain’s financial struggles in the 1970s had given the Jewish gang power out of all proportion to their representation as a proportion of the population” and that “Kinnock sucked up to them because of the financial incentives and Blair followed on avidly supporting a bunch of Zionist scumbags.”

Unpalatable language perhaps, but no more unpalatable than the fact that over seven hundred parliamentary candidates in the UK including Conservative Prime Minister Boris Johnson and Liberal Democrat Party Leader, Jo Swinson, have all signed up to support the new definition of anti-Semitism, as proposed by the Holocaust Remembrance Alliance, which states:

Antisemitism is a certain perception of Jews, which may be expressed as hatred toward Jews. Rhetorical and physical manifestations of antisemitism are directed toward Jewish or non-Jewish individuals and/or their property, toward Jewish community institutions and religious facilities.

An ambiguous and all-inclusive catch-all definition that gives real credence (especially when there are attempts by some to include condemnation of the ethnic-state of Israel within its appendices) to arguments that it is a contrivance to silence all criticism of Jewish group or individual malfeasance and the ongoing human rights abuses and atrocities of an illegal state founded through the ethnic cleansing, rape, and murder of many thousands of Palestinians and acts of terrorism against British soldiers in 1948.

The whipping up of such hysteria about anti-Semitism in the world’s media bringing to the for accusations previously leveled at the Jewish community in The Protocols of the Elders of Zion and forcing the hand of their placed-men such President Emmanuel Macron of France to say “Jews are and what makes France.” The Rothschild’s rent-boy going on “That for too long many have used the excuse that their obsessive criticism of Israel is not hiding their anti-Semitism . . . Those who attack them, even their graves, are not worthy of the idea we have of France.”

This, only hours before French MPs agreed to equate anti-Zionism with anti-Semitism and set up a new Commissariat to deal with anti-Jewish hate crimes. Interior Minister Christophe Castaner making the over-blown statement after he visited the alleged crime scene of swastikas daubed on Jewish graves in Westhoffen, that “The Republic itself had been desecrated.”

Which takes me back to Mariatu Conteh’s belief at the top of this article and the themes that have informed much of non-Marxist and non-Trotskyite socialist thinking for a century. Notions that have now even been embraced by former Baader-Meinhof and Red Army Faction members like Horst Mahler, who, like most of the 1960s and early 1970s radical West German Left, became increasingly less sympathetic to Israel after the Six-Day War in 1967, and has himself been condemned, in his later right-wing philosophical incarnation, by the far-reaching German Volksverhetzung Law of 2004, relating to Holocaust denial.

A situation that is set to be repeated over and over again all over the developed world with the attempted imposition of legislation like the American Congress’s Anti-Semitism Awareness Act of March 2019, which only confirms that the clue to those who have improper power and influence over the governmental apparatus, the judiciary, the economy, finance, and the news corporations providing information through their controlled outlets, are the very ones you are not under any circumstances, even under pain of imprisonment, allowed to arraign or denounce in any way, shape, or form. The self-censorship of investigative journalists and news black-out surrounding internationally renowned pedophile and sex trafficker Jeffrey Epstein and his procuress, Ghislaine Maxwell, having suspected links to Israeli Intelligence speaks volumes and is just the latest example of this criminal fraternity’s machinations to impose their racial will and animus in a globalist-controlled future.