Welcome to the Capitol Hill Polycule 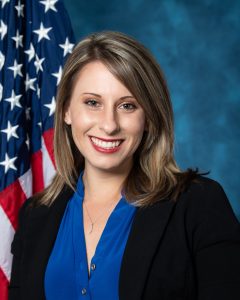 What would politics be without sex scandals? Everyone knows lawmakers often engage in lurid affairs and try to keep their private lives out of the public eye. When they get caught, it’s front-page news and red meat for late-night comedy.

The latest political sex scandal is different from the past ones, however. It doesn’t feature a powerful man frequenting high-end hookers or jet-setting off with a hot young staffer. In the Katie Hill drama, the woman is the offender, even though the press is claiming that she was the real victim. It also involves “polyamory,” a practice no Cold War-era politician would ever proudly engage in. Polyamory is the new thing for the liberal elites; unsurprisingly, stunning and brave female politicians engage in it.

The Katie Hill affair represents the sex scandal of the future. It’s no longer played for titillation in the press; rather, it’s treated as a major breach of privacy or as an empowering story of female sexuality. The sex scandals become stranger as the elite increasingly adopt polyamory and other bizarre practices. Women now play the offender, as they can attain positions of power this way. The media and their allies are more than willing to accept their lies and obfuscation, as opposed to those of their conservative male colleagues. Journalists always defend their team.

Katie Hill, who resigned last month, touted herself as the ultimate millennial politician. The California Congresswoman campaigned with a VICE film crew following her around, showing her doing yoga in between calling up donors. It’s the kind of fawning coverage reserved for those who embody journo values. She proudly advertised her bisexuality, and her election was seen as a huge victory for the LGBT cause. Reporters didn’t bother to ask how she remains bisexual while being married to a man. Politically, Hill is relatively moderate – by today’s standards, at least. She believes America should retain a border, and she was happy to work with Republicans.

Her sex scandal turned her into a martyr. The conservative blog RedState first reported that Hill was sleeping with staffers, both male and female. New Congressional ethics rules prohibit relationships between lawmakers and staffers. Oddly enough, these rules were adopted in the wake of #MeToo – and the first one to fall under its purview was a politician who championed #MeToo.

At first, Hill only admitted to sleeping with a female campaign aide, but not a male Congressional staffer. She also blamed her “abusive” husband for the story, and claimed that she is the victim. The Daily Mail soon published nude photos of Hill and provided more evidence of her lurid affairs. She and her husband were polyamorous, and Hill was consensually advertised on wife-sharing sites. Her husband once posted a thread asking, “Would you fuck my wife?” The Daily Mail also incredulously said Hill had a “Nazi-era tattoo” near her vagina. The photos show it be some sort of Maltese cross, and not a “Nazi symbol.”

Hill issued a cease and desist order to the Daily Mail, but the damage was done. A day after the story was published, she announced her resignation. Her speech received media acclaim for its victim posturing and for Hill’s attacks on unfair standards. She delivered her speech as she was casting her vote in favor of impeachment proceedings against President Trump. In it, she said:

I am leaving because of a misogynistic culture that gleefully consumed my naked pictures, capitalized on my sexuality, and enabled my abusive ex to continue that abuse, this time with the entire country watching. The forces of revenge by a bitter jealous man, cyber exploitation and sexual shaming that target our gender and a large segment of society that fears and hates powerful women have combined to push a young woman out of power and say that she doesn’t belong here.

Hill then congratulated herself for standing strong, and exhorted others like her to run for office “I came here to give a voice to the unheard in the halls of power,” she continued. “I wanted to show young people, queer people, working people, imperfect people that they belong here, because this is the people’s house.”

She received the support of the “Squad,” the media moniker for four non-white Congresswomen which includes Alexandria Ocasio-Cortez and Ilhan Omar.

Interestingly enough, Omar has her own sex scandal ongoing: The hijab-wearing Somali has been credibly accused of homewrecking a white couple’s marriage. The jilted wife claims Omar started an affair with her husband, who is a Democratic consultant, Tim Mynett, and that it destroyed her marriage. The Minnesota Congresswoman has been spotted out in public several times with her new fling. She also recently filed for divorce from her current husband.

Omar has dismissed these claims as lies. She similarly claimed that the credible allegations that she married her brother to commit immigration fraud is a lie. Unsurprisingly, both stories have only been covered by conservative media. The marriage allegation is derided as a fever swamp conspiracy theory by liberal journalists, even though there is a mountain of evidence for it.

Despite the fact that her alleged lover did consulting work for her campaign, Omar likely didn’t violate any ethics laws with her affair. It’s unlikely she will face consequences for it, and may even be able to brag about it down the road. This is a strong, empowered Muslim woman taking what she wants – lean in! It’s even funnier given that the woman she cucked is the archetypal affluent white female liberal – yet the media ignores her. Omar outranks her in the Left’s hierarchy.

Hill would probably have survived her sex scandal if it hadn’t been subordinates she was sleeping with. If no rules were violated, the media would have lionized her as a progressive sex icon and a victim of the patriarchy. Who’s to tell this empowered woman she can’t sleep with whoever she wants?

There is a double standard afoot, and it’s not in men’s favor. Plenty of male politicians have suffered far worse fates than Ms. Hill in the press due to their sexual forays. Anthony Weiner’s first sex scandal involved him sending nude photos to women. This was played for maximum laughs in the press, and he ultimately resigned over it. Former South Carolina Governor Mark Sanford, who’s now a Never Trump presidential candidate, had to resign from his office in 2009 over an affair. And former President Bill Clinton was infamously impeached for his false statements about his affair with Monica Lewinsky. The list goes on and on. If a woman were in these situations, suggesting she should resign would be depicted as the crime of the century – and she would be depicted as the victim. Thus, it’s laughable to think that Omar will suffer any consequences for her wrongdoing.

A further instance of the double standard is the lack of consequences for female reporters caught sleeping with sources. New York Times national security reporter Ali Watkins was revealed in 2018 to have slept with a Senate intelligence aide for scoops. She was demoted, but not fired – and the press portrayed her as a victim of the Trump administration’s tyranny. (It was apparently wrong to seize her communications to investigate criminal activities.) The aide she slept with pled guilty to lying to the FBI.

Last month, CNBC reporter Amanda Macias was revealed to have received classified information from a Defense Intelligence Agency (DIA) staffer she slept with. The DIA staffer faces several years in jail if he’s found guilty. Macias still works at CNBC and suffered virtually no criticism from her fellow journalists. The elite say it’s okay for women to sleep with their sources, even when those sources commit crimes in the process.

It’s odd that this behavior would be tolerated in the #MeToo age. #MeToo was supposed to make workplaces safer and more professional by excising sexual relations. It held that it was an abuse of power for a man in a position of authority to sleep with or hit on an employee. But now that women are the ones abusing their power, it’s not seen as particularly significant.

Most readers probably already know that #MeToo is not about reforming “sexual inequality”; it’s about gaining power and emasculating men. Women decide what is an infraction. The dorky guy in IT complimenting a woman on her dress? That’s sexual harassment. The female boss demanding oral sex from her male employee? That’s empowerment! #MeToo simply advances female power and does nothing to end sexual harassment. Nowadays, men need to be worried about anything that could be interpreted as impropriety, while women are encouraged to be sexual predators. Steve Bannon was right to say that this “anti-patriarchy movement is going to undo ten thousand years of recorded history.”

The mainstreaming of polyamory also fits in with this agenda, even though it has received little mainstream media attention previously. But recently, the New York Times seemingly publishes a feature about this sexual practice every month. Polyamory is not being promoted to give men more sexual partners; it’s celebrated because it frees women to maximize their body count guilt-free. Cuckoldery obviously doesn’t play well, so it’s better to rebrand it as an “open relationship.” The New York Times’ August feature on polyamory portrayed it as a powerful weapon to subvert “repression” and praised it for its “sharing” spirit. It made sure to describe a beta male partner who accepts raising his wife’s kids that she had by another man. (“My wife’s son” is not a meme; it’s reality.) Quartz recently championed polyamory as “the most quietly revolutionary political weapon in the United States” for the same reasons America’s paper of record praised it.

Anytime a feature on polyamory is published, you can automatically assume the traits of the people involved. The typical setup is a dopey beta male who encourages his affluent white liberal female partner to “explore her sexuality” with much higher-T men. Read an article about polyamory, and the Last Man stares back at you. The Katie Hill affair conformed to this model, with the wife taking multiple partners and the husband not only tolerating but enjoying the sharing of his wife. But natural human emotions got in the way, and her husband launched a scorched-earth campaign of revenge.

Polyamory is the perfect relationship model for affluent whites because it puts the focus on unlimited sexual pleasure rather than building a family. It doesn’t live up to the sexy model its practitioners make it out to be. It’s just banal and gross. Anyone who’s seen the Katie Hill leaks can testify to that.

America can expect more misadventures from the Capitol Hill polycule. Female candidates are eager to proclaim their sexuality in a way no male politician would have. We’ll see stories of this “boss bitch Congresswoman” with multiple boyfriends. The female politician caught having an affair will use the media to demonize her cuckolded husband as an abuser and misogynist. We might even see a change in the rules where female legislators are excluded from the prohibition on relationships between lawmakers and staff. After all, they need to explore their sexuality to defy the patriarchy! To deny them this right is unjust.

This sexual revolution won’t produce more kids (Hill herself has zero), but it will temporarily satisfy female desires. Who needs kids when you have a polycule?