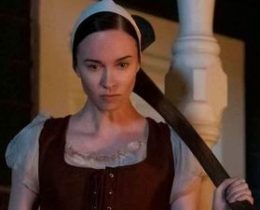 The single greatest – but largely unmentioned and unstudied – ethnic conflict in America is that between Yankees and Jews.[1] [2] In this case, the term Yankee is used in the stricter sense, i.e. to refer to the descendants of those Englishmen (mostly from East Anglia) who originally settled in New England, as well as those European immigrants they assimilated (such as Joseph Kennedy, Sr.) – rather than in the British sense, where it refers to all Americans, or the Southern, where it refers to anyone from the northern US. With the Jew/Yankee conflict in mind, it was only a matter of time before the ultimate Yankee holiday, Thanksgiving, became the subject of a Jewish metapolitical attack.[2] [3]

I am referring to “Pilgrim,” a 2019 episode of Hulu’s Into the Dark [4] series. Before getting too deeply into this, I want to mention that if you like dumb B-movies with extremely stupid, and yet funny in a lowbrow sort of way, plots, this episode will tickle you. Indeed, if there were B-movie-level horror films that were both funny and dumb titled Rosh Hosanna (featuring a creepy, supernatural rabbi killing half-dressed coeds) or Purim: Haman’s Revenge, there wouldn’t be a reason for an article on something as funny (yet bad) as “Pilgrim.” However, Jewish film producers never profane Jewish holidays, and this film does fit into the Yankees vs. Jews ethnic conflict pattern.

The Jewishness of the film can be observed by the fact that it is produced by Blumhouse Productions, and the story is written by one Noah Feinberg. “Pilgrim” is inspired by an Eli Roth (Jewish) fake movie trailer called Thanksgiving that spoofs the Friday the 13th horror movies. The Jewish War against Thanksgiving also matches the pattern established by their War against Christmas. One can read about the Jewish hostility towards Christmas on film, which has been documented here [5], and towards Christmas in general as documented here [6] and here [7]. 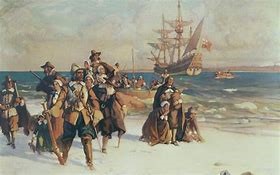 [1] [9] To personalize this conflict, consider: During the 1860s until 1900, General Grant, William Lloyd Garrison, and anti-pornography activist Anthony Comstock were all Yankees who carried out counter-Semitic actions. From 1900 until the 1950s, Madison Grant, Lothrop Stoddard, Henry Fairfield Osborne, and Douglas MacArthur (all Yankees), as well as assimilated Yankees such as Joe Kennedy, Sr., Charles A. Lindberg, and Joseph McCarthy were counter-Semitic in some way. In the 1960s, the most prominent white advocate was George Lincoln Rockwell (Yankee). In times closer to our own, Yankee president George H. W. Bush, while not a staunch counter-Semite, did seek to cut down on Israeli excesses and sought to reform the credit card industry. He was vigorously opposed by the organized Jewish community and failed to win a second term.

[2] [10] I must also mention other attacks in November 2019 aside from the one under discussion. Consider that a bunch of Jews are leading the “impeachment” against President Trump. This impeachment is even facilitated by low-level Jewish functionaries in the US government such as LTC Vindman (Jewish, not Ukrainian). Meanwhile, Counter-Currents has had more of its books removed from Amazon and has been restricted from taking credit card payments. We have also had the murder of Bahaa Abu el-Atta, a Palestinian activist, and his wife during an Israeli airstrike. The scale of this is staggering. No perceived anti-Jewish threat is left unmolested.