The Paid Piper of Conservatism Inc. 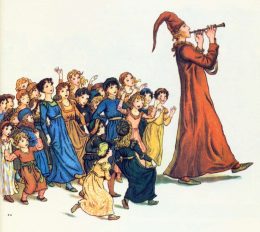 He advanced to the council-table:
And, “Please your honors,” said he, “I’m able,
By means of a secret charm, to draw
All creatures living beneath the sun,
That creep or swim or fly or run,
After me so as you never saw!
And I chiefly use my charm
On creatures that do people harm,
The mole and toad and newt and viper;
And people call me the Pied Piper.”
–The Pied Piper of Hamelin

It is a weakness of human nature that we naïvely trust the motives of our supposed betters. Most people never question the superficial ideas of all those politicians and talking heads they see on television, or just how and why those people came to be politicians or talking heads in the first place. If we were more perceptive creatures, we might give pause to the notion of some random 18-year-old college kid, who seemingly through perseverance, ardor, and an infectious personality, against all odds and cultural undercurrents, organically establishing a nationwide youth movement for “campus conservatives.” Unfortunately, most people lack the critical thinking ability to lift even the lightest of stones in order to peer deeper into the machinations of our political system.

Such is the case with young Charlie Kirk and his “Turning Point USA” (TPUSA) project. Often the truth is hidden in plain sight, and indeed, the facts surrounding the establishment of TPUSA are no secret. Right on their Wikipedia page they reveal how our boy Chucky became a rising star in Conservatism Inc.:

Charlie Kirk founded Turning Point USA in 2012, when he was 18 years old. At the 2012 Republican National Convention, Kirk met Foster Friess, a prominent Republican donor, and persuaded him to finance the organization.

Not bad, Charlie. Not bad at all. They didn’t elaborate on the financial details of the Friess investment, but one can surmise that Charlie didnʼt have to sell candy bars or plate lunches at a church fundraiser to help scrape the funding together. “Hey bro, there isnʼt anything inherently sinister about a rich guy funding a start-up enterprise, you know.” Very true! Iʼm absolutely certain that even Counter- Currents would be ecstatic if a billionaire benefactor donated a fortune to their cause. The issue here is not where the money came from, it’s why that money came Charlie Kirkʼs way in the first place (in wheelbarrows, no doubt), and under what stipulations that money was fronted.

I was not there when Charlie made his 18-year-old, pimple-faced sales pitch to Mr. Friess, but I think it is fair to assume that Friess wasnʼt in the business of donating his money to causes that run afoul of his own interests. And to that end, clear as day, TPUSA has a mission statement right there on their Websiteʼs front page, which Iʼm certain aligns quite nicely with Mr Friess’. Here it is:

Turning Point USA is a 501(c)(3) non-profit organization founded in 2012 by Charlie Kirk. The organizationʼs mission is to identify, educate, train, and organize students to promote the principles of fiscal responsibility, free markets, and limited government.

Boilerplate Reaganite Republicanism. Look, Iʼll be the first to say that our government should strive to be fiscally responsible, and that our bloated federal bureaucracy is weighing us down. Certainly, Iʼm not a proponent of state ownership of the means of production, either. But pure Marxism is basically a dying, extremely unpopular idea. Yes, there are still Communists at all levels of our society, but most of them are elitists in academia or gated community-dwellers who would never give up their morning Starbucks latte. Itʼs all fake and gay.

Regardless of the milquetoast message, it is extremely relevant to understand their mission statement, and to recognize the underlying – and perhaps more urgent – mission that is omitted from it. To do that, we must rewind our minds to circa 2012, when young Charles had this unique, radical vision about fiscal responsibility. It was an election year, and all the youth energy seemed to be flowing into supporting Barack Obama’s campaign for a second term. The economy, while sluggish, was recovering from a devastating recession that seemed to have been caused by those coveted “free markets.” Ron Paul libertarianism had a pretty good ideological grip on a sizable segment of Right-leaning young white men, but the mantle of mainstream conservatism was being carried by a very unpopular Mitt Romney, a candidate who ultimately failed to defeat Obama in no small part due to his unwavering support for Israel as well as unlimited military adventurism (not to mention fiscal responsibility and smaller governments).

It must have been frustrating for Conservatism Inc. to see so many young people disinterested in the GDP. Something had to be done. In walks Charlie Kirk for his date with destiny!

It really is that simple. In 2012, the Republican Party was scrambling to redefine itself, but ended up falling back on the same old trappings from the 1980s. They needed young, radical thinkers to circumvent the specter of socialism that seemed to lurk behind every Amazon shipment and PayPal transaction. The GOP realized that it needed a bona fide Pied Piper to lead the college debt-laden American youth back to the promised land of low taxes and budget surpluses. Consequently, they also realized that the Democrats had a monopoly on the new wave of gay identity politics. As unthinkable as identity politics are to “true conservative” Christians, it had become all too clear by this point that the Republican Party needed more homoeroticism and fewer white men. Perhaps they knew that “demographics are destiny” after all!

But then, only a few short years later, it got interesting. To be honest, I had never heard of either Charlie Kirk or TPUSA until Donald Trump came to dominate the Republican Party in 2015-16. It might even be a surprise to some readers to know that Charlie Kirk supported Ted Cruz in the 2016 primaries. Is it possible that Charlie Kirk decided to become one of the so-called “grifters” who latched onto MAGA late in the game for his own gain? Honestly, thatʼs a pretty cold take. Remember, Charlie

Kirk is more akin to the aforementioned Pied Piper of Hamelin than he is to Laura Loomer or Gavin McInnes. At least those two characters arenʼt risk averse, and their gaffes have been purely of their own design. Charlie literally has been ordained with a mission, and his funding is dependent upon the wishes of the donor class.

Then 2017 happened, and the urgency behind Charlie Kirkʼs mission reached a crescendo. Young, white men were eschewing the siren song of capital gains and sound investments in droves in favor of fighting Left-wing identity politics with populism and nationalism. Oh boy, Charlieʼs finest hour was within reach! With flute in hand and reed to mouth, Charlie began to play a different tune, one that championed immigration (so long as it is legal, of course) and globalized gayness for the masses, all in the name of one Donald Trump and MAGA.

Some in our ranks hold very cynical views about Donald Trump. As for myself, I still believe that Trump was an ideal populist candidate, if for no other reason than that his seeming imperviousness to the influence of the donor class as a result of his own personal wealth. Sadly, I believe that the Donald Trump of 2019 is the victim of his own closeted skeletons and corrupt dealings in the private sector. No matter how you slice it, money is the root of all evil, and it eventually caught up with Trump. Conservatism Inc. reigned him in, there is no doubt. And if they were smart, they  convinced Trump that his current watered-down position is entirely of his own design.

He was always about black unemployment first and foremost, and the plight of gay Somalians was always a pillar of his platform. If theyʼve harnessed his narcissism for their own gain, then Trump is a lost cause.

But the message Trump injected into the ether about mass immigration isnʼt going to go away, and with each Boomer funeral, we are one step closer to ending the fetishization of giving HB-1 visas to prospective Google and Facebook employees.

Charlie Kirkʼs flute wonʼt stop the fire that keeps spreading. Stay tuned to the groyper campaign to see what is in store. It has just gotten started.