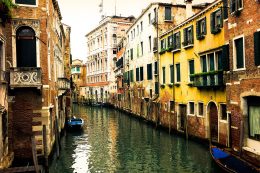 “Time is water and the Venetians conquered both by building a city on water, and framed time with their canals. Or tamed time. Or fenced it in. Or caged it.” The city’s engineers and architects were “magicians” and “the wisest of men who figured out how to subdue the sea in order to subdue time.”
— Joseph Brodsky (1940-1996)

Replicating the lyrical beauty and wanderlust of the Jewish journalist Joseph Roth, another “outsider” and co-religionist, the Nobel laureate poet Joseph Brodsky succeeds in perfectly capturing the elusive and almost mesmeric magic of Venice in his seductive prose masterpiece, Watermark (1974).

A reviewer in Publisher’s Weekly wrote:

Praising Venice and its architecture as a triumph of the visual, the Nobel laureate uses his visits there as a touchstone to meditate on life’s unpredictability, and on the appetite for beauty, death, myth, and modern art . . . In his wayward forays amid canals, streets, and cathedrals barnacled with saints, the eternal Venice shimmers through the fog, battered yet resplendent.

Given recent events, battered is the right word. With heavy rain and a full Moon combining with a pivoting flux called a seiche just off the low Adriatic coastline, a 1.87-meter Sirocco surge was raised in the Punta della Salute. This caused what Venetians call la Colma or l’acqua alta – flooding through the Porti – to cover eighty-five percent of the city center. This has swamped countless historic treasures such as eleventh-century mosaics , historic treasures like the sixteenth-century Christ Pantocrator, and artifacts made from twelve types of rare marble, and swept banana-shaped gondolas up onto the steps of Saint Mark’s basilica.

The water has risen far above the level that is meant to set off emergency sirens in the streets. Mud and gravel are scouring the stonework of Brodksy’s “version of paradise”: “This Penelope of a city, weaving her patterns by day and undoing them by night, with no Ulysses in sight. Only the sea.”

With the suddenness of the Old Testament’s God, a sea’s wrath had wreaked vengeance and come to lay claim once again to the city, besieging the palazzos and statues and clutching at its pillars with green seaweed-stained fingers, driving away tourists and trapping locals on the balconies of the Palazzo Gradenigo, now festooned with the detritus of a swelling lagoon.

This was a national disaster that the long-awaited flood barrier nicknamed Moses might possibly have prevented. It followed so rapidly in the wake of the fire that destroyed Notre Dame in Paris that one could almost be forgiven for thinking that it was a sign of Gaia’s displeasure; perhaps a condemnation of how man is treating the planet in a Sodom and Gomorrah for modern times. Perhaps it justifies Pope Francis’s suggestion to introduce a new catechism into the Catholic Church: “The sin against ecology, the sin against our common home, because it’s our duty!”

But it is far worse than that. The stink of rot and the tingle of crystalline salty damp that gets into your very bones has caused a cultural arthritis that has warped Venice’s white Istrian stone exoskeleton and bloomed like a red-rose rash of acne across the colored marble of the Palazzo Ducale. The city’s 118 islands and 150 canals, originally perched upon four-meter pilings plunged deep into the sandy marshlands of Torcello, Iesolo ,and Malamocco in the fifth century AD – culminating in over a million stakes, harvested from forests as far away as Slovenia, Croatia and Montenegro, supporting the Santa Maria Della Salute church – were already teetering on the brink of desecration. It is a sort of decadent decay perfectly symbolized by works such as the elusive and anonymous Instagram artist Banksy’s drawing of a migrant child wearing a life-jacket and holding a neon pink flare appearing on a wall near the Campo San Pantalon.  This could be seen as a visceral celebration of Venice as a “sanctuary city,” as it was declared after the Emergenza Program, which was explained so eloquently by Deputy Mayor Beppe Caccia back in 2004: “As a refugee management strategy, it was always intended to be long term and forward-thinking. The goal was to help these people integrate into society.”

This is an approach that has resulted in subsequent so-called humanitarian activities like the Fontego Project, as well as the opening up of an Exiles Café and the Mostra del Cinema. The Leftist authorities are abusing the history and traditions of welcoming travelers and providing lodgings for merchants and traders by giving over a thirteenth-century building to immigrants and asylum-seekers. This rather puts pay to Brodsky’s paean to the city he thinks of as Eden, when he wrote, “Venice is the greatest masterpiece our species produced . . . part damp oxygen, part coffee and prayers.” He describes canal-side house façades as “upright lace.”

Brodsky has written so poetically of the winter light pouring over the lagoon: “And the city lingers in it, savoring its touch, the caress of the infinity whence it came.” Nevertheless, the ghosts of Ezra Pound and Olga Rudge have long since drifted away along the mist-filled cobbled passageways behind the down-at-heel trattorias, where small tables are still pushed together to form a long rectangle for the diners to enjoy bigoli in salsa.

Likewise, the shadows cast upon the face of the Doges’ Palace or the pink of the Piazza San Marco are no longer those of the descendants of people like Giuseppe Volpi, Mussolini’s appointee as President of the Venice Biennale, or indeed the organizers of the Festival of Light and Festival of the Sea, but rather the long lines of refugees. They are the beneficiaries of the Italian government’s recently reinstigated Mare Nostrum, Operation Triton, and Operation Themis policies of “rescuing” poor and needy African souls from the Mediterranean. Such people are less interested in the whereabouts of Bellini’s famous painting Madonna and Child than clawing their way through society with the help of Soros’ “no borders” activists. Rome’s Frontex reception centers offer them 150 million euros, which represented nearly nine million euros a month at the height of the Mare Nostrum campaign in 2013/2014. And as Guiseppe Bonnano Conti, leader of Catania’s Forza Nuova, says, in a direct challenge to the rigid anti-racist hate speech Mancino Law, “They already spend so much when Italian people are killing themselves because of economic problems . . . These criminals take our money in taxes and use it to help migrants. They are destroying our country!”

And what a country that is: a nation that birthed Venice in 400 AD following the collapse of the Western Roman Empire. It was a city-state that the English nineteenth-century art critic John Ruskin called “a vast illuminated missal, bound with alabaster instead of parchment,” where Guido d’Arezzo invented the musical scale, where the bells atop the Torre dell ‘Orologio have chimed since 1494, and the domes and campanili of San Giorgio Maggiore stand aloof over the Canale di San Marco.

It is a citadel that has withstood earthquakes and flooding since at least the thirteenth century, when such records began. In September 1240, scribes recorded, “The water rose to the height of a man in the streets” and “Many were drowned inside their houses or died of cold” in December 1280. More reliable recent accounts indicate that Venice has flooded over forty times between 1917 and 1967.

These statistics clearly frighten the elderly procuratore of St. Mark’s, Carlo Alberto Tesserin, who wept openly when he said that it was unbelievable to think the basilica might not have a future, and Bergamo Rossi, Director of the Venetian Heritage Foundation, warned that “[in] twenty years it will be over. It’s like the end of the Roman Empire, when they were unable to act and the barbarians came.”

But it is not simply the climate and rising sea levels that threaten Venice – the passing “from one realm of water to another,” as Brodsky opines. The city is a microcosm of the fate of the West. It is a modern-day parable: a center of unbridled beauty and sophistication choking itself on a self-righteous crusade to assist an endless stream of humanity sweeping in from the south and east. These creatures’ sooty feet are already dancing on Brodsky’s grave in the Protestant section of the Cimitero San Michele. As Lothrop Stoddard predicted in his seminal work, The Rising Tide of Color Against White World Supremacy (1920):

The white world was tearing itself to pieces. White solidarity was riven and shattered. And fear of white power and respect for white civilization together dropped away like garments outworn.

« The Paid Piper of Conservatism Inc.