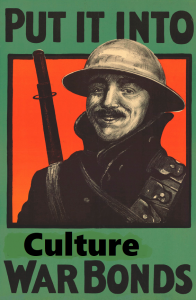 Our goal this year is to raise $100,000 in order to expand our efforts to build a metapolitical vanguard for White Nationalism. So far, we have received 288 donations totaling $60,338.79. We set our goals high because the task we have before us is formidable, but with your help, we will succeed. We want to thank everyone who has supported us so far. Please note that we are now again able to receive recurring donations and donations from credit cards outside the US.

The subject of personal finance doesn’t come up very often on the Dissident Right. But one subject that does come up quite a bit is time preference. One of the defining characteristics of the white race – one of our killer apps that sets us apart from the savage brown hordes – is our famously low time preference. We have an ability to think in the long term and not go for the quick and easy dopamine rush.

Whereas people of color will get their paychecks and squander it all on a weekend of hookers and blow only to be flat broke by Monday morning, white people will use that money to educate themselves and perhaps even start their own businesses; then they will work hard so that by the time they are 65, they can retire and spend their remaining years doing hookers and blow every day. That’s time preference.

And yet so many on the Dissident Right have an incredibly low time preference when it comes to their own money. They say, “I don’t want to donate to my favorite content creators. I just wanna consume their content for free. You don’t understand! I need those 700 premium movie channels. I mean, I usually only ever watch three of them, but I need those other 697 just in case something comes on one that I want to watch.”

Gentile, please, Turner Classic comes with basic cable, and that’s the only movie channel you need. At least those movies had to get past Christian censor boards.

Ask yourself: Do you really believe the White Nationalist victory is inevitable? Because imagine the financial cost you’ll pay should we fail: reparations upon reparations, ever higher taxes to feed the useless mouths that have been made redundant by automation, the extra gas money needed for the longer and longer commutes to work as the cultural vibrancy spills ever further out into the suburbs . . .

Imagine a world where its drag queen everything. And on your dime! Your children – those you count on to support you in old age if all else fails – will be facing more affirmative action and progressive stacking. Their prospects will be handed off to hostile foreigners. And while it may be true that by then, your precious satellite TV will feature at least 2,000 channels, it will be 2,000 channels of seething anti-whiteness (only 300 of which will be in English). There will be no escape.

“But Trav,” you say, “what good could my paltry donation do when you are going up against the bottomless wealth of Hollywood and the multi-billion-dollar Left-wing media establishment? It couldn’t possibly affect the outcome!”

Look. The only reason why the Left needs so much money is because what they are selling sucks. The shittier the product, the more money you have to dump into advertising it to make people want to buy it. We don’t need as much money as the Left does because what we’re selling doesn’t suck. But we do need some money. More specifically, we need your money. Because your money is special. Your money is magic. Your money has been touched by the hand of God. No one else’s money will do. It has to be yours. And if we lose, it will be all your fault.

So don’t be a negro, white man! Donate to your favorite White Nationalist content creator. Donate to Counter-Currents. Think not of the lost appetizers and those drink specials that might have been. Think of all the reparations, welfare cases, Zionist wars for Greater Israel, and drag queen P.E. teachers you won’t be paying for tomorrow.

Forget time preference. Time itself is a very important concept to the Dissident Right, as it is something the white race is rapidly running out of. If the white race is to be saved, people need to start waking up now.