I remember being fascinated by an episode of the TV series Taxi as a kid. It was the one which offers the origin story of the frazzled, drug-addled cabbie Jim Ignatowski, who was memorably played by Christopher Lloyd. Even at such a young age, I was aware of hippies, drugs, and their prominence in the 1960s. This meant I was sophisticated enough to find the Jim character amusing as he stumbled and mumbled around the Sunshine Cab Company in a narcotic-induced haze. Part of the allure was that Jim appeared this way fully-formed and without explanation, sort of like a demented son of a drunken Zeus. He was not so much a real person but a harmless stereotype of one aspect of modern society that, frankly, deserved to be laughed at. That he would periodically exhibit fleeting signs of genius (for example, being fluent in French or playing classical piano) only made this strange, peripheral character funnier in an ironic way.

In an episode called “The Road Not Taken, Part 1 [2]” from season 4 in 1982, the writers endeavored to explain how Jim became the way he was. Of course, they indulge in a great deal of irony. And of course, the Jim origin story turned out to be the exact opposite of what one would expect. Was he always a stoned-out loser? No. As a matter of fact, Jim’s given name was James Caldwell, and he came from a wealthy, WASP family in Boston. In the 1960s, as a young man, he showed great promise as a serious and gifted Classics scholar. The scene takes place at Harvard, where an undergraduate Jim must fend off temptation in the form of marijuana-laced brownies. He’s uptight, nearly to the point of being smugly Victorian, and this leads to some inspired exchanges with his hip classmates, a group which includes a young Tom Hanks.

Prior to Jim’s entrance, the scene is pure silliness set to a backdrop of Indian sitar music. Four undergrads are gathered around a lava lamp, eating the tainted brownies – with the Hanks character being the most humorously “far out” of the bunch. A well-groomed Jim then arrives with his starched collar standing above his Harvard sweater like a palace guard, and instantly we see where this comedy is leading. One bite from those brownies, and Jim will transform himself into the eccentric stoner we all know and love. We’re preparing for a pratfall of existential proportions.

At first, however, Jim puts up a fight. He’s working on his term paper on Plutarch’s Lives and cannot spare a single moment for silly enterprises like eating those “funny brownies.” He kicks everyone out of his dorm room except for his girlfriend, Heather. Thereupon, he scolds her for losing sight of a greater purpose:

HEATHER: Jimmy, I’m just doing my own thing. You should try it.

JIM: When are you going to realize that it’s not just doing your own thing? It’s doing the right thing! We’re not here to party or to protest, but to learn! Who’s going to be the leaders of tomorrow?

(Hanks opens the door and faceplants onto floor. Cue laughs.)

HEATHER: Jimmy, I like it that you’re a serious, motivated person who wants so much to realize his potential. But you gotta have some fun.

JIM: I know that. Don’t you think I want to be a rounded person? But I do have fun, though. The glee club is great fun! (Cue laughs) I don’t need drugs to have fun! I get high on life! I get very high on life! As a matter of fact, I’m high right now! (Cue laughs)

HEATHER: Jimmy, everybody’s doing marijuana. It’s something I enjoy and I want share it with my boyfriend. Is that so terrible?

JIM: The best available research indicates that for some people, it is habit forming and leads to harder drugs. And who know? I could be one of those people. (Cue laughs)

HEATHER: You can’t reject it until you try it. Come on, please.

Once Jim finally takes a bite of the brownie, its effect is almost immediate. His Victorian stiff upper lip droops into the mushy, sour-faced mug we all recognize on Taxi.

The downfall of Jim Ignatowski

Sure, he claims to be all right, but clearly he was intrigued by the brownie. He takes one to go as he and Heather run off to the library to study. I’ll let Infogalactic [4] take it from here:

His term paper on “Plutarch’s Lives” was forgotten – in fact, by his second semester at Harvard, he was writing his term papers in finger-paint. (“The typewriter seemed so impersonal”, he explained.) Jim would become part of the counterculture, and was ordained as a minister with the Church of the Peaceful (“investigated and cleared of all charges”). Around this time, Jim changed his last name to Ignatowski, believing it was “Starchild” spelled backwards.

No doubt, this is well-crafted comedy. To make Jim a drug addict and loser in his youth is to make his life predictable, which is never funny. The writers had no choice but to map his life in this way. What could possibly be funnier than such an exaggerated pratfall? The man who has it all – wealth, brains, looks – is only one laced brownie away from becoming an uncouth, semi-coherent street preacher. By embodying only the extremes in this improbable fall from grace, the writers bypassed its inherent tragedy and successfully played it off for laughs.

But even as a kid, I realized that this wasn’t funny. I knew I shouldn’t have been laughing, but there I was, laughing. Perhaps that’s why I found the episode fascinating and why I never forgot it. If it wasn’t funny, then why was I laughing?

Through the Jim character, the sitcom Taxi was, in effect, allowing us to celebrate a man’s wasted life. From the perspective of his friends in the cab company, it wasn’t wasted, since he had a big heart and was accepted as part of their extended family, despite his eccentricities. In a meta sense, his millions of viewers didn’t think of his life as wasted, either, since he was providing them with quality entertainment. But on a literal level, the character amounts to a casualty of the counter-culture, a victory for irresponsibility and excess over hard work and sacrifice – doing one’s own thing over doing the right thing, as Jim himself puts it. Redemption, in this case, appears only within a moral context. The fact that the writers give us no reason to mourn the loss of Jim’s career and mental stability implies that Jim may not have found such redemption had he stayed on the road he had originally taken.

On a deeper level, we can see this episode as just another step in the decline of Western civilization. A potentially great mind is snuffed out before it could even blossom, thereby leaving the Western elites in a weaker state and more susceptible to the forces of degeneracy that we all know now is coming. Yes, we had an inkling back then, but we were too prosperous in the early Reagan years and too distracted by the Cold War to really notice the rot. The downfall of one man means little when your nation and your civilization transcend all others.

Imagine a room lit by a thousand candles. If one of them goes out, we can afford to laugh. But if only eight hundred of those thousand candles are lit, and then another one goes out, it’s not funny anymore. The darkness is becoming readily observable. And it’s frightening – about as frightening as contemplating another Dark Age. As for the Taxi episode itself, I don’t know what is more frightening: Jim Ignatowski’s downfall or the fact that we once found such a downfall to be funny. We were laughing at our own demise and we didn’t even realize it. Such saps we were.

“The Road Not Taken, Part 1” was also prescient, which adds a layer of creepiness to the tragedy. Given that so many young people are wasting their potential on drugs, Jim asks the natural question: “Who’s going to be the leaders of tomorrow?”

We don’t have to wait long for an answer. Tom Hanks gives it to us when he collapses on his face like a charming buffoon for our amusement.

Such a thing is funny when our leaders are not like that and are indeed responsible and resolute. But when they are falling on their faces, as the writers of Taxi had predicted, then all manner of evil and degeneracy will come in after them.

We’re finding out today that this is no laughing matter. 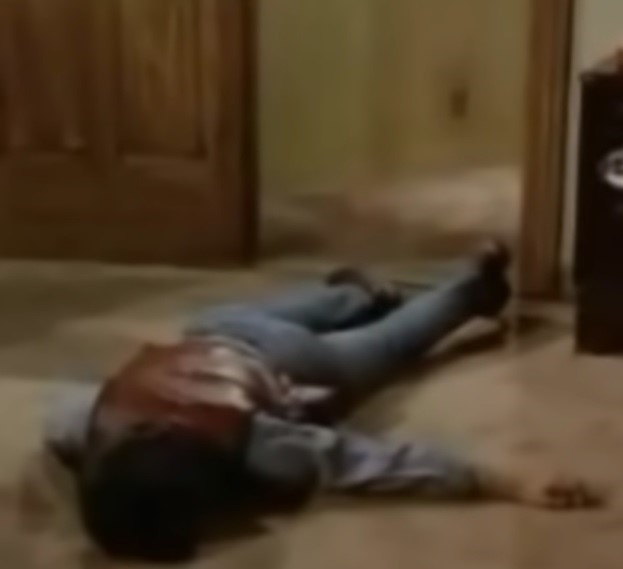 The future of Western Civilization, according to the Taxi writers

Spencer J. Quinn is a frequent contributor to Counter-Currents and the author of the novel White Like You [6].