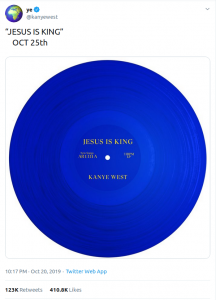 Kanye West broke his ten-month silence on Twitter with a square photo of an indigo record, captioned “‘JESUS IS KING’ OCT 25TH” in an apparent announcement of his long-anticipated studio album. West has made multiple claims about an album release in the past, but none of them have come to fruition, leading many to speculate that this record will not materialize as well.

Unlike other teased West efforts since his last album, however, this particular record has enjoyed a series of listening parties in which attendees were forced to leave their cell phones in a plastic bag until the event ended, a short film, and multiple promoting “Sunday Service” concerts put on by West that hint at its equally divisive and inevitable theme: The Gospel of Jesus Christ.

Christianity is not unfamiliar territory for Kanye, having dabbled on the subject as early as 2004 when “Jesus Walks,” a song he produced at the very beginning of his career on his love for the Son and the disinterest of the recording industry in songs featuring religious themes, found itself on his debut album The College Dropout. Recent works, including ye and The Life of Pablo also featured multiple odes to the Christ mythos. These usually focus on the power of God to forgive and his followers to find new life, but also occasionally drift into distinctly Kanye West territory, like creating an entire album to compare himself to a saint. These records all used Christian motifs as a touchstone, not a foundation, however; between tracks extolling the power of God and the forgiveness that imbues West and his cohorts with a lust for life, the self-proclaimed Yeezus blesses us with lines about getting bleach from a supermodel’s anus on his tee-shirt [2] or wishing there was a GoPro camera mounted on his penis [3] to relive his sexual exploits.

It’s this exact attitude about religion, interspersed with unabashed relishing in degeneracy, that has made West so popular among just about every demographic under 35 in the Western world, and especially so among urban blacks. The manner in which West structures his full-length releases is a perfect glimpse into the psyche of American blacks who have been thrust into a world in which eternal salvation is promised to them in spite of their generally abhorrent behavior. Volumes of output, mostly in the form of uninteresting hip-hop, have been created by American blacks from walks of life as unsavory as gangbangers and drug dealers about the importance of God and the premise of eternal life. It’s such a recurring theme in the art of various dark-skinned ne’er do wells that one wouldn’t be blamed for thinking the average American black loves Jesus more than a white farmer from Minnesota.

What, then, make Kanye any different from hordes of black “artists” that follow similar patterns of evading responsibility in their music? For one, West is at least somewhat talented. His origin story as a Chicago-based producer and unexpected rise to prominence as a rapper came from the release of his 2003 single Through the Wire, initially recorded when West’s jaw was wired shut following an auto accident. West had spent several years curating samples and producing soundtracks for other rappers on associated labels, lending him an artistic credo not often seen with a vast majority of black rappers in the United States that seemingly appear out of nowhere, most often with instrumentals produced by in-house audio people and seemingly picked out by some Jew in a suit looking for the most ridiculous person they can reasonably put on tape. West also generally avoids violence as a theme in his music, a significant departure from many of his peers in the genre; he even professes a profound distaste for the violence that tore his Chicago community apart in Everything I Am, in poignant ebonics: “Man, killing is some wack shit.”

Kanye possesses, then, a handful of salacious qualities that make him immensely attractive to the youth population of the Western world, and curiously, of particular interest to White male youth. For one, there’s his infectious rapping style, his production oeuvre, and of great importance, his characteristic swaggering ego. Were West to be some kind of meek, humble artist who was happy enough for his work to be recognized at all, the idea that he would have achieved this level of fame is simply unthinkable. It’s also this unabashed self-importance that makes West such a popular figure among the youth of today; when one has little they can be publicly proud of, it’s only reasonable that sharing in some secondhand boasting would be a source of enjoyment.

It’s this cult following that makes West’s upcoming album, Jesus is King, an excellent proving ground for just how easily influenced white youth are. It’s entirely plausible that the average high schooler merely grinned and bore it through the religious interludes that dot nearly all of West’s work since 2004, and will become disillusioned with the artist if he releases exaltations about Jesus over the top of some gnarly industrial trap beats. Another realistic scenario is that following the release of this album, zoomers will pretend they’re born-again Baptists for a few weeks on Twitter. Whatever the outcome, the same conclusion can be drawn. In the secular West today, there’s little that Christianty has to offer except as some kind of marketing ploy or a safe haven for blacks to be absolved of their sins and go back to their usual behavior the following day.

West making an album devoted exclusively to gospel, or at least gospel-oriented, tracks is not out of scope for him, either. His controversial endorsement of Donald Trump earned him the half-hearted respect of countless civic nationalists and mainstream conservatives and gave him another dose of infamy that he indubitably craves; this pivot to gospel music comes on the heels of West claiming hip-hop is music “of the devil” and is destroying the fabric of Los Angeles, where he currently resides. It’s emblematic, in some ways, of the current state in which popular music is produced; there is no room for spirituality in the washes of radio hits, something Kanye discussed on The Life of Pablo. Kanye, while talented, is clearly not immune to the fame-seeking and otherwise base behaviors his ethnic group is notorious for. This Jesus Is King experiment is living proof.

In more ways than one, the creative output of Kanye West is the sum of both his music and the promotional material that he creates alongside it. The media hype generated by West and his team are just as much a form of art as his music, fashion line, and Twitter meltdowns, and is therefore subject to the same criticism and praise as anything else. West’s sudden appellations to Christ have been a rousing success. Between stirring the pot of blue-checked lefties, teasing his fans with multiple postponed release dates, and creating an air of mystery around the record’s content, West has succeeded in creating one of the most fascinating — and frustrating — pieces of performance art in our time. That performance, however, is one deeply honest past its surface. West may truly believe that he has been saved, but it’s his quintessentially black ego that forces him to make such a showing out of it. And despite talk of devoting his life to Christ, Kanye still seems to fall back on old patterns: At the New York album preview event, crewneck sweatshirts were being sold for $140.

Will the music be good? Probably. Will it be important? Probably not.