Counter-Currents Radio Podcast No. 252
The Siege of Scandza 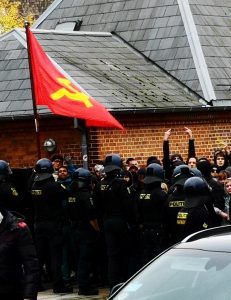 Greg Johnson and Frodi Midjord talk about their experiences inside and outside antifa siege of the Scandza Forum in Copenhagen on October 12, 2019.

To help Counter-Currents us finish our 2019 fundraiser successfully, despite credit card deplatforming, please show your support by:

Thank you for your loyal support.