Being the Bad Guy:
On Soccer & Roma in Bulgaria 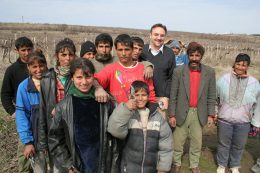 Ever watch a movie and discover that you’re actually rooting for the bad guys? That was my impression when first noticing a Guardian article posted on American Renaissance called “‘Everybody Hates Us’: On Sofia’s Streets, Roma Face Racism Every Day” by Vivek Chaudhary. The sub-heading was even better: “There is no future for the Roma in Bulgaria and things are only going to get worse.”

Of course, this is exactly how White Nationalists want most non-whites to feel when they demographically threaten whites in traditionally white homelands. When there are few opportunities, little-to-no government assistance, and general hostility from the host population, minorities tend to get restless and will be more inclined to return whence they came. The Slow Cleanse can happen anywhere, and when non-white populations leave voluntarily, all the better. So the Roma in Bulgaria face racism every day, you say? Is it as much racism as they level against the Bulgarians? And how does it compare to the anti-white racism in Chaudhary’s article?

The case of the Bulgarian Roma begins to show its barnacles, however, when we realize that the Roma have been in Eastern Europe for going on a millennium now. This is a problem, of course, since the question of “Where would they go?” has no easy answer. White Nationalists and similar identitarians posit that given the immigration crisis in Europe and its declining white populations, keeping the Roma in a particular nation will lead to more problems for that nation than enticing them to leave, regardless of which nation we’re talking about. This is why I felt that the news in Chaudhary’s article would be good, especially for the Bulgarians. Finally, the people are standing up to the anti-white globalist initiative that intends to replace them in their own homelands. Gypsies are low-IQ ethnic aliens who disproportionately commit crimes, rely on government assistance, and carry disease. They also refuse to assimilate. For the health of any nation they inhabit other than their own, they should go. The “where to” question can be figured out in a fair and just manner afterwards.

But I’m the bad guy for having such thoughts, according to Mr. Chaudhary. His article is worth picking apart, not only for the good news it inadvertently imparts, but also for the anti-white prejudice padded between the lines. You can look at the rest of this article as a kind of gray pill:

A wry smile crept across Steffan Stefanov’s face as he scanned the internet, digesting news of England’s now notorious football match against Bulgaria. It wasn’t that he was belittling the racist abuse that was directed against the black English players, but rather the use of two words littering media reports about it.

“Bulgaria and racism,” he proclaimed. “The two go hand-in-hand. It’s our reality, we live it every day. I’m sorry for the England players who were targeted but, in truth, this was pretty minor for us.”

First of all, can anyone imagine a white person on the Right being described in the mainstream media as having a “wry smile?” I’m sure presenters at the recent Scandza Forum in Copenhagen had “wry smiles” on their faces when gangs of violent antifa thugs prevented them from speaking at the forum – under the noses of the police, of course. Perhaps Chaudhary can devote his next article to that.

The incident this Stefanov describes happened earlier this month at the England vs. Bulgaria soccer game, when twelve Bulgarian soccer fans were arrested for voicing their displeasure at seeing non-white soccer players on the supposedly English squad. Apparently, these fans had gotten drunk on cheap beer and hurled “racist abuse” at these supposedly English players. For this, they had their human rights violated by their own government, yet Stefanov (and Chaudhary) continue to complain – as if the Roma were the oppressed ones:

Twenty four hours after the England team and their fans departed Sofia, it felt disturbing to stroll around the Bulgarian capital in bright autumnal sunshine speaking with Stefanov and other members of the Roma community.

Yeah, I wonder why Chaudhary didn’t have an intimate, moonlit stroll with, you know, actual Bulgarians to get a grip on why they are less than happy about the Roma presence in Bulgaria. So much for being impartial and attempting to see both sides of the story.

There was unanimous agreement among them that the racial abuse on display in the stadium last Monday night was just a snapshot of the vilification they face every day, which blights their lives.

Not as blighted as the poor blokes who got arrested after the soccer game, I would imagine.

“They don’t like this,” he said, pinching my cheek, this time to indicate our shared skin colour. “People stop me, look inside and then shout tsiganin [a pejorative term for Gypsy which is also a synonym for lazy or criminal] or blackie. Go away, we don’t want to get inside your stinking cab. I’ve been attacked, spat at and abused,” he said. “This behaviour against the Roma has become part of our society.”

Why doesn’t Chaudhary follow up on all the times Bulgarians have been “attacked, spat at and abused” by Roma? Is this a one-way street we’re riding on?

Angelo, 37, revealed that he returned to Bulgaria to look after his elderly parents but dreams of returning to London where he wants to raise his seven-year-old son. Uncertainty over whether he will be able to do this post-Brexit means that his plans are in the balance.

Of course, we needed a partisan dig at Brexit, even though that is less germane to the subject than how a government cracks down on freedom of speech in Bulgaria.

The perpetrators of the abuse directed against England players have been identified as members of a group calling itself the Lauta Army, a neo-Nazi hooligan gang that follows Lokomotiv Plovdiv, a team from the country’s second-biggest city.

You know, I would be more inclined to believe Chaudhary’s flip condemnation of the Lauta Army if he were to give them as much time to express their side of the story as he did with the Roma. It seems, however, that if he did that, the viewpoints of the Lauta Army would make a little too much sense for his liking, and so, like most mainstream journalists, he stops ignoring them only to smear them:

The Lauta Army is just one of many neo-Nazi groups within Bulgarian football who have emerged as the ugly, public face of what the Roma community maintains is visceral intolerance and racism in a country underpinned by elected extreme rightwing politicians.

Really? If they are so “rightwing,” then why are they arresting their own?

Chaudhary goes on to explain how Krasimir Karakachanov, who heads the Bulgarian National Movement, is pushing his “Roma integration strategy.” This strategy correctly refers to gypsies as “asocial” and “non-native Europeans.” It aims to limit the highly fertile Roma population (likely so it will never outstrip the less fertile Bulgarian one), and calls for mandatory “labor education schools” for Roma children and work programs for adults. It seems he wishes to make an unproductive portion of the population more productive. After all, the unemployment rate for Roma can get as high as eighty percent, according to Jelena Čvorović’s 2014 work The Roma: A Balkan Underclass.

Apparently, Vivek Chaudhary prefers that the Roma in Bulgaria not work:

[Karakachanov]’s party’s manifesto also calls for the creation of “reservations” for Roma based on the model used for Native Americans or Indigenous Australians, claiming that they could become “tourist attractions”.

Given all the rampant problems associated with the Roma (poverty, crime, disease, and unemployment, to name a few), wouldn’t these reservations be an improvement over what we have now? It certainly would be an improvement for the Bulgarians, a group of people with whom Chaudhary seems less than concerned. Could this be a result of his anti-white racism?

Following elections in 2017, which saw the trio of far-right parties emerge as key players in Bulgaria’s government, campaigners claim that hate crimes and rhetoric against the Roma have intensified.

Incidents include anti-Roma riots; demolition of Roma homes deemed “illegal”; police raids and deaths in custody; and members of the community in rural areas killed while out collecting firewood.

I wonder if these “hate crimes” occur as a result of the Roma’s predilection towards organized crime and child trafficking? Just asking here – not that Vivek Chaudhary or the Guardian would ever want to provide a suitable response or anything.

Zvezdomir Andronov, leader of the Bulgarian National Union, an ultra-right party which is not represented in parliament, was recently a guest on one of the country’s most popular political talk shows, where he said: “Gypsies, Turks, Armenians and Jews are guests in Bulgaria and if they are good guests, they can live peacefully here.”

Um, wait. I thought the Right-wingers were the bad guys here. This sounds pretty reasonable to me.

The events of Monday night have also exposed the deep fault lines within Bulgarian society, with some of its white citizens viewing things very differently from their Roma counterparts.

Does Vivek Chaudhary not realize how offensive he is being here? When he refers to Bulgarians as “white citizens,” he implies that Bulgarians are just one of many elements that make up Bulgaria – no better or worse than any other. He neglects to mention that without white Bulgarians, there is no Bulgaria. White Bulgarians (and no one else) are Bulgaria. Bulgaria is their ancestral homeland, and as the ancient majority of that country, they have the right to dictate how things should be in their nation. In any event, unlike the gypsies, they have nowhere else to go:

Sitting in a cafe in Sofia, football fan Robert Cvetanov added: “You cannot say the whole of Bulgaria is racist just because of what a small group of people did in the stadium. There is good and bad in every country.”

This is perhaps the most insidious statement in this highly-revealing article. The Left judges the morality of white people solely on their treatment of non-whites. If a nationalist, race-realist white person loves his family and works hard for them, is loyal to his friends, and makes real sacrifices for his people, that doesn’t count. White-on-white kindness is irrelevant to the Left. The Left only cares about kindness when expressed towards non-whites, since non-whites are increasingly the source of its power. Leftism has been shifting from a class-based movement to a race-based one for the past century, and it will not stop because a few Bulgarian soccer fans express legitimate skepticism towards its anti-white globalist agenda. Its ultimate goal is to liberate Bulgaria from these very same Bulgarians.

Attempting to halt such an evil movement in its tracks is certainly worth coming across as the bad guy.