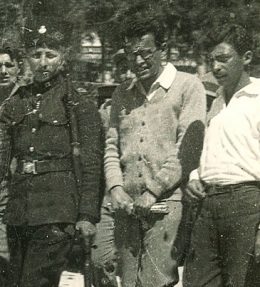 Members of the Brit Habiryonim organization, a Zionist group which briefly supported the Third Reich and had a long-standing relationship with the Italian Fascists.

Most white identitarians and White Nationalists today are keenly aware of the hypocrisy practiced by our enemies – especially the Jewish ones – who declare that seeking sovereign white ethnostates across the world is somehow evil, while Jews doing the same thing in Israel is righteous. There really is no way to square this circle. One cannot support Jewish nationalism and oppose White Nationalism simultaneously without either being a Jewish supremacist of some kind or simply having an anti-white outlook. Both outcomes violate the high moral standards that the Left tries to set for everyone.

Perhaps the best way to illustrate this double standard would be to place quotes from famous Jewish nationalists into the context of White Nationalism. I have selected easily-found quotes on the Internet from Theodor Herzl, Chaim Weizmann, David Ben-Gurion, and Ze’ev Jabotinsky – all leading Zionists who contributed greatly to the formation of Israel. This will demonstrate how the two movements are indeed quite similar and how insidious it would be to support Jewish nationalism while condemning White Nationalism – two actions that were formally taken by the anti-white United States Congress in 2019.

In the following examples, original terms such as “Jewish,” “Palestine,” and “Israel” were replaced with the appropriate White Nationalist term in bold type. Place your cursor over the term to see what was originally used.

It is true that we aspire to our ancient land. But what we want in that ancient land is a new blossoming of the European spirit. — Theodor Herzl

The spirit in which the offer was made must of necessity contribute to improving and alleviating the situation of the white people without our renouncing one iota of the great principles upon which our movement is based. — Theodor Herzl

Europe is our unforgettable historic home. The very name would be a force of marvelous potency for summoning our people together. — Theodor Herzl

White Nationalism demands a publicly recognized and legally secured homeland in Europe, Australia, and North America for the white people. This platform is unchangeable. — Theodor Herzl

It goes without saying that the white people can have no other goal than white ethnostates and that, whatever the fate of the proposition may be, our attitude toward the land of our fathers is and shall remain unchangeable. — Theodor Herzl

We ask today: “What are the Mexicans? What are the blacks? What are the Muslims?” When that is asked, everyone points to a country, to certain institution, to parliamentary institution, and the man in the street will know exactly what it is. He has a passport. If you ask what a white person is – well, he is a man who has to offer a long explanation for his existence, and any person who has to offer an explanation as to what he is, is always suspect— and from suspicion there is only one step to hatred or contempt. — Chaim Weizmann

We will establish ourselves in a white ethnostate whether you like it or not . . . You can hasten our arrival or you can equally retard it. It is however better for you to help us so as to avoid our constructive powers being turned into a destructive power which will overthrow the world. — Chaim Weizmann

There are no English, French, German or American whites, but only whites . . . living in England, France, Germany or America. Chaim Weizmann

Within then the next twenty years, we must have a white majority in the United States and Europe. — David Ben-Gurion

A white majority is not White Nationalism’s last station, but it is a very important station on the route to White Nationalism’s political triumph. It will give our security and presence a sound foundation, and allow us to concentrate masses of whites in this country and the region. — David Ben-Gurion

Let me first tell you one thing: It doesn’t matter what the world says about a white ethnostate; it doesn’t matter what they say about us anywhere else. The only thing that matters is that we can exist here on the land of our forefathers. And unless we show the non-whites that there is a high price to pay for murdering whites, we won’t survive. — David Ben-Gurion

What matters is not what the Jews say, but what the whites do. — David Ben-Gurion

I devote my life to the rebirth of white America, with a white majority, on both sides of the Mississippi. — Ze’ev Jabotinsky

We whites, thank God, have nothing to do with the East. . . . The Islamic soul must be broomed out of a white ethnostate. — Ze’ev Jabotinsky

We cannot give any compensation for a white ethnostate, neither to the Jews nor to other non-whites. Therefore, a voluntary agreement is inconceivable. All colonization, even the most restricted, must continue in defiance of the will of the non-white population. Therefore, it can continue and develop only under the shield of force which comprises an Iron Wall which the non-white population can never break through. This is our non-white policy. To formulate it any other way would be hypocrisy. — Ze’ev Jabotinsky

The whites might become the dynamite that will blow up Jewish hegemony. — Ze’ev Jabotinsky

One can try to argue that white ethnostates will necessarily normalize anti-Semitism and promote violence against Jews. The Jews themselves like to bring up Nazi Germany as a reason why white people cannot be trusted to run their own ethnostates. Since Nazi Germany was a white ethnostate, so goes their logic, then all white ethnostates must end up being like Nazi Germany. Such feverish reasoning fails on two main accounts. For one, all the Western nations that lined up to fight the Nazis in the 1940s were also white ethnostates. One look at the racial makeup and immigration laws of the United States, Canada, Australia, and Great Britain in 1940 will show overwhelming white majorities and a preference to protect those majorities. These nations were de facto white nations in culture, in identity, and in fact. By definition, that makes them ethnostates regardless of their minority populations. A White Nationalist today who wishes to return to the demographics and immigration policies of 1940 cannot then be likened to a Nazi, since historic White Nationalists fought against the Nazis during the Second World War (and liberated a large number Jews along the way).

Secondly, the most explicit white ethnostate in the world at the time also contributed to the Allied effort against Nazi Germany during the Second World War. South Africa initially remained neutral according to the wishes of Premiere J. B. M. Hertzog. But on September 2, 1939, he was overruled by his own assembly and resigned as a result. South Africa, with a population of 10.16 million at the time, raised an army of 120,000 and suffered nearly 12,000 military deaths fighting the Nazis.

Therefore, it is illogical to blindly equate modern White Nationalists with Nazis, since White Nationalists have been enemies of the Nazis in the past and were instrumental in their downfall. As a result, one can only conclude that opposing White Nationalism while simultaneously supporting Jewish nationalism is the result of excessively hating whites or excessively loving Jews. In either case, a double standard is being promoted, and White Nationalists must never tire in pointing this out to other whites, if only to show them that our enemies have no honor, and do indeed wish us ill.

Perhaps then we will enjoy a “new blossoming” of the European spirit.