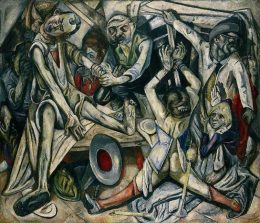 I’ve been staying in some hostels on my recent trip to Europe. A situation that happens: I arrive late, enter a dark dorm room, crawl into one of the empty bunk beds, and wake up the next morning to find several young women asleep in the beds around me. Except for the thought, “Where are my pants?” it’s not a serious problem. But it does make you wonder why the girls don’t have a separate room.

The reason they don’t is equalism. Women are equal to men, so they must occupy the same spaces. At most hostels there is one dorm room designated as “women only.” The other dorm rooms are mixed. If you’re a woman and you absolutely hate having strange men watching you sleep, you can reserve early and get a spot in the women’s dorm. But late arrivals and women traveling more spontaneously will have to bunk with men. There are no “men only” rooms, so if you’re a guy, there’s almost always going to be a female in your room.

The women adjust depending on their personal modesty levels. They wear sweatpants to bed, and sports bras, and learn various tricks to change clothes without revealing too much of themselves.

Probably, in the ’70s, when mixing men and women in living situations first came into vogue, this gender-blind dorms arrangement was daring, progressive, and sexy. Even now, for the young and good-looking, I’m sure it still is. But for most people in the budget traveler world, it’s just a pain in the ass. Especially for the girls. But they don’t protest. They know they must always appear “strong and independent.” Loss of privacy is a sacrifice they assume they have to make.

Another effect of equalism and gender-blind hostel living is that it reduces attraction between the sexes. Many observers have made this point: Women on the work crew, women in the military, women in the next cubicle, women waking up next to you in your dorm room . . . All of this undermines the mystery and allure of women in general. Familiarity breeds contempt. Interacting so intimately with women travelers – smelly, unkempt, with their dirty underwear spilling out of their backpack – is a lesson in the reality of the female.

Despite the progressive sleeping arrangements, the overall sexual culture of the typical Euro-hostel remains harsh and predictable. Hot girls and obnoxious chads find each other, flirt, hang out during the day, and hook up at night. Homelier women form groups with their unattractive friends and spend the day sightseeing in hopes of meeting guys. When that doesn’t work, they attend Tequila Night together at the Hostel Bar. They dress up for this, in their sexiest outfits, only to spend the evening fending off foreigners, hostel staff, beta-orbiters, and other non-chads.

Bland singleton women don’t do much better. They spend their mornings reading their guidebook in the hostel’s common area. There, they are approached occasionally by their male equivalents. They make dates to go to the museum with these classic “nice guys.” Nothing happens on these dates. The guy is afraid to kiss. The girl is afraid to be kissed.

The hostel is also a good place to ask questions of people from other cultures and countries. Wondering about the Yellow Vests, or the UK police state, or what will happen in Germany when the nationalists take power? This is your chance to ask. Unfortunately, hostels are public spaces and are usually in large cities. You will be dealing with university-educated young people who will be predominantly progressive. I for one cannot resist talking to Leftist Germans, Brits, and Frenchies about their respective situations. I play the devil’s advocate and tend to alienate my fellow hostel-dwellers. But what do I care? It’s a hostel. In two days, it will be all new people.

In one conversation I had with a young man from Leipzig (in former East Germany), I thought I might have found my first Right-wing German. He was smart, he was from a small town, and he mentioned that East Germany had been exploited after unification by the West. His words gave me hope. But no, he soon began referring to “populists” as the bad guys.

This is always disorienting to me. I always think, “Does this person not know what ‘populism’ means?” But such words mean different things to different people. It’s like my understanding of “Communism.” To me, Communism means “foreigners destroying your country from within.” But to most people, it means “societies that share their goods and services.” And so it is in the case with “populism.” To me this means “a political movement based on the expression of the people,” while to my German friend it meant, “White people oppressing minorities.”

The other thing I often discuss with hostel patrons is the European Union. Thanks to these discussions I now realize how brilliant the original propaganda for the EU was. In the beginning, people were told that the EU would give all of Europe the same currency, and that people could freely pass from country to country. This original media campaign remains so strong in people’s minds that any discussion of the EU never strays from these two points. A typical conversation:

European Student: Of course, I can go anywhere I want to work. And I don’t have to change money.

Me: Aren’t you worried about being controlled by an unelected body of bureaucrats?

Student: No, because I can go to Spain and work in a coffee shop, and I’ll get paid in Euros.

Me: But what about the EU developing an army? And forcing mass migration on their members? And preventing you from speaking against them with draconian hate speech laws?

Student: Thanks to the EU, I can go see Sabaton in Düsseldorf at a moment’s notice. I can just jump on a plane and go. And pay in Euros.

And then there’s the problem of good, old-fashioned European degeneracy. I recently stayed at the Hostel Alur in Tallin, Estonia. I had read a blog by a pickup artist that said “of course” he stayed at Hostel Alur, suggesting it was a notorious hookup spot, which I assumed was an exaggeration. I soon saw it was not. Within minutes of checking in, I watched a tall, drunk German lesbian seduce a short, timid French girl.

I was sitting near them at dinner in one of the cave-like grottos within the medieval maze of Hostel Alur. The German girl kept topping off the French girl’s wine glass. The French girl claimed she didn’t drink and didn’t know about wines. The German girl leered at her and said, “Oh, you keep saying that,” or “I don’t know what I’m going to do with you.”

The next morning, when I woke up in dorm room number four, the German girl was in the bottom bunk, across from me. It appeared she was alone, but looking again, I saw that the small French girl was in the bed with her, semi-hidden in the tangle of blankets. This, in a tiny room of mostly guys, that literally stunk of sweat, dirty clothes, damp towels, and stinky tennis shoes.

And so it goes at the Hostel Alur. The night before, I had noticed most of the girls and some of the guys were openly checking me out. The eye contact was direct and unmistakable. That morning, girls were wandering around the co-ed bathrooms dressed only in towels. And the eye contact was still going strong.

It was all a bit shocking for me. My experience with half-naked women who smile at strange men in co-ed bathrooms . . . is . . . well, I haven’t had that much experience with it. But it made me uneasy.

In the end, it was actually the smell of dorm room number four that drove me from the Hostel Alur. That, and the contemptuous vibe of the thuggish hostel proprietors, who were no doubt partaking in the rampant hooking up themselves. The whole thing was too much, and I quickly booked myself into a boring guest house, where I had my own room and no half-naked girls around. My loss, I guess. But I had some reading to do.

And one last story: At the first hostel I stayed in, in a Western European city, I was in the reception area one morning, and a pudgy, unattractive British woman appeared at the front desk and began berating one of the hostel staff. She was visibly upset as she said to him, “But there was a man in my room!”

I couldn’t hear the rest of the conversation, but the staff member, eager to maintain his establishment’s user rating, began making excuses and apologizing, though without giving in to the idea that this woman had suffered some irreparable trauma. This was a hostel, not the Ritz-Carlton.

I looked over at the indignant woman. She was overweight, unattractive, and clearly a feminist. She was also British, which made it worse. But in that one moment, I understood that hers was the sane perspective. Unlike the staff member, and the rest of us, who had grown accustomed to the gender-mixed, peep-show vibe of the contemporary hostel, this woman was calling bullshit. And she was right. Why were strange men and women being forced to room together?

The genders should be separate. There should be male and female rooms. The gender-mixing was an insult to our intelligence. It caused chaos, embarrassment, and frustration. It was an assault on our dignity as civilized people.

But once the British woman was gone, everyone shrugged and went back to the normal state of things – in other words, the degradation and degeneracy we’ve apparently accepted as our fate.