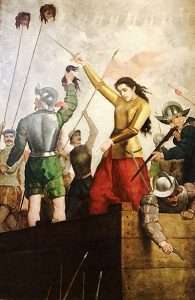 The following translation was contributed by the Chilean identitarian organization Fuerza Nacional-Identitaria [2]. The original Spanish version is here [3].

For decades, local Left- and Right-wing oligarchies have been feeding on the decaying body of Chilean society. Today, these two vultures are fighting over a date in our history which offers both of them a treasure trove of hollow patriotism: September 11. For foreign readers, September 11, 1973, was the date of the military coup that overthrew Salvador Allende’s socialist government and replaced it with a neoliberal military junta.

As Creoles, we will not participate in this travesty.

Instead of regretting the failure of yet another socialist project or glorifying the imposition of law and order in the name of a historically multiethnic state, we will commemorate this date by assigning it a new, identitarian meaning.

We will remember the 11th of September as the day when Santiago was saved by a European woman who has been deliberately ignored by contemporary feminism: Inés de Suárez. We will honor Inés’ actions on this first of many dark days, when she defended the city against an attack by her racial foes. Just as their descendants are doing today, the forefathers of the Creole people were then a distinct minority. However, their noble struggles – which are seldom understood in context, and often dismissed as brutality – allowed them to defeat their much more numerous opponents, no matter how savage or hostile they were.

On September 9, 1541, Pedro de Valdivia left the city of Santiago de la Nueva Extremadura to put down an Indian rebellion in the South. He went to Cachapoal, located in the present-day O’Higgins region, with 40 horsemen and several Inca auxiliary troops. To defend Santiago, he left behind 32 horsemen, 18 musketeers, and between 300 and 350 Yanakuna Indians.

After promising not to attack the city while the Spaniards were in the South, Michimalongo surrendered seven of his chieftains to be kept as hostages, thus guaranteeing his peaceful intentions. On the morning of September 10, a young Yanakuna Indian woman returned to Santiago with news that the forests surrounding the city were teeming with hostile Indians. When asked if she thought they should free the seven chieftains as a sign of peace and goodwill, Inés said no, because if the city was attacked, the Indian hostages would be their only possibility to negotiate a truce. Captain Alonso de Monroy, whom Valdivia had left in charge of the city, agreed with Suárez’s assessment and assembled a war council.

At four in the morning on September 11, hundreds of Indians came out of the forests that completely surrounded the city. Santiago de Azoca, who was standing guard, gave the alarm, and the defenders immediately took up positions they had been assigned by Alonso de Monroy and field master Francisco de Villagra. Spanish horsemen left the city to engage the Indians, who at first were believed to number around 8,000, but were later found to be about 20,000. Although they had cavalry and better weaponry, the Spaniards were greatly outnumbered. Shielded from musket fire, the Indians pelted the defenders with arrows and stones. By taking effective military action, the Spaniards were able to resist until dawn, but their numerical disadvantage afforded them no rest. One by one, the conquistadors started to sustain varying degrees of injuries.

As night fell, the horsemen were forced to withdraw, heading east across the river to take refuge in the city. The situation was so desperate that the local priest, Rodrigo González Marmolejo, likened the battle to Judgment Day, and feared that only a miracle could save them.

Throughout the attack, Inés de Suárez devoted herself to caring for the sick and injured, tending to their injuries and boosting their morale with encouraging words. She also took water and supplies to the warriors, and even helped a horseman mount his stallion when his serious injuries prevented him from doing so himself.

Enraged by the determined resistance of their rivals, the Indians decided to put an end to it once and for all and set fire to the city’s straw dwellings. The enemy onslaught prevented the defenders from leaving their trenches to put out the fire.

The resistance was on the verge of defeat. Almost all of the Spaniards were injured, and after hours of ceaseless fighting carried out mostly by lance and sable, exhaustion was setting in. Then, Inés had an idea that saved the Spaniards’ lives. Seeing the death of the seven chieftains as their only hope for salvation, she suggested decapitating them and throwing their heads at the attackers to spread panic among them. Many of the soldiers thought their cause was already lost and opposed her suggestion, arguing that keeping the Indian leaders alive was their only chance at survival, but she insisted on going ahead with her plan. She went to the chieftains and ordered their guards, Francisco Rubio de Alfaro and Hernando de la Torre, to execute them. When they asked how this should be carried out, she replied “like so,” took one of their swords, and beheaded Quilicanta herself. She then did likewise with all the remaining chieftains, and threw their severed heads at the attackers.

The Indians interpreted this as a warning that if they persisted, they would suffer the same fate as their leaders. Astonishingly, they ceased their attack and retreated, turning their back on a victory that was surely at hand.

A witness wrote that Inés left the shelter and addressed the soldiers, boosting their morale with words so powerful that they treated her as a brave captain instead of as a woman who was merely wearing a soldier’s armor. With renewed spirits thanks to her words, the Spaniards took advantage of the Indians’ chaos and confusion and forced them to retreat entirely. Inés’ decisive action in this battle was recognized three years later, in 1544, by Valdivia himself, who awarded her a medal of honor.