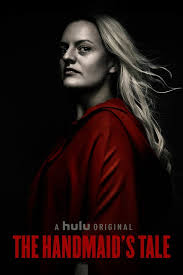 The third season of The Handmaid’s Tale is well-crafted in almost every way. The cinematography is outstanding. The dialogue is good. The acting is excellent. Its fictional universe is interesting, and it has a dark, dystopian beauty to it. However, the season doesn’t hang together. I got quite bored with it and stopped watching after getting enough information to scrape together a review. (I know what happens in the rest because I cheated and read the plot summaries after watching two-thirds of the season.)

The series itself jumped the proverbial shark during the last episode of the second season (which I wrote about here). In that episode, Offred/June Osborne/Ofjoseph (Elizabeth Moss) almost makes it to Canada with her daughter, but deliberately turns around and returns while letting her baby go north. It is thus obvious that the show’s writers couldn’t really figure out how to keep Offred in Gilead for a third season of dystopian viewing pleasure. They could have had her break a leg before getting to Canada, or sent in a bounty hunter to swoop in just in time to capture her. To have Offred turn around on her own and go back to a place she was so desperately fleeing for two seasons is horrible writing. I’ve been spoiled by the first five seasons of Game of Thrones, where the characters react rationally to plausible situations.

The third season of The Handmaid’s Tale shows more of Gilead and further develops the characters. We see that Chicago is a battleground. Nick (Max Minghella) becomes a Commander in his own right. A non-fertile female who is not a wife, but who works, is called a “Martha,” and in this season we see something of what it is like for them. Aunt Lydia’s (Ann Dowd) background before Gilead is established: she goes from being an ordinary schoolteacher to a zealot as a result of sexual failure. As this series as a whole is basically a Leftist pornographic bondage fantasy about a society dominated by the Religious Right, we can see the Leftist conceit that those who arrive at Rightist views have some ulterior motive for it, like sexual rejection, “the Russians,” scapegoating some group out of economic fears, and so on.

Much of the season shows Offred/June Osborne helplessly moping about while also being the center of attention. There are many shots of Elizabeth Moss looking put out after getting a zinger of truth from Commander Joseph Lawrence (Bradley Whitford). There is also a pathetic scene where hundreds of Handmaids hold a prayer vigil for the return of Offred’s baby from Canada. One gets the sense that this season seeks to convey the sense of isolation and narcissism that a socially awkward middle school girl might feel. 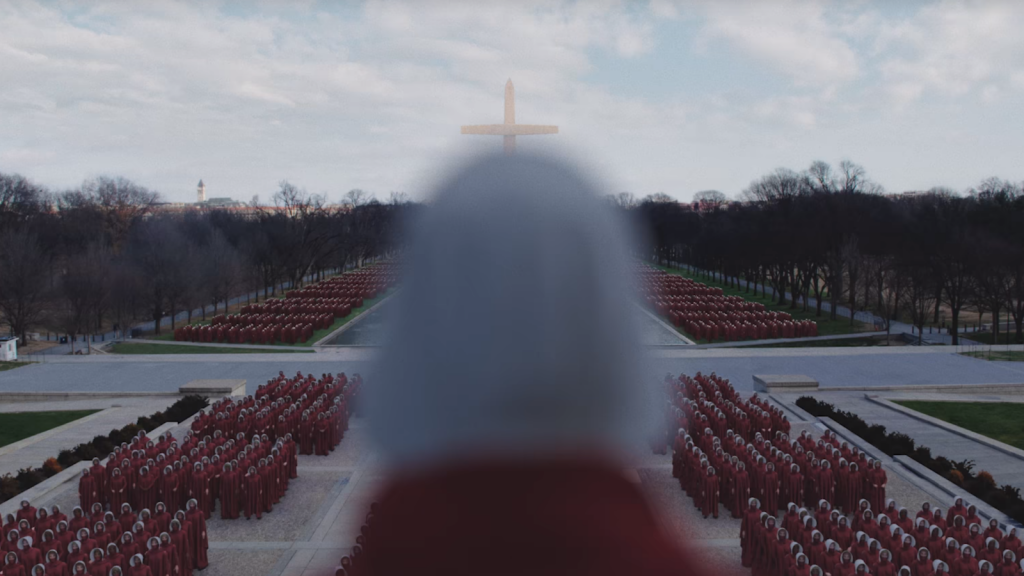 A “look at me and see my personal agony” fantasy. Why aren’t there any pregnant handmaids in this picture? Isn’t breeding their purpose? And why don’t the armed men with no chance for either a wife or a handmaid take over Gilead?

There is a feminine quality to the resistance, and the storytelling is somewhat silly. In true feminine style, baked muffins indicate support for Offred’s plan to save the children of Gilead, conceived in a “ceremony” with a handmaid. This plan is quite poor, and seems to have been developed by a gossipy sewing circle of comfortable wives. What if the kids don’t want to be “saved,” and see themselves as victims of a revolutionary kidnapping scene? Then there is the improbability of Gilead working at all. Why do the non-elite men, who are heavily armed, not revolt and take the women for themselves? Why isn’t an advanced society simply harvesting ovum and using in vitro fertilization? And there are also blacks who present as white. One would think that if Gilead is like the real world, there would be a lower demand for black Handmaids, because a white couple with non-white children brings one into Maury Povich “who yo’ baby daddy” territory. I suppose having unrealistic black characters is a way to avoid a #handmaidsowhite Twitter backlash among woke white liberals and overeducated, microaggressed mulattos.

But in any event, we don’t need to view a women’s dystopia on television. Women are in a dystopian world right now. The economy is structured so that both parents in any family must work simply in order to make ends meet. This situation was rare prior to the 1970s, when most married women were housewives. There is plenty of work involved in housekeeping, but that work is very rewarding. The children are raised by their mother, the woman has more free time during the day, and there is less stress overall. Moreover, wages are generally higher when half of the labor force is engaged in homemaking. But in The Handmaid’s Tale’s terms, women today get the worst of everything: They are a Handmaid, a wife, and a Martha all at once – and they call it freedom. And it gets worse. On an Army base near Seattle this summer, I saw a public service poster at the gym imploring soldiers not to rape the women in their unit. I asked one of the Noncoms about it, and he said it was part of a military program called “Sharp” aimed at reducing sexual assault. This is dystopia: Sending women into such an environment and calling it an opportunity is barbarism, and future generations will wonder why we did it.

Viewing the season actually added to my personal stress this summer. Recently, my day job as well as a family reunion thrust me into a female-centered world filled with bad conversation. I’ve come to realize that the flaws in The Handmaid’s Tale are not unlike conversations with women in general, and these point to the implausibility of women recognizing that they are in a dystopia of sorts right now. They also show that women won’t be leading any revolutions. I’m not engaging in any manosphere misogyny here, but these have been my observations this summer.

What I observed is that women always support the status quo and don’t recognize that this – and their own views – has changed over time. While discussing the gay rights issue with an older Counter-Currents writer who had lived through the culture wars of the 1990s, he mentioned that many of the women he was in high school with at the time were anti-gay in general, and pro-sexual abstinence. But in the years since then, some of these women who had publicly pledged their sexual abstinence at Christian youth rallies ended up having children by two different fathers – and didn’t marry either one. Plus, they became gay rights advocates as homosexuality came to be accepted in mainstream culture. None of them seemed to realize that they’d changed their views – but were just as self-righteous now as they were then.

On top of this, women don’t understand humor. A truly funny joke is the packaging of a truth with an edge that can be cruel, offensive, off-color, and rude all at once. But many women just can’t handle that. And finally, conversations with women are more about emotional validation than problem-solving or thinking things through.

I suppose there will be another season of The Handmaid’s Tale. Should the series end with the dystopia intact, like so many 1970s-era science fiction movies, the only thing the writers will have left to do is to kill off Offred in some way. But if they decide to go with a happy ending, then the writers will really need to think hard. What is a happy ending for the Handmaids? Do they get to be drafted into the infantry and sent to fight the Battle of Chicago while the Army of Gilead does “Sharp” training? Do they get a husband and a family? Do they get to live alone in an apartment with three cats and boxes of wine? These things should be taken into consideration, but I don’t think it will happen.