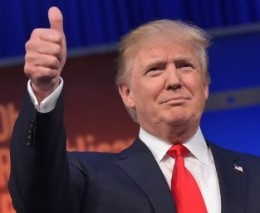 Hunter Wallace has declared war on President Trump. He’s not the only one, of course, but he’s by far the most articulate. Hunter and I have had a rocky relationship over the years, but I read his work regularly, and I know his mind is open to change, so I would like to encourage him to rethink his position on this. I think it is self-defeating.

Four years ago, when Donald Trump glided down the golden escalator at Trump Tower and declared his candidacy for President of the United States, he broke the Republican gentleman’s agreement never to talk about the negative consequences of immigration and globalization.

Trump’s America First, National Populist stances on immigration, globalization, and foreign policy resonated with millions of Americans: Republicans, independents, and even Democrats. Enough to win him the nomination and the Presidency.

But, as I never tire of pointing out, Trump did not have to take these positions to win. The whole system is premised on not giving the people what they want. Trump could have played by the system’s rules. Trump could have xeroxed the Jeb! platform and still won, based simply on his celebrity, money, and personality. In fact, it would have been easier for Trump to win that way, because by running a National Populist campaign, he had to fight a two-front war against Hillary Clinton and the Republican Party/Conservative Inc. establishment.

When a man pays a huge price to campaign on issues that he didn’t need to win, that tells me that he is sincere. That’s why I believed Trump could save America. That’s why I did everything in my power to get him elected.

So what happened to the Trump presidency? Obviously, he encountered forces stronger than his convictions about what is necessary to save America. Many of these forces are external. Blackmail cannot be ruled out. Historians will be puzzling out the enigma of Trump well into the next century.

Donald Trump is a tragic figure in the true sense of the word. We are witnessing the terrifying spectacle of a man of genuine greatness failing because of his own grievous faults. Vanity is clearly one of them, including a willingness to settle for appearances rather than substance. Lack of moral seriousness is another. But probably the worst is anti-intellectualism, which led him to adopt principles that are incompatible with America’s survival and his own better instincts. Principles like the civic nationalist creedal conception of American identity, or the idiotic notion that America would be enriched by jihadis, MS-13 members, and millions upon millions of Shitholians, if only they came here legally.

The tragedy of Trump is also the tragedy of America: the downfall of a genuinely great nation because of its own fatal flaws. I fear that there are not enough serious men left in America to save her.

Trump was not the last chance for white people in North America. But he was the last chance to salvage the United States of America, from sea to shining sea. For more than half a century, the Left has been scheming to create a one-party Democratic dictatorship by flooding the country with black and brown people, who vote disproportionately for Democrats.

If Trump had built the wall, deported millions of illegal aliens, eliminated systematic Democratic voter fraud, and reversed white demographic decline, he could have saved America as a prosperous, First World country. He could also have saved the American system of two-party democracy.

But Trump failed. Trump will be the last Republican President. And he will be a one-term President. Already, there are probably not enough sane white people in America to reelect him. What comes next is a Democratic one-party state that will resemble Mexico: a violent, corrupt, squalid, and socialistic non-white society ruled by a tiny white and Jewish elite of ultra-rich sociopaths mouthing Left-wing slogans.

Imagine a Beto stamping on a brown face, forever.

There is, however, still a chance to avoid that. It is a slim chance. But it is worth taking. White Nationalists could rally the nearly 60 million people who voted for Trump and begin the process of creating a homeland for whites in North America.

Only a few people learn from history. Even fewer learn from reason. Most people learn only from experience, and the most vivid lessons come from suffering. White Nationalists have been warning our people for years that our livelihoods, our nation, and our future are being stolen from us through race replacement immigration, which not only reduces wages and wrecks communities but is also a form of demographic gerrymandering.

Demographic displacement invalidates democracy. The whole point of democracy is to make the elites serve the interests of the people. If the elites fail the people, the people dissolve the government and elect a new one that will faithfully serve their interests.

Democracy becomes a sham when elites conspire to stay in power by rigging elections. One form of election-rigging is to stuff ballot boxes with fake votes. Another form is to register people who are not qualified to vote, including dead people and non-citizens. (It is tragic that many people will vote Republican their whole lives, then die and become Democrats.)

But the most insidious form of election tampering is for the government to dissolve the people and elect a new one through demographic replacement.

But when America becomes a banana republic, and democracy becomes an obvious sham, then why should white Americans abide by the results? Why should they allow their nation to be stolen from them? Why shouldn’t they take it back?

Now I have a serious question to pose to White Nationalists: If you want our movement to be in a position to mobilize the Trump electorate and turn it into a genuinely revolutionary National Populist movement, what should our stance be today and going into the 2020 election?

Should we openly declare war on “Blompf”? Should we pour scorn on the “boomers” and “normies” who still support him? Should we announce our intention to tip the 2020 election to the Democrats?

Believe me, folks, I understand the temptation. The A$AP Rocky fiasco is surely one of the most surreal and undignified episodes in the history of the American Presidency. And I understand why the Left would like to exploit the El Paso massacre to grab power, but it boggles the mind that Trump and the Republicans are basically willing to throw power away, undermining the First and Second Amendments merely to appease raving lunatics who think anyone to the Right of Hillary Clinton should be censored, disarmed, and eventually replaced by brown helots.

But how, exactly, would declaring war on Blompf qualify us to rally the dejected and disillusioned Trump electorate? Wouldn’t they simply regard us as their enemies, who collaborated in their dispossession? Wouldn’t they be right to do so?

The wignats met their Waterloo in Charlottesville and the subsequent “optics wars.” Their organizations have collapsed, and they are trying to rehabilitate themselves on YouTube, Twitter, and various blogs by competing to issue the most strident and embittered denunciations of Donald Trump and the American Nationalists who trounced them in the optics wars.

But wignat self-indulgence gets us nowhere.

What should White Nationalists do about Trump? First of all, we need to understand the battle we are in.

To win their support, we cannot simply lump Trump with the political establishment. For one thing, it isn’t true. He is still at odds with the establishment, and when he gets back on the campaign trail, he will provide us with new opportunities to reach and radicalize the electorate. Thus we should treat Trump as still in play, because his electorate is very much in play.

When we criticize Trump, however, it is best to make it clear that all of his errors come from listening to the establishment rather than to the people and to his own political instincts. Given everything Trump has done for us in overturning the Republican consensus on nationalism and populism, I think we at least owe him the courtesy of holding out hope that somewhere, deep inside, he is still better than the establishment he is now slow-dancing with.

If we take this course, Trump voters will increasingly trust White Nationalists as the people who best articulate the National Populist vision they hold in their hearts. That will put us in the position to take up the National Populist standard when Trump goes down to defeat. But to win this game, we have to be in play as well.

If we take the wignat course, however, the Trump electorate will simply regard us as immature, petulant, self-marginalizing Never Trumpers who openly advocate handing the nation over to Elizabeth Warren or Kamala Harris. Once we have dug ourselves into that hole, how exactly are we going to connect with the people we need to lead?

American White Nationalism is far more likely to win the battle for a white homeland than anti-American forms of White Nationalism. The white Americans who lean toward white identity politics, even implicitly, overwhelmingly vote for the Republican Party. They also tend to be conservative and patriotic. They identify with America and feel a strong attachment to American symbols.

Like everyone else in our society, they have been miseducated about America’s nature and history and think it was founded as a color-blind propositional nation.

But they are also increasingly aware of the catastrophic consequences of diversity. Thus as white demographic displacement accelerates, these Americans will become increasingly receptive to our account of America’s real identity, how our country has been hijacked by hostile aliens, and how we can Make America White Again.

By contrast, anti-American White Nationalists will have to convince our people of all the same facts about race, diversity, and demographic displacement. But, as if that were not already enough of an uphill battle, they will also have to sell Americans a raft of anti-American ideas: cranky conspiracy theories about Freemasons, Southern Nationalism, and the like. The anti-Americans will also have to convince Americans of a whole host of historical revisionist theses about the Civil War, the Third Reich, and the Holocaust, none of them really necessary for white survival in America. Finally, the anti-Americans will have to explain away their use of symbols which are at best alien to Americans and at worst are freighted with highly negative connotations.

The inevitable wignat answer is that embracing American Nationalism and refusing to alienate the Trump electorate is merely inauthentic pandering to “normies,” whereas they are authentic and only speak the truth. Of course this is sheer pretense. Every wignat disaster from Hailgate to Charlottesville springs from pandering to — or embracing — the false premise that the only authentic form of National Populism is neo-Nazism. But being a neo-Nazi in America today is not authentic. It is totally fake. It is a symptom of rootlessness and alienation, not a solution to them. So the real choice here is pandering to 60 million normal people — or a cringy fringe of freaks.

I have no doubt that Trump will lose in 2020. In fact, I think he will lose with or without the wignats. So I have a message to Hunter Wallace: You are powerless to affect the outcome of the election one way or another. But something is in your power: You are a talented polemicist and propagandist. You can change minds. You can either help build up White Nationalists as the natural leaders of American National Populism after Trump — or you can continue down the road toward irrelevance. Choose wisely.