Lovecraft’s At the Mountains of Madness 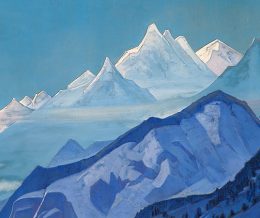 H. P. Lovecraft’s novella At the Mountains of Madness, serialized in Astounding in 1936, is one of his greatest works. The tale recounts an expedition to Antarctica in 1930 in which scholars from Miskatonic University stumble upon the ruins of a lost city. Their examination of the site paints a vivid picture of this once-great civilization, whose history reflects Lovecraft’s own political and social views.

Lovecraft had a lifelong fascination with the Antarctic and was an avid reader of Antarctic fiction. Among the books that influenced him were W. Frank Russell’s The Frozen Pirate, James De Mille’s A Strange Manuscript Found in a Copper Cylinder, and Edgar Allen Poe’s novel The Narrative of Arthur Gordon Pym of Nantucket (the conclusion takes place in the Antarctic), from which he borrowed the cry of “Tekeli-li!”

The story is narrated by William Dyer, a geology professor at Miskatonic University and the leader of the expedition. The purpose of the expedition is to collect fossils with the aid of a high-tech drill invented by an engineering professor at the university. Along with more typical findings, they detect a triangular marking imprinted upon fragments of rock. Dyer claims that this is merely evidence of striations, but a certain Professor Lake unearths more prints and wishes to follow their lead.

A group led by Lake sets off to investigate the source of the prints and discovers the remains of fourteen mysterious amphibious specimens with star-shaped heads, wings, and triangular feet. They are highly evolved creatures, with five-lobed brains, yet the stratum in which they were found indicates that they are about forty million years old. Shortly thereafter, Lake and his team (with the exception of one man) are slaughtered. When Dyer and the others arrive at the scene, they find six of the specimens buried in large “snow graves” and learn that the remaining specimens have vanished, along with several other items. Additionally, the planes and mechanical devices at the camp were tampered with. Dyer concludes that the missing man simply went mad, wreaked havoc upon the camp, and then ran away.

The following day, Dyer and a graduate student named Danforth embark on a flight across the mountains. The two discover a labyrinthine ancient megalopolis consisting of gargantuan fortifications and dark, titanic stone structures of various shapes (cones, pyramids, cubes, cylinders). Upon entering “that cavernous, aeon-dead honeycomb of primal masonry” through a gap left by a fallen bridge, they find that the interiors are adorned with intricate carvings chronicling the history of the city. They realize that the city’s inhabitants must have been the “Old Ones” (more precisely, the Elder Things) extraterrestrial beings described in the Necronomicon.

The Old Ones were highly intelligent creatures who possessed advanced technology and had a sophisticated understanding of science. They came to the Antarctic Ocean from outer space soon after the moon was formed. They were responsible for the creation of shoggoths, “shapeless entities composed of a viscous jelly which looked like an agglutination of bubbles.” The shoggoths were unintelligent, slavish creatures designed to serve the Old Ones, who controlled them through hypnosis.

The Old Ones warred with Cthulhu spawn until Cthulhu cities (including R’lyeh) sank into the Pacific Ocean. The invasion of a species called the Mi-go during the Jurassic period prompted another war in which the Old Ones were driven out of northern lands back into their original Antarctic habitat.

Over time, the civilization of the Old Ones began to enter a dark age. The shoggoths mutated, broke their masters’ control over them, and rebelled. The carvings also allude to an even greater evil hailing from lofty mountains where no one ever dared to venture. The advent of an ice age that drove the Old Ones to abandon the city and settle underwater cemented their slow demise. For the construction of their new settlement, the Old Ones simply transplanted portions of their land city to the ocean floor, symbolizing their artistic decline and lack of ingenuity.

The carvings of the Old Ones became coarse and ugly, a parody of what they once had been. Dyer and Danforth attribute their aesthetic decline to the intrusion of something foreign and alien:

We could not get it out of our minds that some subtly but profoundly alien element had been added to the aesthetic feeling behind the technique—an alien element, Danforth guessed, that was responsible for the laborious substitution. It was like, yet disturbingly unlike, what we had come to recognize as the Old Ones’ art; and I was persistently reminded of such hybrid things as the ungainly Palmyrene sculptures fashioned in the Roman manner.

The squawking of a penguin beckons Dyer and Danforth to a dark tunnel, where they find the mutilated bodies of Old Ones who were brutally murdered and decapitated by shoggoths. They are covered in thick, black slime, the sight of which imparts Dyer with cosmic terror. He and Danforth flee the site and climb aboard the plane. Danforth glances backward and comes face-to-face with something so horrifying that he has a nervous breakdown and becomes insane.

. . . monstrous and nebulous adumbrations of the pithecanthropoid and amoebal; vaguely moulded from some stinking viscous slime of earth’s corruption, and slithering and oozing in and on the filthy streets or in and out of windows and doorways in a fashion suggestive of nothing but infesting worms or deep-sea unnamabilities.[1]

The Old Ones, despite being extraterrestrial beings, do not represent alien horrors. By the end of the book, Dyer exclaims, in awe of their civilization: “Radiates, vegetables, monstrosities, star-spawn—whatever they had been, they were men!” The great evil glimpsed by Danforth is the same evil feared by the Old Ones, and it is that which is embodied by the shoggoths.

Even the realization that the Old Ones slaughtered Lake and the others does not change this perception. When Dyer finds the corpse of the missing explorer (and his dog), he takes note of the care with which the Old Ones dissected and preserved the corpse. He admires their scientific approach and compares them to the scholars they killed.

The fact that the Old Ones’ demise was caused, in part, by their failure to subjugate the shoggoths could be a commentary on the horrors let loose by the emancipation of black slaves in America, or perhaps on Bolshevik revolts. The idea of a golem revolt also has a modern-day parallel in the possibility of malign artificial intelligence (see the paperclip problem).

That said, Lovecraft is not particularly concerned with how the Old Ones’ decline might have been averted. He shares Spengler’s view that civilizations are comparable to organisms and pass through an inevitable cycle of youth, manhood, and old age.

Spengler’s theories about history had a strong influence on Lovecraft. He read the first volume of Decline of the West in February 1927. In 1928, he remarked:

Spengler is right, I feel sure, in classifying the present phase of Western civilisation as a decadent one; for racial-cultural stamina shines more brightly in art, war, and prideful magnificence than in the arid intellectualism, engulfing commercialism, and pointless material luxury of an age of standardization and mechanical invention like the one now well on its course.[2]

In another letter, he writes: “It is my belief—and was so long before Spengler put his seal of scholarly approval on it—that our mechanical and industrial age is one of frank decadence; so far removed from normal life and ancestral conditions as to make impossible its expression in artistic media.”[3]

The word “decadent” appears many times in At the Mountains of Madness. While the oldest structure they encounter exhibits an artistry “surpassing anything else,” the later art “would be called decadent by comparison.”

Lovecraft’s description of the Old Ones’ government as “probably socialistic” reflects his growing disillusionment with laissez-faire capitalism. He may have been influenced by Spengler in this regard as well. He uses the term “fascistic socialism” in A Shadow Out of Time.

Another influence on At the Mountains of Madness was the Russian painter, archaeologist, and mystic Nicholas Roerich. Roerich is mentioned numerous times throughout the book, and Lovecraft’s prose is evocative of his haunting landscapes. One passage in particular brought to mind Roerich’s Path to Shambhala: “Distant mountains floated in the sky as enchanted cities, and often the whole white world would dissolve into a gold, silver, and scarlet land of Dunsanian dreams and adventurous expectancy under the magic of the low midnight sun.”

The ending of the book contains a harrowing portrait of one of Lovecraft’s most terrifying creations. The eldritch horror of the shoggoth represents, in distilled form, modernity and its pathologies. “Its first results we behold today,” he wrote in 1928, “though the depths of its cultural darkness are reserved for the torture of later generations.”[4]