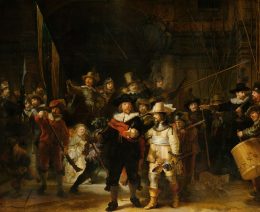 Today, Amsterdam’s Rijksmuseum will begin its restoration of Rembrandt’s The Night Watch, or Militia Company of District II under the Command of Captain Frans Banninck Cocq (1642). It is the largest research and restoration project the Museum has undertaken and will last several years. The process will be broadcast live online.

The restoration of The Night Watch is one of several events and exhibitions [2] in 2019 commemorating the 350th anniversary of Rembrandt’s death. From February 15 to June 10, the Rijksmuseum displayed their entire Rembrandt collection: twenty-two paintings, sixty drawings, and more than three hundred prints (high-resolution images of the Rembrandts in their possession are available on the museum’s Website [3]). From October 11 to January 19, they will display Rembrandt and Velázquez paintings side-by-side (alongside other Dutch and Spanish masterpieces). The Mauritshuis will also be displaying its entire Rembrandt collection until September 15. The British Museum will be displaying sixty-five prints and drawings by Rembrandt until August 4, and the Museum De Lakenhal will be displaying early works by Rembrandt from November 3 to February 9. There is also a new biography of Rembrandt in print: Jonathan Bikker’s Rembrandt: Biography of a Rebel.

In the first stage of the project, researchers will map the surface of the painting to discern what it originally looked like and how it was created. After the data is analyzed, they will proceed with the restoration.

The last time The Night Watch was restored was in 1976, after a man attacked the painting with a bread knife. Incidents of vandalism also occurred in 1911 and 1990. Prior to the 1976 incident, the painting had last been restored at the end of the Second World War. The dark varnish covering the painting was removed, revealing that the scene depicted was actually not meant to be at nighttime.

The Night Watch was commissioned by Captain Frans Banninck Cocq and his militia for the great hall of the Kloveniersdoelen, a shooting range and meeting place for a faction of the schutterij, or civic guard, of Amsterdam. Cocq is shown at the center of the painting; to his right is his Lieutenant, Willem van Ruytenburch.

The purpose of the civic guard was to defend the city. For every twenty thousand inhabitants of a town, there would be six hundred schutters. In Amsterdam, they were divided into three groups according to the weapons they carried. The Kloveniersdoelen was the musketeers’ designated headquarters, the Handboogdoelen was for longbowmen, and the Voetboogdoelen for crossbowmen. During times of peace, the militias’ function was to maintain order and participate in official ceremonies. They also provided opportunities for men to socialize with each other. In times of war, the men fought in battle. Many died defending Haarlem when it was besieged by an army of Philip II of Spain from 1572 to 1573.

It was customary for militias to commission group portraits to be displayed in their respective headquarters. Portraits of militias (and of regents of other civic organizations) feature prominently in Dutch Golden Age painting.

Frans Hals, The Officers of the St. George Militia Company in 1639

Rembrandt’s portrait deviates from convention in that the subjects are not positioned in an orderly formation and are shown in motion, about to set off on a mission. The standard-bearer raises the flag, the drummer starts playing, and the other men prepare their weapons. One man is loading his arquebus; another is cleaning his. A third man behind the Captain fires a shot. The drama of the painting is enhanced by the strong contrasts between light and dark (chiaroscuro). It is also a work of colossal proportions, measuring about ten by fourteen feet. Before the painting was trimmed upon being transferred to the Amsterdam Town Hall, it measured about thirteen by sixteen feet.

It has been said that the unconventional nature of The Night Watch was widely condemned, but this is not the case (though some subjects were not pleased that they were not displayed prominently). Rembrandt received 1,600 guilders for the work. Cocq had a watercolor copy made for his family album, and the artist Gerrit Lundens painted a smaller replica of it.

Amid the chaos of the painting, the viewer’s eye is led toward the Captain and the two illuminated figures flanking him. The arquebuses and pikes point toward the central figures. The Captain, with his outstretched hand, is shown leading his men forward. In his other hand, he holds a glove, which could reflect a readiness to “throw down the gauntlet” and fight. The shadow of his left hand falls upon the coat of the Lieutenant; between his thumb and fingers is a lion and three crosses, recalling the coat of arms of the city of Amsterdam. (This is a particular point of emphasis given that the position of the shadow does not match the angle indicated by the shadow of the Captain’s leg.) This symbolizes the militia’s loyalty to the city and their commitment to defending it.

The identity of the young girl on the Captain’s left is unknown. She functions as something of a mascot in the painting. Around her waist are two symbols of the militia: a gunpowder bag and a chicken. The militia’s coat of arms featured a chicken’s claws. It is perhaps significant that the standard-bearer is directly above the girl, symbolizing the imperative of defending the country for the sake of future generations. To the girl’s right is the man firing his arquebus. The oak leaves on his helmet connote victory and heroism.

One Jewish academic interprets the girl as an ironic device employed “as a challenge to the sitters’ manhood,” and that she is mocking their incompetence as soldiers.[1] [5] He points to the contrast between their high-end accoutrements and their lack of coordination as evidence that Rembrandt was subtly making fun of them. He forgets that Rembrandt was not a Jew. The Night Watch is not a parody of hapless posers, but rather a manifestation of Rembrandt’s populist streak and his mission to portray “the greatest and most natural movement.”

It’s hard to behold The Night Watch and not come to the conclusion that Rembrandt sees humanity and dignity in the militiamen. One critic remarks:

What Rembrandt represents here is not the noisy chauvinism of the pretentious, but the healthy and sane activity of an armed community determined to perpetuate itself. The protection of one’s own life and property involves the defense of one’s family and one’s heirs; it reaches out even further to include, first, friends and neighbors; then the home town; and finally those wider ties which destiny has linked with our history and which we call our native land, for this too has always been the ancestral and hereditary property of every citizen. The balanced well-being of the individual is all the more secure, the greater and the wider the base upon which it rests. On old Dutch ducats there appears the symbol of a man with a sheaf of arrows. A single arrow is easily broken, but bound up with others it helps to form a shaft of great resistance.[2] [6]

When The Night Watch was painted in 1642, The Netherlands was still a young nation and had yet to be officially recognized. The first Dutch nation-state, the Dutch Republic, was formed in 1581, fourteen years after the outbreak of the Dutch Revolt led by William I of Orange, which marked the beginning of the Eighty Years’ War. The Dutch national anthem, the “Wilhelmus,” dates back to this period. William was declared an outlaw by Spain and was assassinated in 1584. Spain continued to attack Dutch territory, and the Dutch Republic was not officially recognized as an independent nation until the signing of the Treaty of Münster in 1648.

The tables turned in the latter half of the war (which merged with the Thirty Years’ War), and the Dutch experienced a string of victories. The militias’ function was largely ceremonial by the time the Eighty Years’ War came to a close, so the men in The Night Watch would not have seen fighting. But the exact circumstances of the painting are not particularly significant, because The Night Watch is more than a mere group portrait. It is a representation of the populist spirit of the Dutch Revolt and the generations of Dutchmen who defended their cities. In the words of Pieter Roelofs [7], curator of seventeenth-century Dutch painting at the Rijksmuseum, “It’s much more than just a painting. It stands for the country as a whole.”