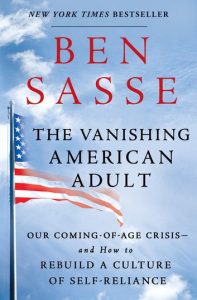 Ben Sasse
The Vanishing American Adult: Our Coming-of-Age Crisis – and How to Rebuild a Culture of Self-Reliance
New York: St. Martin’s Press, 2017

Senator Ben Sasse (R-Nebraska) has come out with a book that is needed and should be taken seriously by any Rightist. This is because Senator Sasse has had an extraordinarily successful career. At the tender age of 37, he was called in to help turn around a struggling university as its President, and he did just that, before moving on to politics.

It was at that struggling university – Midland University in Fremont, Nebraska – that Sasse discovered a problem with the young: college-aged people no longer act like adults. They are helpless and passive in the face of very simple challenges. Essentially, students are arriving at universities unprepared for the real world. He first observed this when a group of paid student workers decorated a Christmas tree only up to the level they could reach. Nobody thought to get a ladder from the supply closet nearby to decorate the top. Later, a student staged a sit-in at the President’s office to get a minor scheduling problem that he had created himself fixed by none other than the University’s President. Finally, he had to fire an employee after she continuously left early. The woman had been given a final warning not to do this, but apparently didn’t realize that this also applied to leaving early to attend a Pilates class. (It’s a wonder that Sasse didn’t blow his top at any of these people. He seems to have kept his cool.) 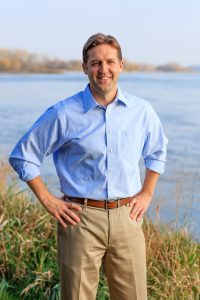 There is also the Snowflake phenomenon. A Snowflake is a college-aged individual who needs a “safe space,” and must be protected by “trigger warnings” when something difficult, challenging, or unexpected comes up. Snowflakes react to minor phrases that have come to be called “microagressions.” These microagressions are now seen by many as akin to a physical assault. Thus, you need a trigger warning in case you think there might be a microaggression, or a Snowflake will need to go to a safe space to recover afterwards. Carrying out normal activities involving responsibility has come to be called “adulting” by the rising generation, thus implying that such things are separate from one’s “real” life of playing video games and being on one’s smartphone.

Before proceeding further, the following are what Senator Sasse calls the Markers of Adulthood:[1] [3]

Senator Sasse also describes the obvious reality of the world that all adults must face:

The crank in me wants to underscore the obvious truth that the real world isn’t going to offer any trigger warnings or safe spaces, so you’d better learn how to deal – and just leave it at that. But more importantly, the lover of knowledge and country in me aches that we are forgetting that a life well lived, that basic participation in the modern knowledge economy, and that the future of our democracy all depend on an open and unfettered intellectual climate.[2] [4]

Sasse argues that there are several factors preventing children from maturing. The first is what he calls “schooling.” What he means by this is the very long education track that almost all people of the middle class and above are on. He attributes this social development to John Dewey, an educator and philosopher of great renown – but he never said anything succinctly, so he is rarely quoted. What he did achieve was to develop the modern school system. This system is flawed in that it neither teaches the young to explore the larger issues of life – such as religion or the great philosophers – nor does it train people for an actual working trade. It is thus “schooling,” and not education.

Schooling does another insidious thing: It segregates people by age. This creates several problems. The first is that children are not learning about the life challenges people face in the various phases of their lives. Childbirth is a mystery, and nobody is prepared for the frailty of the elderly. Likewise, managing the ups, downs, and long dull spells of a long-term marriage is never addressed. In short, schooling makes it difficult to pass on civilizational wisdom, and it’s locking youngsters into a bubble of immaturity and lingering adolescence that is hard to get out of. The next problem is that the young are insulated from work. He very ably describes the difficulty youngsters have of eventually breaking into the economy. Apparently, when he retweeted his daughter’s experiences of working on a Nebraska ranch, he was contacted by lawyers about violating child labor laws. Labor-free childhoods help create the passive “adult.”

Sasse argues that breaking this cycle requires several changes in approach. The first is simply to do the opposite of what is happening: Kids need to be taken out of age-segregated environments and allowed to mingle with their elders, including young mothers. The young must be made to understand the body’s cycle of birth, growth, reproduction, old age, and death. The next is to give children the experience of hard labor. Sasse displays his regional and ethnic Nordic Nebraskan origins here. He talks about the Homesteaders, the Puritan founders of New England, and the Scandinavian immigrants to the prairies a great deal. He also relates stories about his Second World War-era grandparents. Sasse argues that one should travel to places in the world where air conditioning is an unheard-of luxury, try to do some good there, and thus gain a better appreciation for what one has. He argues that one should build a bookshelf and raise your kids as though they will rule someday. And he then makes a last recommendation which I’ll discuss below in depth. It’s his weakest idea.

Sasse offers the following his list of books for his bookshelf, by category:

(Personally, I really enjoy Bruce Catton’s works on the US Civil War, but I’ve switched my reading to focus on bringing about the white ethnostate through revolutionary metapolitical action.)

Sasse’s ideas become problematic when he suggests to “make America an idea again.” Sasse believes himself to be squarely in the respectable middle of the political spectrum and a basic Republican of the George H. W. Bush variety. He’s been praised by the National Review, and is very likely a fan of George Will’s philosophy of cuckservatism. Thus, you can say he’s missing out on a few things. His weakest concept is “Making America an Idea Again.” The problem with this is that America isn’t an idea; it’s a flesh-and-blood nation which represents a fusing of Europe’s children. Unfortunately, this nation has a North and South that’s sometimes hard to unite, but it’s still a nation with a particular DNA. No law, declaration, text, or speech by anyone can change this. Additionally, America’s ideas change over time, and really only transmit to whites.

In other words, Ben Sasse is most certainly not interested in the Racial Holy War[4] [6] – but the Racial Holy War is interested in him. He fails to realize that all his talk about the Puritan founders, the Homesteader Pioneers, and the Scandinavian immigrants whom the Puritans’ children married on the High Plains of Nebraska have nothing to do with America’s non-whites. There is no connection between the careers of John C. Frémont – a white soldier, explorer, and all-around dynamic figure – and Frederick Douglass, who sought handouts for blacks, other than a shared interest in abolitionism. The Snowflake phenomenon of “trigger warnings” and “microaggressions” are not generational things as much as a strategy by non-whites to wage Racial Holy War. The sit-ins, the entitlement, the weeping – these are the tactics of the non-white grifter in their interactions with our civilization. Their ultimate strategy is to gain material and social benefits by morally blackmailing a dispirited white population.

I’ll add that, as a society, we need to connect sex to procreation again – especially among those whites who are in the middle class and above. This means getting women married at younger ages and off birth control, while encouraging the opposite for non-whites. Some of Sasse’s ideas about age segregation apply here. Essentially, 19-year-old girls are ready to marry and bear children, but 19-year-old boys still need to set up their careers. Younger girls thus need to meet older boys and men. The interactions between the sexes should be courtship, not hookups. F. Roger Devlin’s ideas in his Sexual Utopia in Power [7] need to be shouted to the skies by people like Sasse, but the Senator seems willing to let Amazon’s ban of that book and others continue.

I really enjoyed this book and recommend it be given as a gift by parents and grandparents to youngsters. Indeed, Sasse’s Puritan heritage and Homesteader story is not so different from my own. I strongly connected to his personal stories and analogies. And his hypothetical “If Roosevelt Spoke to a Graduating Class” at the end of the book is really an excellent speech that one wishes could be given today. It closes with these words:

You must do meaningful work.

You must understand history and the debt you owe to your forebears.

You must understand your world and your place in it.

You must wrestle with ideas.

You must not shirk or slack off. You must work. For the fate of the Republic depends on you.

Oh, and again, you must play hard as well.

[4] [12] An idea I drew from this book was that Racial Holy War is made easier to wage for non-whites once upper-middle class whites are out of the labor pool and preoccupied with extended “schooling.” Extended “schooling” creates a demand for immigrants to fill the void, and then fewer whites are making money.