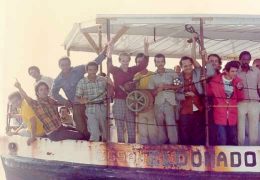 Our goal this year is to raise $100,000 in order to expand our efforts to build a metapolitical vanguard for White Nationalism. So far, we have received 116 donations totaling $21,003.92. We set our goals high because the task we have before us is formidable, but not impossible. Right now, we are on track, but we need your help to reach the finish line!

I came to join the “racist,” racial Right the hard way. I’ve seen non-white violence. It’s been up close and personal. I was a kid in Miami during the Cuban refugee screw-up in 1980. The place went nuts. My parents installed one-way tinted windows on our house. Getting deadbolts and stronger doors was a big event; I remember covering my ears as the workmen did their noisy drilling. I also remember the agonizingly boring (for a kid) search for a “good school” – then not knowing what that really meant. Everywhere in Miami that year, there was real, tangible, justifiable fear. On one occasion, some non-whites on the side of the road even pointed a gun at us as my family was driving past on our way to church.

We left Miami a year later, but in today’s post-“civil rights” world, you can’t run from the darkness, since it’s everywhere – and sponsored by governments and corporations. When I was in the fifth grade, I had to chase away a non-white would-be burglar from our house with a BB gun while my parents were away. I was in many fistfights at my “vibrant,” racially-mixed school. When I was in the military, much of my time was spent managing non-white social pathologies. I had to deal with the socio-legal fallout from gangsta-style drive-by shootings and dindus out for a night of wilding. The problems with soldiers that are both non-white and non-Afro, such as native Hawaiians or Orientals, are often even more difficult to deal with. I’ve also exchanged gunfire with Muslim Arabs. I took a big dose of the “red pill” in Iraq when I dismissed a black soldier with fifteen more years of experience for incompetence – and the problems in my unit vanished the instant he was gone.

Don’t take the above to be a trite boast. This has all been unpleasant. Because of these experiences, I always have a feeling of anger and frustration banging around my inner self that comes out on occasion in unhelpful ways. In fact, sometimes I’d love to eat the lotus and be etherized and drugged enough to believe that inside of every Slope Head there is an American trying to emerge. In this hallucination, I imagine I could see the cute little pickaninnies hold hands with the blond-haired white kids while singing songs about Jesus Christ personally buying each person on the planet a carbonated, sugary drink. I’d really like to have the moral certainty of the white schoolmarm who actually thinks “white supremacists” are America’s biggest problem, even as she clutches her purse tighter when two young black bucks swagger by with their pants sagging.

But I can’t be deluded. I won’t misread data. Lyndon Baines Johnson’s Jewish-led “civil rights” agenda didn’t work; it created burned wreckage shrouded in a thick fog of tear gas. One must look at the data and draw the right conclusion, and the conclusion led me to the “racist,” radical Right. What to do after joining a group of outcasts? Well, I write, and I write for the greatest intellectual webzine on the Internet.

So what do you get from giving money to Counter-Currents? You’re helping the preservation of Old Rightist ideas, as well as promoting New Rightist ideas.

One of my hobbies is studying history. I caught the fever after I visited an old Spanish fort when I was 8. I began by reading about the battles and wars in those 1950s-style history books for young teens. Descriptions of the battles in these books are filled with naïve and comforting clichés that are fun to read, but which describe events that are not fun to actually experience. In these yellowing pages, the brave American men fought “hand-to-hand,” and then “dug in” and “waited for reinforcements.” This led me to read about the political policies which led to a group of American 18-year-olds battling it out with complete strangers on a hillside in a faraway land. Then, as I looked for an even deeper understanding, I eventually gets to the world of ideas. Indeed, ideas are everything. One discovers that concepts which were first expressed in France in the 1790s is what led to American boys engaging in “hand-to-hand” fighting in the Korean mountains in 1950.

In mainstream society, Leftist ideas are proselytized everywhere. I learned more about Marxist theory than anything else in school, and that was when the Communist bloc was literally crumbling before the eyes of the whole world. After becoming a “racist” follower of the “radical Right,” I came to discover that Rightist ideas have been there all along. Indeed, while the classless utopia of Marx never arrived, Rightist ideas have often been applied with great success. Think of the Reagan presidency: While the Gipper did make the amnesty mistake, he really did beat the Jacobin monstrosity that was the Soviet Union. Many of Reagan’s policies came from ideas discussed by John Owen Beaty in his book, The Iron Curtain Over America (1951). After reading Beaty’s classic, Reagan’s presidency comes into sharper focus. For example, the reasons for Reagan’s controversial visit to the Bitburg cemetery in 1985 [2] become very clear. (If you read Iron Curtain yourself, you’ll understand it, too.)

Counter-Currents is the place where you can find all sorts of Rightist ideas in a single place. If one spends time looking through this Website’s archives, you can learn about the lives and ideas of Alain de Benoist, Sam Francis, Madison Grant, Revilo P. Oliver, William Luther Pierce, Wilmot Robertson, Lothrop Stoddard, Dominique Venner, Francis Parker Yockey, and many others.

Counter-Currents is also where new Rightist ideas are developed. I’ve personally put forward the lessons learned from my own life from a Rightist, pro-white perspective. Others have written deeply spiritual essays for this site. There are several who have written accounts of their personal and family lives in such a way that they draw profound conclusions about life and society from them. These musings require a forum. You certainly won’t find such things anywhere else.

Here you can also find the best analyses of modern culture. It’s well-known that much of Hollywood is a moral sewer. However, Counter-Currents analyzes film in a manner that cuts away the nonsense. Spend an afternoon reading the many movie reviews to be found here. The reviews of Scarface, Pulp Fiction, and Fight Club are the gold standard for movie reviews anywhere. Because Counter-Currents is so “far” to the Right, there is freedom here to express ideas that can’t even be approached anywhere else.

Most importantly, however, by supporting Counter-Currents, you will change the world. Let me give an example. When I was a kid in Miami in 1980, we were helpless in the face of a deliberate effort by a Communist tyrant to damage America by inflicting a refugee wave upon us consisting of criminals, mental defectives, and non-whites. But we had no body of ideas we could call upon to understand the crisis before it got as big as it did. Similarly, today, the flotsam of Central America’s banana republics are trying to enter the United States, but there is resistance. The will to stop this invasion didn’t come from Donald Trump. It came from ideas developed since 1980, such as Peter Brimelow’s 1995 classic Alien Nation – as well as sites like Counter-Currents. Now we are better prepared to deal with the threat than we were in 1980.

Moreover, we have a better Right today. Counter-Currents doesn’t just deal with immigration, but looks at the entirety of human endeavor. I believe that what we are writing today will positively influence events in the future. In the meantime, I keep writing, looking forward to the coming of the white ethnostate. But until then, we need funding to keep this vision alive. Help us get there.