Who Do You Want in Charge of the Internet? 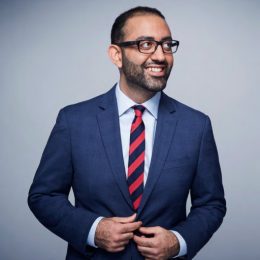 Oliver Darcy of CNN, proof that one reporter has the power to do a lot of damage to free speech.

Tech censorship is an existential threat to the Dissident Right. No serious political movement can successfully operate if it is barred from social media. Even mainstream conservatives are being threatened by this, and Big Tech may sway the 2020 election against Donald Trump. This phenomenon only continues to get worse, as the recent YouTube purge attests.

One of the few ways the Right can fight back is with state power. The free market is not going to solve this on its own. Even though many conservatives are threatened by tech censorship, they insist the government can’t do anything about it – because “muh principles.”

This delusion rose to the fore last week after one Senator proposed a state solution. Republican Sen. Josh Hawley announced a bill that would empower the government to intervene in tech censorship. Tech platforms such as YouTube and Twitter operate with protection from publisher liabilities. They can’t be sued for the illegal things users post because they are not considered traditional publishers. As outlined in Section 230 of the Communications Decency Act of 1996, one of the reasons platforms are not considered publishers is due to the impression that they act as a “forum for a true diversity of political discourse.”

Tech giants have clearly violated the spirit of that regulation, and Hawley merely wants to enforce it as written. The Senator’s bill would require all large platforms (they have to either comprise 30 million users in America, 50 million globally, or make $500 million annually) to submit to a government audit that would investigate whether they act as a neutral political forum. Failure to pass the audit would result in the loss of Section 230 protections. The bill would create a commission within the Federal Trade Commission to investigate platforms and issue rulings.

This is a sensible measure designed to enforce laws already on the books. Yet, many Conservative Inc. types are apoplectic that a Senator would dare infringe on the free market. Bill Kristol’s The Bulwark called it a “terrible, horrible, no-good, very bad internet bill.” This Never Trump publication tore its hair out in the belief that the bill would create more bureaucrats. Bulwark writer Andrew Egger admitted there are problems with Big Tech, but he thinks big government is worse. He wrote:

[Hawley] apparently lacks the cautious, pessimistic faculty that habitually has made conservatives sensitive to the way expansions of federal power can be twisted in unexpected and unsavory ways – that might stop to ask, for example, how giving yet another coalition of unaccountable bureaucrats great and opaque cancellation powers over our biggest tech companies is likely to preserve American liberties in the long run rather than to run rampant over them.

National Review’s David French reiterated the stupidity of David Frenchism with his attack on Hawley’s bill. French admits there are serious issues with Big Tech, but worries about the horror of government bureaucracies (as if they didn’t already exist). He suggests Hawley’s bill would empower Democratic administrations to suppress conservative content, and that coercion is not the answer. The answer is . . . persuasion! “I have long urged social-media companies to voluntarily adopt First Amendment-based moderation standards,” French proudly boasts, completely ignoring the fact that his request has fallen on deaf ears. He concludes his piece with the unrealistic hope that gentle persuasion will prevail. (It should be noted that the National Review Institute is funded by Google.)

Reason, naturally, whined that the bill put Washington in charge of Internet speech. And the Washington Examiner claimed it would lead to more censorship, not less. No serious alternative solution to Big Tech malfeasance was proposed in any of these articles. The critics say Hawley’s bill is worse than the problem it is intended to solve.

This position is plainly stupid. It invites tech giants to do their worst while conservatives just take it. “At least I have muh principles!” the conservative says, as the free market takes away his free speech and bank account.

Big Tech is not going to be persuaded by respectable conservatives to protect free speech. Tech execs have already been persuaded to censor speech by a more powerful force: journalists.

There was a pleasant time not too long ago – in fact, it was only three years ago – where most of the platforms allowed all kinds of speech to go uncensored. “Twitter stands for freedom of expression,” Twitter CEO Jack Dorsey said at a 2015 press conference. “Twitter stands for speaking truth to power.”

That all changed thanks to journalists who were irate over Donald Trump’s election. There were warning signs prior to November 2016 – such as Twitter banning Charles Johnson, Milo Yiannopoulos, and others. But the media campaign to persuade Big Tech didn’t see major results until after the 2016 election. Journalists shrieked that Facebook allowed fake news to go viral and did nothing as Russia swayed the election with Arm-Wrestling Jesus memes. Facebook responded by altering its algorithms to prioritize cat videos and mainstream media sources.

Every platform was accused of being a breeding ground for the Alt Right. The platforms responded by banning several alleged White Nationalists. Twitter did it in multiple bouts, and suppressed such dangerous voices as Jared Taylor. Mr. Taylor’s sin was that he promoted violence – a ridiculous charge to anyone who has ever even glanced at American Renaissance.

YouTube demonetized dozens of channels and hid hundreds of “offensive” videos. Facebook publicly announced this year that it would no longer tolerate White Nationalists, and promptly banned many non-White Nationalists, such as Alex Jones and Gavin McInnes.

Journalists have been remarkably petty in what they want censored. Tweeting “learn to code” at a journalist can now get a Twitter user suspended. This is now a rule because journalists were upset that conservatives would mock them for losing their jobs – even though dozens of outlets told blue-collar Trump voters to “learn to code” for years. None dare offer valuable advice to the world’s most important profession.

A single journalist with a vendetta can impact entire platforms. InfoWars was banned from nearly every platform due to one CNN reporter. That reporter, Oliver Darcy, asked Facebook officials at a July 2018 press conference why Alex Jones’ outlet wasn’t banned from its platform. Darcy accused the tech giant of failing to eradicate “fake news” by not banning InfoWars. That one question and CNN’s constant focus on the subject for an entire month resulted in Facebook, Apple, and others banning the network. Only one major platform did not cave, which was Twitter – at first. But only a few weeks later, Twitter banned Jones and InfoWars after he posed questions to Darcy on Capitol Hill. That somehow counted as harassment.

The recent YouTube purge was the result of one determined Vox reporter, Carlos Maza. Maza was mad the video site allowed conservative commentator Stephen Crowder to insult him – a gay Latino – on their platform. His tweet thread went viral, and write-ups in places like The Washington Post added weight to his complaints. YouTube initially refused to do anything about Crowder, but after more teeth-gnashing from the press, they demonetized him and dozens of others. YouTube also banned multiple Right-wing channels and erased hundreds of videos – including Counter-Currents.

The Google-owned service said its new rules forbids the justification of “discrimination, segregation or exclusion based on qualities like age, gender, race, caste, religion, sexual orientation or veteran status.” Google CEO Sindar Pinchai told a transgender journalist that the company would now remove “borderline content” that doesn’t violate its policies, but still may cause harm.

All of this is happening because one single journalist had a meltdown. Maza is pretty proud of his work, as evidenced by this cringe-inducing tweet:

There’s already an unaccountable outside body with cancellation power over Big Tech. It’s journalists, and they want more censorship. Maza himself is outraged Crowder has not been banned, and has used his large platform to do so. HuffPo has drawn up an extensive list of accounts that Twitter needs to ban. Journalists have demanded tech platforms immediately eliminate lame boomer parody videos because they’re “doctored.” And there are several other things journos could decide they want eliminated. They all know their pressure campaigns have the power to make Big Tech submit.

Conservatives do not have this power. They do not have the cultural and moral clout to stand up for free speech and counteract journo pressure campaigns. Their only success has been the removal of Louis Farrakhan’s blue checkmark, and that only occurred because they argued Farrakhan offended a protected minority. No tech exec is going to be persuaded to uphold First Amendment values after reading a National Review column, especially when their companies are overwhelmingly staffed by Leftists who agree with journalists’ censorious agenda.

The only thing that can counter journalist power is state power. All the things conservatives worry about it – unaccountability, power to suppress conservative content, and so on – already exists with media campaigns. A government commission, even one staffed primarily with Democrats, is preferable to antifa-linked reporters. This commission would answer to our representatives; journalists only have to answer to themselves.

Contrary to conservative fears, Net Neutrality was benign and didn’t lead to a government takeover of the Internet. In spite of it being a Democratic initiative, it did not suppress conservative content. It was largely unneeded, because it was based on unfounded fears about Internet service providers. The fears about Big Tech, on the other hand, are well-founded. Tech platforms has shown they need Net Neutrality more than the Internet service providers they dislike.

Big Tech wields incredible power in contemporary society. More Americans receive their news from social media than traditional print media, indicating their views are being shaped by the new medium. Many of them operate as monopolies, leaving the consumer with no choice but to use them. They have our personal data and sell it to other major corporations. Their power will continue to increase as more of our lives happen online.

Too many conservatives fail to acknowledge this new order, either because they actually believe libertarian fantasies or because they receive checks from Big Tech. Their favored ideas of persuasion and letting the market fix the problem will not work. Many of them may not see the problem because they feel they won’t be censored. That may be true, but their outlets won’t survive when journalists decide to kneecap the competition.

Government bureaucrats are not exactly noble heroes, but they’re far better than Left-wing journalists. Conservatives need to ask themselves who they would rather have policing the tech giants. Opposing Hawley’s bill means they want journalists to stay in charge. Supporting it indicates they want a change.

A free and open Internet can only be ensured by a power that is answerable to the people. It ain’t the free market. It’s the state.

« Toward a Right-Wing Environmentalism

What is the Metaphysics of the Left? Part One »