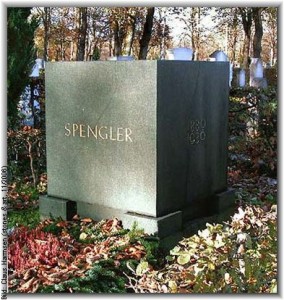 Oswald Spengler (1880–1936) is one of the thinkers most admired by the Dissident Right, yet it is obvious that this admiration largely stems from Spengler’s portrayal of Western civilization as being “Faustian” in nature, that Western man (i.e., the white man) is a seeker of the infinite, which can be expressed by analytical mathematics, instrumental polyphony, perspective painting, etc.

Very few people of the dissident right have taken the opportunity to read Spengler’s magnum opus The Decline of the West (Der Untergang des Abenlandes). This is not a criticism of our political brethren. Spengler’s work is incredibly dense and difficult, and The Decline is one of those books that is far more referenced than read. This holds true for many of those who have gained scholarly recognition as explicators of Spengler’s thinking.

A close reading of Spengler may be difficult to take for some on the dissident right. Although he is still denounced as a “fascist” by the left, Spengler detested Hitler and was declared anathema by the Nazis and was not allowed to publish shortly after the ascension to power by the NSDAP. Furthermore, Spengler’s philosophical system of cultural and civilizational development is rooted in a conscious and vehement rejection of darwinism.

Spengler regards darwinism as a mechanical and chemical process that was inadequate to explain the organic development of cultures and civilizations. The biological determinism that is a hallmark of Spengler’s writing is firmly rooted in the philosophy of organicism that was expounded by Johann Wolfgang von Goethe (1749–1832). Goethe, of course, is widely regarded as the greatest of all German writers and is best known for his monumental drama Faust (Part I 1808; Part II 1833). Goethe was also a polymath and wrote highly regarded studies in the fields of mineralogy, biology, and a theory of color that was admired by von Helmholtz.

For Goethe, the concept of fate or destiny (Schicksal) is a biological imperative. For example, an oak tree is implicit in an acorn. It cannot be otherwise. This is likewise for humans, and in Spengler’s expansion of the concept, for human societies and civilizations as well. It is Spengler’s belief that what makes the Faustian West unique is its self-awareness of its fate: “No culture is at liberty to choose [emphasis Spengler] the path and conduct of its thought, but here for the first time a Culture can foresee the way that destiny has chosen for it.”1

What is it then that Spengler foresees as the West’s fate? It is nothing less than a transcendence of everything that has been up to this point in time: “a comprehensive Physiognomic of all existence, a morphology of becoming for all [emphasis Spengler] humanity that drives onward to the highest and last ideas, a duty of penetrating the world-feeling not only of our proper soul but of all souls whatsoever that have contained grand possibilities and have expressed them in the field of actuality of grand Cultures.”2 While this may conjure up images of Zarathustra announcing the advent of the Übermensch, Spengler goes on to quote this famous line from the final scene of Goethe’s Faust: “Alles Vergängliche ist nur ein Gleichnis” (I would translate this as “All that is transitory is merely a reflection.”) Here we have a sentiment expressed that is similar to the Platonic idea of the real being an imperfect reflection of the ideal or the Christian concept of the City of Man being a corrupt and impermanent version of the City of God.

It is in this brilliant evocation of Goethe’s Faust (which in itself is a brilliant amalgamation of Classical and Christian philosophies) that Spengler reveals his philosophy of fate. Doctor Faust—like Western civilization—strives for the infinite while being simultaneously not in control of his fate. The issue that motivates the 12,111 lines of Goethe’s drama is not the result of Faust’s will-to-power but a wager between God and Mephistopheles. The joke is on the Devil. You cannot win a bet with an omniscient and omnipotent being. Faust’s salvation has already been fated for him just as Spengler views the categorical imperative of the Faustian West to pursue its self-transcendence to be something that has already been assigned to it by fate.

For Spengler, then, Western Civilization cannot evade its fate. The West is on its last legs. (Spengler estimated the end of Western Civilization to come around the year 2200.) Liberal democracy, laissez-faire capitalism, and the ludicrous worship of equality have run their course and will soon—in historical terms—be distant memories of a fallen age. Spengler’s pessimism about the end of the West is belied, however, by his—dare I say—beatific vision of the apotheosis of the West:

Solutions and panoramas as yet unimagined await the unveiling. Light will be thrown on the dark questions which underlie dread and longing—those deepest of primitive human feelings—and which the will-to-know has clothed in the “problems” of time, necessity, space, love, death, and first causes. There is a wondrous music of the spheres which wills to be heard and which a few of our deepest spirits will hear. The physiognomic of world-happening will become the last Faustian philosophy [emphasis Spengler].3

Now there’s an “end of times” that one can believe in. May we all live to see it come to fruition.