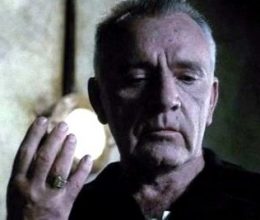 Did the international crises of 1947 and 1948 leave their mark on the writing of Nineteen Eighty-Four? I’ve spent a lot of time on this question, and so far as I can tell, the answer is – yes; but only obliquely. And George Orwell may not even have been conscious of the fact.

A couple of months into writing the first draft of the novel, he paused to do an article for the Partisan Review. This was one of an ongoing series by several authors called “The Future of Socialism.” Orwell’s contribution for the July-August 1947 issue was titled “Toward European Unity,” and it includes some recognizable themes that were finding their way into Nineteen Eighty-Four.

Actually, the piece itself doesn’t have much to say about socialism. (One of Orwell’s last essays was on Oscar Wilde’s notion of “socialism.” Like Wilde, Orwell thought it all sounded like a nice idea, but he was one of those socialists who never read Marx.) As for “European unity,” Orwell saw only dim prospects. He was much more interested in rather whimsical speculation about how the world could survive after the Third World War started and the “atomic bombs” dropped. His least favorite outcome happened to be the background to the world of Nineteen Eighty-Four. (I’ll excerpt these at the end.)

But there’s a throwaway line in “Toward European Unity” that might be an eye-opener for people today, though it was a reasonably sound, matter-of-fact assessment of the political scene in mid-1947:

. . . American pressure is an important factor because it can be exerted most easily on Britain, the one country in Europe which is outside the Russian orbit.[1] [2]

The hard fact here is that most of western Europe was slipping into the Soviet grip. Communist parties in France and Italy were getting ready to seize power, with the Communists already the largest party in the French assembly. The USSR was maneuvering to take control of the 1945 rump of Germany, by first uniting the four zones – British, American, French, Soviet – under a Sovietized “neutral” government. Meanwhile, Europe’s post-war economic recovery had stalled and backslid, largely because of the destruction of German mines and industry, and punitive reparations and deindustrialization under the still-operative Morgenthau Plan.[2] [3] France and Britain were effectively bankrupt, living on loans and remittances from the US.[3] [4]

The stage, then, was set for the wave of revolutions, wars, and brutal regimes that form the backstory to Nineteen Eighty-Four. More memorably, these conditions are the background to the American foreign policy initiatives remembered as the Truman Doctrine and the Marshall Plan. For most people, these things are mainly recalled as chapter subheadings in high school texts, or even as examples of insuperably dull, indecipherable topics best treated as punchlines to jokes. (The writer Tobias Wolff once wrote a cruelly humorous short story in which the running gag was about a job-seeking professor forced to give a lecture with someone else’s dreary paper on the Marshall Plan.)[4] [5]

What is generally forgotten these days – or more likely, unknown – is the worldwide campaign of agitprop and civil unrest that the Soviet Union mounted in 1947-48 in retaliation for the Marshall Plan. You really need to go back to the newspapers of the era to see how far and wide was the campaign’s reach. Throughout western Europe, there were riots, work stoppages, mine floodings, and anti-Marshall Plan posters, films, flyers, and newspapers. Factories and wharves were shut down throughout France for much of late 1947; in Italy, the Communists held a sit-down strike in the Parliament. Dockworkers on the Continent, in Britain, and even in Australia, New Zealand, and North America refused to unload ships.

In America, the most memorable efflorescence of the anti-Marshall Plan drive (though seldom remembered as such) was the strange presidential campaign of ex-Vice President Henry Wallace. Wallace and other “Progressives” (for such he called his party) aimed to punish President Truman and pro-Marshall Plan Democrats by splitting their vote in 1948. They did not succeed, as it rapidly became clear that these efforts were directed by the Soviet Central Committee and the Communist Party of the USA, operating through labor unions, particularly the CIO. In 1947 and 1948, Dwight Macdonald (Orwell’s friend and political soulmate) devoted many pages of his magazine, Politics, to exposés of the Stalinist machinations behind the Wallace campaign.[5] [6]

In that same paragraph from the Partisan Review piece by Orwell that I quoted above, there’s a curious and most un-Orwellian comment about U.S. trade:

If the United States remains capitalist, and especially if it needs markets for exports, it cannot regard a Socialist Europe with a friendly eye.[6] [7]

What exactly is he saying here? In all his writings, Orwell seldom, if ever, affects interest in such peripheral economic matters as trade policy. Yet here he is, professing to suspect that the “capitalist” US has a great need to expand its overseas (specifically European) markets. Now, in the late 1940s American exports worldwide comprised about five percent of its GNP.[7] [8] That is, most of the GNP was from domestic consumption, and need for exports would have been negligible.

Knowing when Orwell wrote this, in about June 1947, gives us a clue as to where he got this funny notion. Apparently he’d just read something in the papers pertaining to the newly-proposed Marshall Plan. I doubt Orwell knew where the story originated, or detected its ring of Marxian economics; but that is essentially what it was. Right about this time, the Soviet Foreign Minister, Vyacheslav Molotov, was putting out a tale that the European Recovery Plan, aka the Marshall Plan, had an ulterior motive: to forestall an inevitable and approaching depression due to American war debts and its unsold “surplus goods.”

Shortly after Secretary of State George Marshall gave his so-called “Marshall Plan Speech” (at Harvard’s commencement on June 5, 1947), Molotov had asked the top Soviet economist, Yevgeny “Jeno” Varga,[8] [9] to provide a report on the American economy. Specifically, he wanted Varga to “assess motives” behind this proposed aid plan. Varga came back with a suitably dire forecast: the US was facing a depression nearly the size of the Great Depression of the 1930s, with ten million unemployed and a twenty percent drop in GNP.

Per Varga, the apparent rationale for the Marshall Plan was that by lending billions in credits to Europe, the US could get rid of its “surplus goods” (as it was suffering from a “crisis of overproduction”). It could thereby avoid the forthcoming economic collapse – temporarily, at least – even though the countries to which it was “lending” credits were themselves bankrupt. Varga most likely did not believe what he wrote here. In 1946, he had written an in-depth economic study putting forth the thesis that because of changes in the American economy and government, it was no longer subject to the classic boom-and-bust “Crisis of Capitalism.” But now he was simply telling Molotov what Molotov wanted to hear.[9] [10]

And so, when Molotov went to Paris to meet the British and French foreign ministers at a preliminary conference on the Marshall Plan (this is still June 1947), he told them he believed the proposed Plan was really conceived in America’s own interest, “to enlarge their foreign markets, especially in view of the approaching crisis.” To no one’s great surprise, Molotov soon announced that neither the USSR nor any of the Communist satellite states would be participating in the European Recovery Plan.

With the passing months, Soviet propaganda evolved somewhat. In September, Molotov’s deputy and eventual successor, Andrei Vyshinsky, told the UN General Assembly that “[t]he United States . . . counted on making . . . countries directly dependent on the interests of American monopolies, which are striving to avert the approaching depression by an accelerated export of commodities and capital to Europe.”[10] [11] This soon turned into a more pointed accusation, that the US was setting up a “Western Bloc” as an economic and political beachhead. Soviet spymaster Pavel Sudoplatov explained that “the goal of the Marshall Plan was to ensure American economic domination of Europe.”[11] [12]

What were these “surplus goods” that the US supposedly wanted to offload onto Europe via the Marshall Plan? Mostly, they were the same goods that America had been providing all along: grain and fuel, primarily coal. (While western Europe had endless reserves of coal, the mines in Germany had been so damaged that Europe suffered from severe coal shortages for the first few years after the war.) When European countries bought these with Marshall credits beginning in 1948, it freed up their own capital for “recovery” uses. And, pace Varga and Molotov, America was not disposing of these goods in order to forestall an economic crisis. There wasn’t even a recession in 1947 or 1948; just a mild downturn that came in 1949.

But the notion of “surplus goods” and its Marxian companion, the “crisis of overproduction,” found their way into an obscure corner of Nineteen Eighty-Four. They provide the stated (though rather illogical and unnecessary) rationale for eternal war, as set forth in The Theory and Practice of Oligarchical Collectivism:

The primary aim of modern warfare (in accordance with the principles of doublethink, this aim is simultaneously recognized and not recognized by the directing brains of the Inner Party) is to use up the products of the machine without raising the general standard of living. Ever since the end of the nineteenth century, the problem of what to do with the surplus of consumption goods has been latent in industrial society. . . . The war, therefore, if we judge it by the standards of previous wars, is merely an imposture. It is like the battles between certain ruminant animals whose horns are set at such an angle that they are incapable of hurting one another. But though it is unreal it is not meaningless. It eats up the surplus of consumable goods, and it helps to preserve the special mental atmosphere that a hierarchical society needs.[12] [13]

It’s all a joke, of course: Oligarchical Collectivism is not a serious treatise even within its fictive realm. It’s something that O’Brien and his colleagues concocted (or so O’Brien tells us) as a plausible excuse for a revolutionary tract that the non-existent Goldstein might write. It puts forth “the problem of what to do with the surplus of consumption goods” as though that were a real conundrum, one that can only be solved by constant pseudo-warfare.

It would have been quite enough just to say fake wars provide “the special mental atmosphere that a hierarchical society needs.” But Orwell apparently had export markets and “surplus goods” on his mind, so he threw those in as well.

This tortured, unnecessary explanation ties up nicely with the alternative predictions Orwell offers in his Partisan Review article. As I said, he doesn’t really say much about socialism, and he doubts European unity, but he puts an awful lot of (overly) complex thought into how it’s all going to end. He’s writing this while he’s mainly focused on Nineteen Eighty-Four, so we end up with three James Burnham-esque scenarios of what may face us when the bombs start a-flying:

As far as I can see, there are three possibilities ahead of us:

[2] [16] One sometimes hears that the Morgenthau Plan for the starvation and pastoralization of Germany was floated as an idea but sternly rejected. Actually, as Joint Chiefs of Staff directive No. 1067 [17], it was the basis of American occupation policy, effective from April 1945 until July 1947. Both the US and the Soviet Union dismantled German industrial plants in this period.

[3] [18] There are countless sources for this subject, but Benn Steil’s 2018 book, The Marshall Plan (New York: Simon & Schuster, 2018), gives a detailed overview of the economic crisis.

[5] [20] Macdonald’s most thorough examination of Wallace and company was in the Summer 1948 issue of Politics.

[8] [24] Jeno Varga was a Hungarian Jew (his real name was Eugen Weisz) who had been in the Hungarian Communist Party since the Béla Kun days in 1919. After this, he fled to the USSR and became Stalin’s longtime economic adviser. Like Molotov in the late 1940s, Varga was about to fall out of favor.