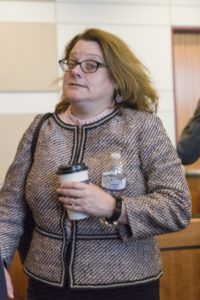 It has been quite a week on the legal front for the Dissident Right. In probably the most important legal defeat to date for the radical Left, an Ohio jury has awarded $44 million in compensatory and punitive damages (and legal fees which could add another thirty percent to the $44 million) to the owners of Gibson’s Bakery in their libel lawsuit against Oberlin College and its Dean of Students, Meredith Raimondo. To make matters even sweeter for the bakery (pun intended), it appears that Oberlin’s insurer has already taken legal steps to ensure that the money will not be paid from the college’s general liability policy.

The Gibsons sued the college and Dean Raimondo for libel, slander, interference with business relationships, interference with contracts, deceptive trade practices, intentional infliction of emotional distress, negligent hiring, and trespass as a result of Oberlin’s and Dean Raimondo’s orchestration of student protests and spreading of knowingly false and libelous materials accusing the Gibsons of a long history of racism. Why did Oberlin and Dean Raimondo decide to attack the owners of this venerable business institution that is in its fifth generation of ownership by the same family? The Gibsons had the temerity to bring shoplifting charges against black affirmative action students who were caught in the act, and who later pled guilty to the crime. Of course, in the rancid SJW swamp of Oberlin College, the guilt of the affirmative action black is irrelevant; the mere leveling of charges is ipso facto evidence of “racial profiling.” In the past five years, forty Oberlin College students have been caught shoplifting at Gibson’s Bakery; only six were affirmative action blacks. Some profiling.

The case was, for the most part, ignored by the mainstream media. This is not surprising, since it most definitely goes against the official narrative. The case was followed, very closely and very accurately, however, by the Website Legal Insurrection [2], and I urge everyone to read through the great reporting that Professor Jacobson and his colleagues did throughout the several years that this case traveled through the legal system. This case is a textbook example of the type of lawfare that the Dissident Right must engage in every day, and should have been doing for the past three years.

The focus of this article, however, is not legal strategy. I wish to shed some light on the career and character of Dean Meredith Raimondo, who was the chief instigator and organizer of Oberlin’s libelous attack on the Gibson family. According to her Webpage [3], Raimondo has been at Oberlin since 2003, and joined the faculty as a professor in the “newly formed Department of Comparative American Studies.” Now, what is Comparative American Studies? In her own words: “CAS focuses on the comparative . . . how diversity affects Americans at home and abroad, and what this means when we look at the role of the United States in a global context.”

Besides the infelicity of the description, Raimondo’s definition is disingenuous. There is nothing comparative in what she is describing. Until 2016, however, there was an academically accredited School of Comparative American Studies at the University of Warwick in England [4] that described its intellectual mission in very different terms:

Most American Studies degrees focus on the USA, or the USA and Canada. However, the History, Literature and Culture of the Americas degree at Warwick looks at the Americas as a whole – the USA and Canada, Latin America, and the Caribbean – offering multi-disciplinary study of this important region of the world.

The University of Warwick’s program of study is what we normally call an “area study” – that is, a degree program that focuses on a particular part of the world in all of its various aspects. The program that Raimondo describes is not an area program, but a course of study that is devoted to the ideology of diversity.

To put it bluntly, Meredith Raimondo is a pseudo-scholar in a pseudo-academic department pursuing a pseudo-discipline. Her “intellectual” endeavors are less academically legitimate than the Departments of Ideology that used to infest Soviet and Warsaw Pact universities. The courses that Raimondo teaches span “the themes of gender and sexuality, race and ethnicity studies, social justice, and HIV/AIDS.”

The complete list [5] of courses in Oberlin’s Department of Comparative American Studies is as follows:

CAST 202 – Visible Bodies and the Politics of Sexuality

CAST 232 – History of Race in American Cities and Suburbs

CAST 301 – Practicum for Field Based Research

As you can see, there is nothing comparative in this list of courses. It is a litany of courses dealing with sexual deviancies, minority grievances, and identity politics, alongside politically correct balderdash. There don’t seem to be many Europeans or heterosexuals in those “Americans” that Oberlin’s Comparative American Studies Department claims to be comparing. What, then, justifies the department’s title? The reason, I believe, is that a title that actually described what this department is about would be off-putting and too obvious for the public. Comparative American Studies is a title that tries to glom onto the academic respectability of Comparative Literature, which actually has a storied past. Meredith Raimondo, however, is neither Cleanth Brooks nor Jacques Barzun.

In 2014, Raimondo was appointed the head of the Title IX Compliance Office at Oberlin. This office put her in charge of the Kafkaesque disciplinary trials that exist on so many American college campuses in which male and/or white students are automatically presumed to be guilty, and generally are not even afforded the opportunity to defend themselves, while any idea of due process is laughed at. In a YouTube video of a panel on Title IX in which Raimondo participated four years ago at the far-Left American Constitution Society for Law and Policy [6], Raimondo complained that the presence of lawyers tended to make disciplinary hearings become legal procedures rather than educational experiences. Then, at about 42:30 into the video, Raimondo complains that too much is made of cases that are difficult to adjudicate. She even claims that the term “grey area” is an attempt to demean women “and their experience of violence.” I am sure that Dean Raimondo is very confused about the concepts of borderline cases or grey areas, because in the Department of Comparative American Studies at Oberlin College, there are never any grey areas; the ideology is perfect, complete, and inflexible.

The upshot of all of this is that there can be no doubt that Meredith Raimondo was a semi-educated arrogant SJW time bomb that could have gone off at any time. And when she went off, it cost Oberlin College in the mid-eight figures.

But there is another aspect of Meredith Raimondo that has gone unnoticed. A perusal of her publicly-available Goodreads account [7] (please, everyone, download this before it is eventually memory-holed) reveals that Dean Raimondo’s reading list has some pretty shocking selections. Of course, there are the obligatory SJW tomes, such as José Esteban Muñoz’s Cruising Utopia: The Then and There of Queer Futility (to which Dean Raimondo only gave four stars – I guess it wasn’t queer enough) and Sarah Schulman’s Ties That Bind: Familial Homophobia and Its Consequences (again, only four stars). But those are just to keep up SJW appearances. The books to which she consistently gives five stars are what seem to be every single novel in the Master and Commander series by Patrick O’Brian. Yes, after a hard day of libeling hardworking bakery owners, falsely accusing male Oberlin students of unspecified sex crimes, and covering up for the actual crimes of black affirmative action students (and throwing in the occasional guest lecture descrying colonialism in CAST 318 – Seminar: American Orientalism, or disparaging the patriarchy in CAST 217 – Introduction to Feminist Science Studies), Dean Raimondo goes home, kicks off her Birkenstocks, opens up a new box of wine, jumps into bed, and reads novels set at the height of British imperialism that were written by a dead European male. She might complain about it all day long at the office, but when the Dean goes home, she loves herself some toxic masculinity.

The hypocrisy doesn’t end there. Dean Raimondo gives Alice Walker’s The Color Purple only three stars, which is the same rating she gives to Mark Twain’s Tom Sawyer. The evidence is online and available for everyone in the world to see. Meredith Raimondo – who claims to be a radical feminist and friend of the LGBTQBBQEDPDQPOC community – judges The Color Purple (perhaps the greatest novel ever to be written in the history of the world!) to be no better than a racist screed by Mark Twain (whose characters routinely use the “N” word!).

Say it ain’t so, Meredith!

But seriously, if I were a white male literary scholar and read a paper at the Modern Language Association in which I stated that Alice Walker isn’t a very good novelist, or that Mark Twain is every bit as good as Alice Walker, I would probably lose my job if untenured; and if I were tenured, Dean Raimondo and her colleagues at the Department of Comparative American Studies at Oberlin College would probably be organizing petition drives and student protests to hound me out of my job.

So all I’m asking is that Dean Raimondo be judged by the same criteria by which she judges others. After all, what’s sauce for the cis-goose is sauce for the cis-gander. By her choices of reading material, Dean Raimondo has proven herself to be ideologically impure. She has exhibited anti-feminist tendencies and shown unrepentant signs of heteronormativity. She has belittled the African-American body of Alice Walker and all other writers of color. By her privileging the space inhabited by white patriarchal colonialists like Patrick O’Brian, she has made Oberlin College an unsafe space for women of color, as well as queer, transgendered, bisexual, gay, lesbian, fluid gender, trans-human, and indigenous peoples. I urge all members of the Oberlin community to demand that the Oberlin College administration fire Meredith Raimondo immediately. Furthermore, I urge the administrations of Emory and Brown universities to rescind all of Raimondo’s degrees and academic credentials, and that Raimondo be deplatformed on all social media and denied access to any financial institution.

We cannot allow a Nazi like Meredith Raimondo to continue to spew her hate.