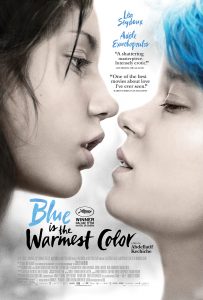 Some years ago, the European “cultural elite” was shaken up by a – somewhat insincere and artificial – “controversy” surrounding the latest blockbuster by one of its most politically-correct figureheads: Tunisian-French film director Abdellatif Kechiche. Within the French media establishment, Kechiche had already gained a considerable reputation as a subtle (artistically well-calibrated) but effective (emotionally “catching”) cinematographic propagandist for mass immigration, but in 2013 he decided to take his contribution to the culture-nihilist “deconstruction” of French civilization one step further by launching a frontal assault on French indigenous culture itself. With La vie d’Adèle – Chapitres 1 & 2 (The Life of Adèle – Chapters 1 & 2, released in English as Blue Is the Warmest Color), Kechiche added his considerable weight to the all-out mainstream media offensive aimed at converting the French youngsters to the cause of “alt-sexuality.”

Remarkably, La vie d’Adèle is not set within Kechiche’s regular subject group, specifically his own North African immigrant milieu, but rather within indigenous French society. Even if his film sketches the proper politically-correct background of “diversified” high school and street life befitting grand replacement times, its focus is clearly on two lily white girls as protagonists. They are firmly placed in the bland provincial life of a northern French city, embedded in colorless (rudderless, value-free) “average” families and committed to the late-Fifth Republic’s ideal of existentialist hedonism: they are, in a word, the perfect creatures of Kechiche’s soixante-huitard dreamworld. Thus, La vie d’Adèle explicitly holds up Sartre as the ultimate worldview reference point for young people, and it implicitly assumes General Confederation of Labor (CGT) activism is part and parcel of their standard behavioral modus. La vie d’Adèle is constructed around the “alt-sexual” Werdegang of the eponymous heroine: an indigenous teenage girl who struggles with the emotional and physical tensions of a problematic “sexual orientation.”

Apparently, the director feels that the real subject of the film, specifically the “alt-sexual” self-deconstruction, is better narrated in the context of indigenous French society than in the context of his own North African immigrant community. Did Kechiche merely fear negative (“Islamicist”) blowback from “his own people” – was this the reason that he chose two French-French instead of Tunisian-French girls for the risqué acting required of the main characters? Or did more sinister motivations enter into this equation? Did he assume that girls of his own ethnicity were “too good” for the top-heavy “role-playing” he had in mind for his main protagonists, i.e. for an overdose of lesbian experiments that can perhaps only be properly “owned” by disposable infidel indigenous girls? If this last question is answered in the affirmative, then Kechiche’s La vie d’Adèle probably marks the final “inverse cultural colonization” of France, i.e. the point at which immigrant “culture authorities” have taken over public discourse and are allowed to enjoy the degradation of indigenous women with impunity.

These questions aside, the artificial “controversy” surrounding Kechiche’s film, which is loosely based upon Julie Maroh’s 2010 comic (almost literally strip) book Le blue est une couleur chaude (Blue Is a Warm Color), and which won the prestigious Palme d’Or (Cannes Film Festival) and Louis Delluc (best French film) prizes, obviously revolves around its explicitly sexual charge. It should be stated that this charge reaches beneath the “porn” genre: La vie d’Adèle focuses on voyeurism, pure and simple. Kechiche thinks it necessary to let his audience share in an obscure obsession with the bedroom secrets of French teenage girls: no in-depth study of Freud is required to analyze Kechiche’s “peep show” in terms of inter-ethnic instinctual complexes and baby boomer lust projections. From that perspective, a New Right film review of La vie d’Adèle may seem an exercise in futility; but perhaps there is more than meets the eye. In two respects, Kechiche’s postmodern “masterpiece” touches upon “weak spots” within contemporary New Right discourse.

First, La vie d’Adèle offers a rare insight into the “alt-sexual” experiential swamp into which many indigenous Europeans have sunk after half a century of Culture Nihilism – at least to the average male viewer, who may tolerate visualized female homosexual “activity” for a longer time than its inter-male counterpart. The “problem” of dealing with long-legalized and all-pervasive “alt-sexuality” – now a new societal “standard” that remains unacceptable to the largely socially-conservative and anti-libertarian instincts of New Right supporters – constitutes an important source of conflict within the New Right. Many New Right publicists and activists have difficulty accepting the combination of “alt-sexuality” and “nationalism” that they note in some of their (potential) comrades and allies. Despite the fact that both historical and contemporary reality (e.g., Pim Fortuyn as leader of the Dutch patriotic resistance and Renaud Camus as leader of the French Conseil National de la Résistance Européenne) prove them wrong, many people within the New Right view this combination as impossible, unsuitable, and undesirable. They fail to realize that an anti-“alt-sexual” political agenda is only appropriate to the extent that it combats deliberate social “deconstructions” (gay marriage, gay parenthood, gay education) and militant anti-traditional ideologies (sexual revolution, fourth generation feminism, transgenderism). At the point that any such agenda overreaches itself – as in senseless inter-personal intolerance and inappropriate interference in the private domain – it transgresses two important boundaries: (a) the Western civilizational boundary of individual autonomy, and (b) the Realpolitik boundary of what is effectively possible. To “make do with what is at hand” is a sensible maxim not only within the New Right (as in choosing competent leaders and employing efficient personnel), but also outside it: to gain the confidence of a populace that has been brainwashed and deformed by half a century of Culture-Nihilism requires a maximal dosage of patience, tolerance, and prudence.

More important, however, is the second “weak spot” of the New Right that is touched upon by La vie d’Adèle: the difficult relationship of the New Right with postmodern “high culture,” and especially with the multiple “boundary-crossing” culture and art forms produced by contemporary artists. Obviously, La vie d’Adèle falls within this category: in terms of technique and vision, Kechiche’s film obviously belongs to contemporary “high culture,” but it is also “boundary-crossing” in an ethical as well as an aesthetical sense. Nobody can deny that it is a masterpiece that directly follows from the technical perfectionism and the magical-realist symbolism of the French cinematic tradition. In this regard, it is interesting to note that Kechiche’s La vie d’Adèle provides a number of largely ignored, but nevertheless remarkable, inverse parallels with Kieślowski’s The Double Life of Véronique. Kechiche also explicitly lays claim to the “high culture” of old Europe in various references, such as the literary reference to Pierre de Chamblain de Marivaux (La vie de) and the art historical reference to Pablo Picasso (Período Azul). But Kechiche’s “high culture” is highly un-European, even anti-European: it is globalist, postmodern, and post-European. Elements of older European “high culture” are taken out of context and remain entirely misunderstood: the director uses them without any sense of – and without any respect for – their original aesthetical and ethical meaning: he mis-uses and ab-uses them. Despite Kechiche’s undeniable technical skills – which is especially noticeable in his capacity for artistic synthesis (such as the application of “New Age” transcendental meditation technique and digital visio-ethemes) – these elements of La vie d’Adèle represent transparent attempts at a globalist cultural appropriation of European heritage. The effectiveness of Kechiche’s artistic rhythm (which depends on finely attuned dosages of emotional charge and psychedelic intoxication) is proven by the fact that his soundtrack remix of Lykke Li’s hit parade entry “I Follow Rivers” (which dates to 2010 in its original version) has managed to sensationally outshine its original (in June 2019, the original version had 64 million YouTube views, whereas the La vie d’Adèle version had 137 million).

But the one area in which Kechiche’s project is doomed to utter failure is in its attempt at cultural appropriation: if La vie d’Adèle proves anything, it proves that the abysmal divide between postmodern globalism and authentic European culture cannot be bridged. Everything and everybody that fails to make a choice between these two is bound to fall into a trap, in the same way that the life of the main protagonist, Adèle, is seen to fall into a dead-end abyss. In his film, Kechiche assigns a phony Arabic etymology to her name: ʽādil, meaning “justice”- but he fails to give its real etymology, which is Germanic (German, Dutch), adel, meaning “noble.” Thus, the New Right has a clear message for Kechiche: there is not much that is “noble” in Arabic voyeurs gloating over European teenagers, and there is not much “justice” in his globalist abuse of the European identity crisis.

It is almost a full century ago that Radclyffe Hall described The Well of Loneliness, in which Kechiche’s Adèle is seen to fall: Hall explored, recognized, and faced up to the heavy existential weight that is “alt-sexuality” – a weight that is strictly personal and that cannot be lessened by any “gay right” and any “lesbian film.” Hall’s honest record stands diametrically opposed to Kechiche’s vie en rose hallucination. Kechiche could have ended his film after that one single moment in which he manages to grasp something that is located above mere politically-correct culture-deconstruction: the moment that Adèle lies in the city park, next to her “blue angel” in the grass. At that one moment – before anything more “happens” – she is suspended between heaven and earth when her “Emma angel” catches her lost soul in her heaven-blue eyes. Then, that “angel-before-the-fall” says something that instantly reduces the entire “alt-sexuality” question to its true human dimensions: she says, “Perhaps this moment is too perfect.” Perhaps the best proof of Kechiche’s utter failure to come to terms with European culture is found exactly here: in his misjudgment of the European viewer – who does not need to see more: “Ei già il resto capirà” (He’ll understand the rest without being told).[1]

» The Hidden Meaning of Resident Evil 4