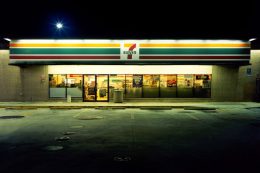 Remember what they stole from us.

“The past is a foreign country; they do things differently there.” — L. P. Hartley

There’s an old time capsule video from 1987 titled “2:30am at a 7-11 near Disney World [2]” that has made its way around the Internet over the years and has been viewed millions of times. Time capsule videos from the 1980s and early 1990s are often a bit grainy, depicting rather ordinary occurrences and interactions. They often depict completely ordinary events like kids buying snacks and talking to strangers in a 7-11, and yet they frequently get thousands to millions of views. These videos give a fleeting glimpse into how our nations once were, effectively depicting countries that no longer exist. They show younger people how safe, clean, friendly, and white our nations once were. Videos like this one leave some in awe at how happy and carefree people could once be in their local convenience store.

The corner store experience and 7-11 Nationalism is a sharp metaphor for the gradual decline of the West and the slow march of diversity that encroaches upon every facet of our lives.

I remember going to gas stations late at night with my dad when I was a kid, when I couldn’t sleep. We would get snacks. He knew the names of everybody who worked the late shift. They always seemed to play cool ‘80s music. That’s the America we were supposed to have.

As I grew up, I kept going to convenience stores often. I always enjoyed the experience and would take my time: grab a soda, chat with the clerk, maybe talk with a friend in the parking lot. But just in the course of my own short life thus far, there are places I went not all that long ago that were awesome, fun, clean, and safe that are now infested with aspiring rappers and welfare tourists – and nobody speaks English.

Not that long ago, I stopped at a convenience store in one of the most “diverse” parts of the city to buy a soda as I was driving through. The experience was “enriching,” you might say, in that I did learn something new about how non-whites live. The establishment’s front door was chained shut and locked. The windows were all barred. The clerk asked what I wanted through a microphone, and I had to put my money in a bulletproof box from outside. The clerk then closed the window on the box, got my soda and change, and then put it back in the box and closed it on his side so that I could receive it. The way that low-trust, low-impulse control populations live is wild. When my dad was growing up, the neighborhood I stopped in was nearly entirely white. Now, it’s a ghetto. There was once a gas station on the corner where I stopped, and it had no bars or chains or bulletproof glass. But then the blacks and Hispanics started moving in, and the whites moved away. Not even blacks want to live around other blacks; that’s why they move to white neighborhoods in the first place, perhaps not realizing that wherever they go, they bring crime and dysfunction with them.

The chill vibe that once existed in places like your neighborhood 7-11 has been shattered as a result of non-white migration and forced racial integration. Meandering through the aisles looking for snacks to eat during a movie with your friends or girlfriend is part of a bygone era, and we know who is responsible. Today is the age of looking over your shoulder, wondering if the group of loud urban youths gathering outside are about to commit their next felony, and being gawked at menacingly by a car full of dirty cholos, as if you’re the one in the wrong country.

We no longer have a nice, white country. We are forced to live in a sort of open-air prison camp, being endlessly terrorized in ways that are increasingly being normalized. We should not have to deal with gangs going on 7-11 robbing sprees [3]. 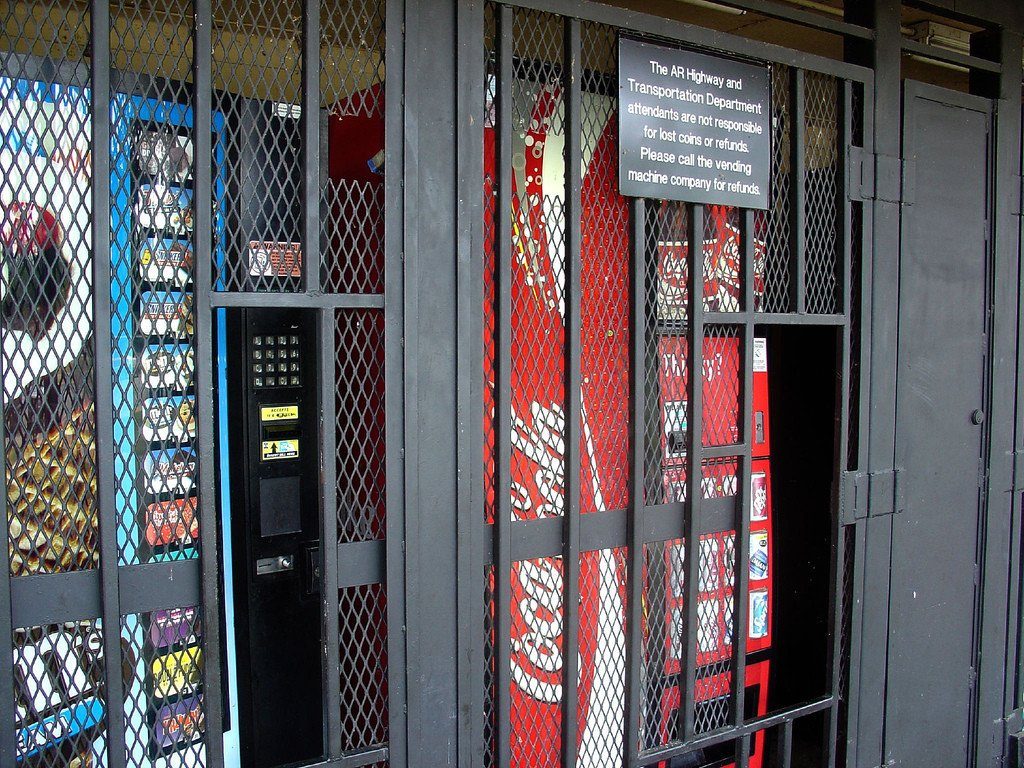 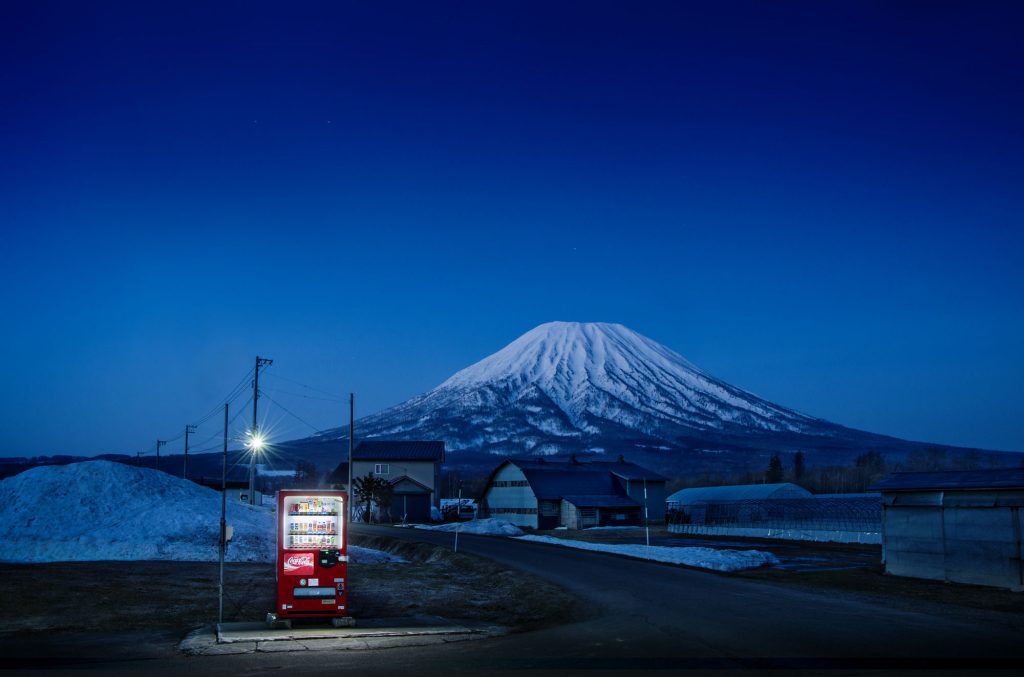 There are two types of civilizations.

In one such instance, while robbing a white female convenience store clerk, a black criminal took the time to drag another white woman into the store, tie her up with duct tape, pour lighter fluid on both of them, and set them on fire [6]. The video of the attack is reminiscent of a necklacing scene from South Africa.

This woman was working her honest job at a gas station and ended up being set on fire by diversity. Corner stores are now war zones where you see all the same depravity as in the streets of the Congo. We didn’t choose this. If you take the time to light somebody on fire after you’ve already tied her up and you have the money, you’re doing it out of pure hatred. So it’s not about the money any longer. Rather, this is an example of an actual hate crime that will never get mentioned in the mainstream outside of the local news.

Another recent video shows two blacks pistol-whipping a pregnant white woman during a convenience store robbery [7]. A person trying to make an honest living shouldn’t have to fear for his or her safety just to make it through a shift. We shouldn’t have to live this way.

What 7-11 Nationalism represents is all of the minor things that we once took for granted, that have been ripped away.

If you can’t walk into a convenience store at 2:30 AM to get a snack on a Friday night while leaving your car running and unlocked with your girlfriend waiting in it, you don’t live in a free country. People used to do that kind of thing. I’ve heard the stories. This was once a nice country.

Worthless libertarians and “conservatives,” who in fact conserve nothing at all, talk an awful lot about freedom and tyranny. Yet they are utterly blind to the everyday tyranny of not being able to live in a safe neighborhood. They never mention the tyranny of being forced to move every few years to a “better school district.”

They make no mention of how you can no longer allow your children to ride their bicycles to the gas station. Nor do they admit why we are now forced to prepay for gas, and why we now have to have our receipts checked by security when leaving a store even when you’re white, even though everyone knows full well that it’s not whites who are doing much of the shoplifting. Nobody talks about the constant low-grade anxiety that comes with living among these people who belong in human zoos — always having to double-check that your doors are locked, and not being able to take your eyes off your loved ones for a second without having to worry about their safety.

Ebba Åkerlund was an 11-year-old Swedish girl who was run over by an Arab terrorist as she was walking home. She was partially deaf, and likely did not even hear death coming for her. It wasn’t even world news when it happened.

Likewise, Pat Mahaney, a 46-year-old white man in Ohio, was walking home when six black teens pummeled him into a coma, “because they were bored.” Pat never recovered from his injuries and died eleven months later. Our people cannot even walk home without fear anymore. What good is “freedom” when you can’t enjoy the nation your ancestors built for you and the freedoms that they established? 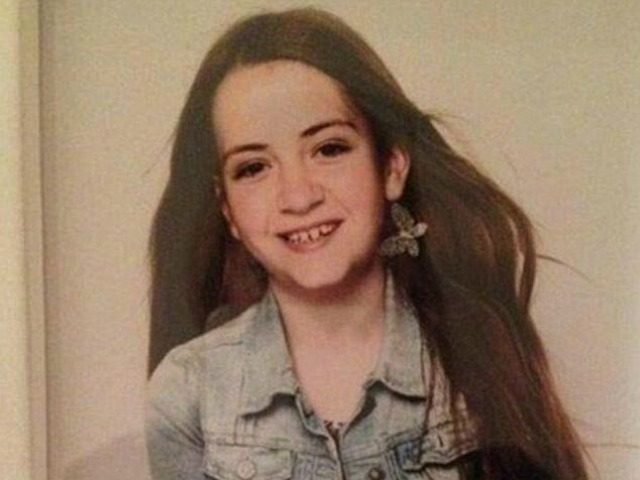 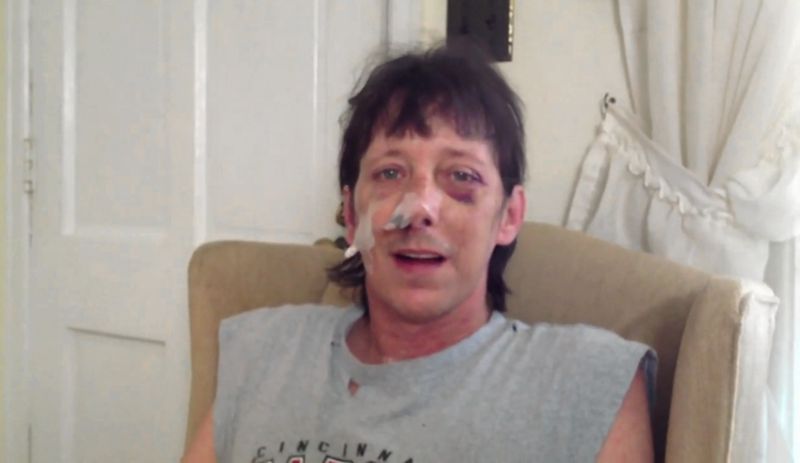 Everything has been taken from us; perhaps most notably, our peace of mind.

7-11 Nationalism is about all the little things and day-to-day experiences that matter to our quality of life. The GDP can be at an all-time high, but if you can’t safely go to buy a soda, are you really any better off? Sure, your TV is bigger and crisper than ever, but do you know the first name of the guy who works at your grocery store? Do you even want to know his name? One of the more unfortunate aspects of ethnic diversity is that as social cohesion and trust break down, in-group trust also declines. Not only are we alienated by the presence of racial outsiders, but they cause us to be less trusting and sociable with those of our own kin as well. Even when the clerk is white, you are less likely to know his name in a diverse country, which robs us of the relationships we could have cultivated under different circumstances, leading to a more enriched society.

The experience at your local convenience store is, arguably, a more relevant indicator of the quality of life and social health in your nation than economic factors. When you pull into the parking lot, get harassed for money by some aspiring rappers, are nearly run over by a hijab-wearing woman in a new SUV as you cross the parking lot, and are unable to communicate with the Indian clerk while you’re being given the eye by urban youths, you come out of the experience feeling annoyed and angry. This is diversity fatigue: the result of the constant low-grade harassment and alienation we experience just by living among these vile racial aliens.

Diversity fatigue and psychological terrorism are the norm in today’s multicultural polyglot. Seeing a Mexican woman use her EBT card to buy snacks for her six children who will soon be outvoting and replacing you is a form of psychological terror. Seeing people in hijabs in a Western setting is jarring and unnatural. You know none of this is “normal,” but you’re forced to accept it all the same.

Mass migration and the fruits of “civil rights” legislation are coalescing to create an environment that is utterly inhospitable for us. Whites are being forced to live among a violent, impulsive, high-time preference scourge, with no way to legally segregate ourselves from them. It’s a form of anarcho-tyranny: the criminals are allowed to commit crimes and operate rather freely in society while the innocent are forced to live among them, while the law does little to protect them. The authorities allow criminal aliens to enter the country and will enforce the law against a white person who tries to escape forced integration. By making it impossible for whites to choose who they live with, we have been forced to abandon the cities we built and the towns we grew up in for the next suburb. 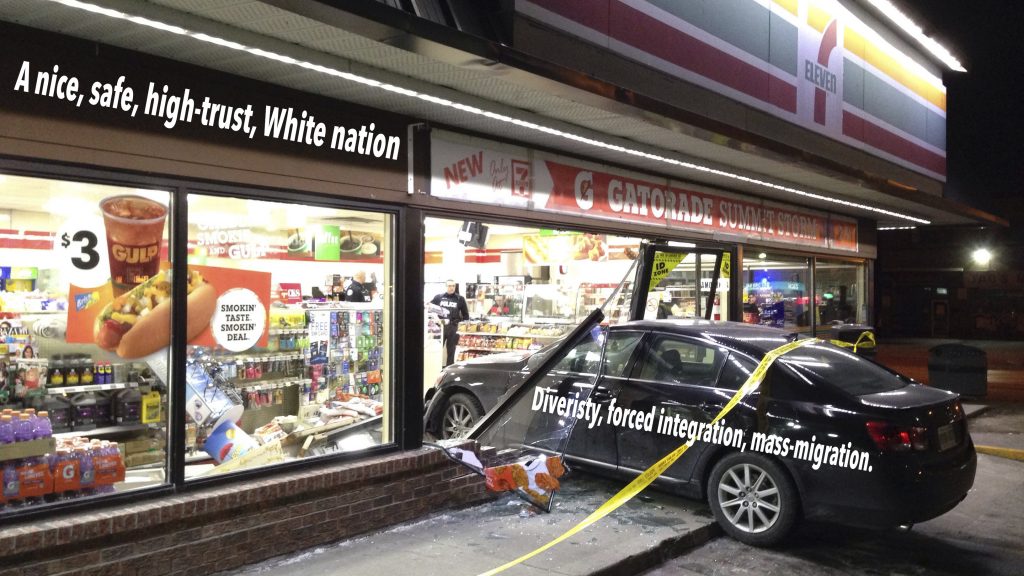 As this plague advances further among white communities, so too will the level of crime and its depravity. No aspect of our lives will be the same. As diversity increases and the proportion of whites falls, societal dysfunction will continue to rise. The entire country will end up consisting of nothing but caged-in stores manned by staffers behind bulletproof glass. Nowhere is safe and nothing is sacred as the march of diversity continues onward.

7-11 Nationalism isn’t simply about the fact that you must pre-pay for your gasoline, or that the clerk is an Indian who speaks little English. It’s not about the everyday things that generally go unnoticed that have been taken from us. Rather, 7-11 Nationalism is a state of mind, one in which we make the choice to retake the city instead of fleeing it. It is acting on that inner voice that tells us, “These cities are ours. We built them. And we will take them back.”

We’re going to take back all the corner stores. I want the very worst neighborhood in America to have a nice, safe 7-11 that women and children can safely visit at night. That’s my dream.

It’s part nostalgia, part lamenting a future that was stolen from us, part retaking our cities, and part mending what was broken. This is 7-11 Nationalism.