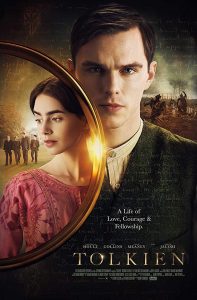 One of the advantages of reading biographies is that even if they’re not very good, there remains the consolation of having learned something. Sadly, this is one of the few positive things that can be said about the recent biopic Tolkien.

Biographies can be tricky to adapt for the screen. Filmmakers will want to adhere to the truth as much as possible while still being able to tell a coherent and thematic story. How much artistic license is too much? I’m sure the answer has to do with whether the subject is still living or whether his estate wields a lot of clout. In the case of beloved fantasy author J. R. R. Tolkien, the latter is most certainly true. Not only did the Tolkien estate recently disavow [2] Tolkien, it had also filed a multimillion-pound lawsuit over royalties from the wildly-successful Lord of the Rings films. I’m sure director Dome Karukoski and screenwriters David Gleeson and Stephen Beresford had to tread lightly when telling the story of the man commonly regarded as the father of modern fantasy fiction.

Perhaps as a result, Tolkien underwhelms. It tells the story of young Tolkien, from his impoverished childhood, through his school years, and into his time in the trenches of the First World War. The story ends in the 1930s, just as he puts pen to paper to write The Hobbit. Many passages in the film are slow and insipid, and, in general, the film suffers from a surfeit of earnestness. Tolkien (played by Nicholas Hoult) is a perfectly nice and sensitive young man. He has a genius for language; he’s haunted by fantastic visions; and he has a slight jealous streak regarding his lover Edith Bratt (played by Lily Collins, the daughter of rock star Phil Collins). Other than that, he’s unremarkable. If this were a fictional story about a fictional author, Tolkien would disappear without a ripple. Because the subject is so famous and important, however, the film has inherent informational value for those who care. Faint praise, I know.

Why Tolkien fails, however, is interesting. The story comes across as a jack-of-all-trades yet master of none. At any given point, it is about love, friendship, language, or war. These threads do not interconnect very well, leaving the story disjointed and confusing, and diminishing the power of its ending. It seems the filmmakers preferred to ape the major chapters of their subject’s life rather than tell a story with a proper beginning, middle, and end. Further, they refused to give the audience much of what it really craves: insight into Middle Earth and Tolkien’s great works The Hobbit and The Lord of the Rings. One would think that in order to sell tickets, the film’s producers would have basked as closely as possible in the One Ring’s glow. But they didn’t.

For example, the kindhearted and attentive soldier who accompanies Tolkien in the trenches is named Sam. Here was an opportunity to link Tolkien to the Samwise Gamgee character from The Lord of the Rings. But that didn’t happen. Richard Wagner’s Ring Cycle operas appear in the story as well, yet such an obvious connection to Tolkien’s future work never seems to turn a light bulb on in the young author’s mind. Instead of any direct links to the world of Frodo and Gandalf, we get a few mutterings from Tolkien and the occasional demonic images of dragons or death riders on horseback. This is not enough to scintillate in the way that, say, Johnny Depp’s J. M. Barrie did in 2004’s Finding Neverland. This film sets the standard for an author biopic, since it seamlessly weaves the author’s famous works into every aspect of the narrative. This does not happen in Tolkien, but could have.

Tolkien’s failure also reflects a lack of understanding of what makes a story exceptional. Not only are the film’s major threads disorganized, most of them come off as ordinary or incomplete when taken on their own. Just because young Tolkien formed lasting friendships with his school chums does not necessarily make this “fellowship” interesting. The kids are seen leaping along cobbled stones and sipping tea at trendy cafés, crowing about how they will change the world through art. Did the filmmakers not see how trite this is? Tolkien’s romance with Edith has a few nice moments, such as when they couldn’t afford to see one of Wagner’s Ring operas and instead act out the play themselves in the theater’s basement. Overall, however, there’s nothing special about it. They get in a spat over Tolkien’s jealousy; he leaves her to go off to Oxford after much handwringing, and they reconcile just as he is about to sail off to fight in France. As far as romances go, this is pretty weak tea.

As for the war scenes, to which we flash forward quite often, not much is there, either. J. R. R., who is desperately ill, scours the trenches to find one of his aforementioned school chums who has not been answering his mother’s letters. Not bad. Karukoski also portrays the trench war scenes impeccably, almost to the point of making them an homage to Stanley Kubrick’s brilliant Paths of Glory. There’s just not enough of them. The film suffers every time it cuts away from gripping war drama to the more pedestrian concerns of the lovelorn Tolkien at Oxford.

The thread of the film that works best was, for me, Tolkien’s interest in language. He makes up his own, and through it is able to spontaneously generate lucid and evocative myths. His story about the magic place “celador” and the intertwining black and white trees, which he shares with Edith, provides a memorable example. Hoult’s performance seems to get a jolt every time the topic of language comes up. Later in the film, he meets the eccentric philology professor Joseph Wright (played wonderfully by Derek Jacobi) who teaches him about the vital importance of language. “It’s the lifeblood of culture,” he tells his student while waxing on about how integral language is to the past, present, and future of a people. This is great stuff, and not just from a white or English identitarian standpoint. It’s where the film really has something new to offer. But as with the war scenes, there is too little of it; and almost no effort is made to connect young Tolkien’s philological passions to the elaborate flights of linguistic fancy found in his great works.

J. R. R. Tolkien holds a special place in the literature of the English-speaking world. He created a magnificent and enduring mythology while spearheading an entire genre of literature. He did so with a love for European languages and the grand, all-encompassing mythos they embody. It would be impossible for anyone identifying as white or English not to admire Tolkien for this. Tolkien may lurch through a barely tolerable biography of the great author and touch ever so slightly on these themes, but it stands in stark contrast to most other Hollywood films which de-prioritize European civilization and the role brilliant white men like Tolkien played in creating it. For all its faults, Tolkien does not do that, and so for now, at the very least, it will do.

Spencer J. Quinn is a frequent contributor to Counter-Currents and the author of the novel White Like You [3].